Parades held in early December have seen people dress up with curly wigs, bright lipstick and the black face paint to depict the character who is said to be black because he is a Moor from Spain.

But for the last ten years there have been widespread protests against the tradition and the latest move from public libraries could spell the end for the ‘racist’ parades.

The need to socially distance due to the coronavirus pandemic means that the annual parades will not be possible this year but the debate over the portrayal of Zwarte Piet has not quietened. 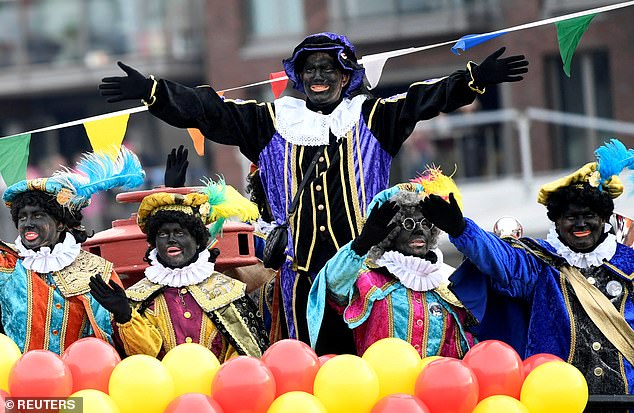 Images of the character first appeared in print in 1850 but now libraries have said that the books will be removed for being ‘contrary to good morals’.

The director at the Association of Public Libraries – Anton Kok – told the Het Algemeen Dagblad newspaper: ‘Everywhere there is a growing awareness that Zwarte Piet gives a stereotypical image of a certain part of the population and the libraries are moving along with this. 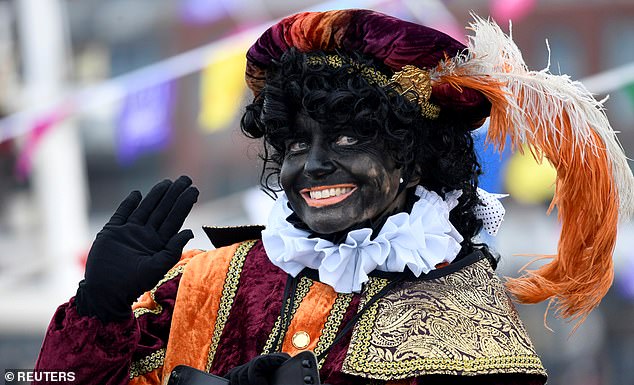 Parades held in early December have seen people dress up with curly wigs, bright lipstick and the black face paint to depict the character who is said to be black because he is a Moor from Spain (pictured is a parade last year)

‘Numerous books have been taken down over time for being ‘contrary to morals’. I am thinking, for example, of the children’s books in which the population of the Dutch East Indies was dismissed as patjakkers (low-life rascals).

‘Zwarte Piet is also contrary to good morals as far as I am concerned. It is more that libraries are linking up with the spirit of the times. White children don’t care about another Pete and black children find it strange and nasty, and that is what matters.

‘Some people also like fascism. And yes, that sounds crude, but I mean that a tribe cannot determine our policy. We see that libraries are taking on that responsibility en masse.’

He added that Kok said the Dutch Association of Public Libraries could not order all its members to remove the offending books but that librarians were making the right decisions without need for guidance.

The shift in public opinion in recent times has been underpinned by a change in direction from the Dutch prime minister Mark Rutte – who has in the past dressed up as Zwarte Piet himself.

WHO IS BLACK PETE?

The character first appeared in an 1850 book by Amsterdam schoolteacher Jan Schenkman.

Traditionally, Zwarte Piet is said to be black because he is a Moor from Spain.

In recent years, the character has become the subject of controversy, especially in the Netherlands.

In the wake of the killing of George Floyd and the Black Lives Matter movement, Rutte said this summer: ‘When I met people who said, ‘I feel incredibly discriminated against because the Piet is black,’ I thought: that is the last thing you want at the Sinterklaas party.’

He had up until then defended the practice, saying that it is a simple representation of a figure that ‘is black’.

A survey conducted by one Dutch current affairs programme last week revealed that support for the traditional depiction of the character has fallen from 89 per cent in 2013 to 55 per cent.

It comes as the Belgian publisher Clavis – the largest supplier of Dutch language children’s books – has said it will no longer support authors who include portrayals of the character in their books.

The company destroyed 7,000 books containing such images at the end of last month.

There has also been international pressure for change and in 2015, a United Nations committee on the elimination of racial discrimination urged the Dutch government to ‘actively promote the elimination’ of the racial stereotyping implied with the character.

Google also said last month that it would not allow adverts to be shown on web pages or videos featuring a ‘black face’ Zwarte Piet.