Tearful villagers tell Home Office officials they have ‘no choice’ but to protest over planned centre for 1,500 migrants at heated public meeting

Residents of a North Yorkshire village expressed outrage after a meeting with Home Office officials over plans for an asylum reception centre to be opened on a former RAF base.

Locals from Linton-on-Ouse met with officials from Priti Patel’s department and North Yorkshire Police about the plan to house 1,500 asylum seekers on the base.

Some of those present at the public meeting burst into tears after officials said the first asylum seekers could arrive in the former RAF training base before the end of the month. 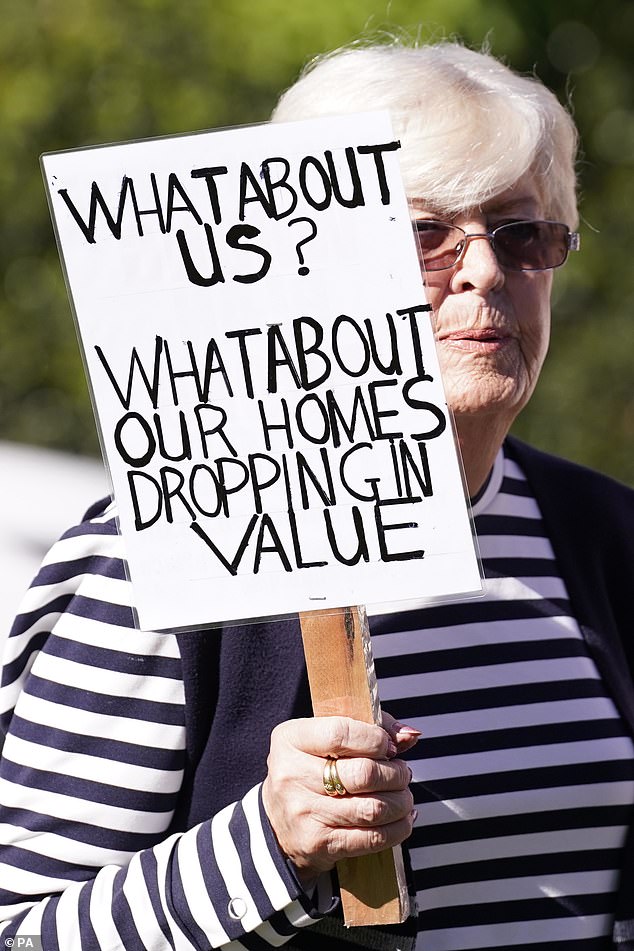 Campaigners have launched a protest against Government plans to open an accommodation centre for asylum seekers in Linton-on-Ouse, north Yorkshire 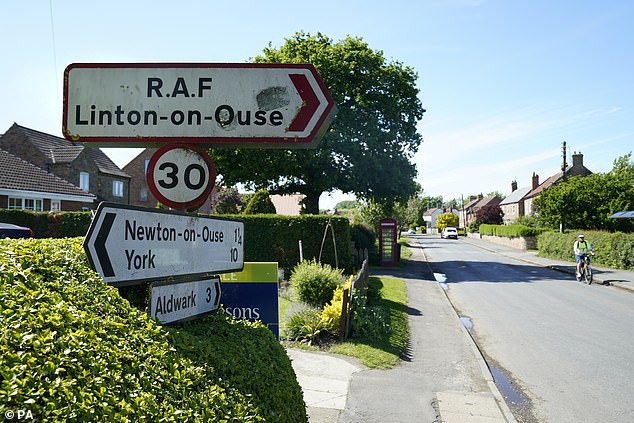 Home Secretary Priti Patel wants to house up to 1,500 asylum seekers on the former RAF Linton-on-Ouse 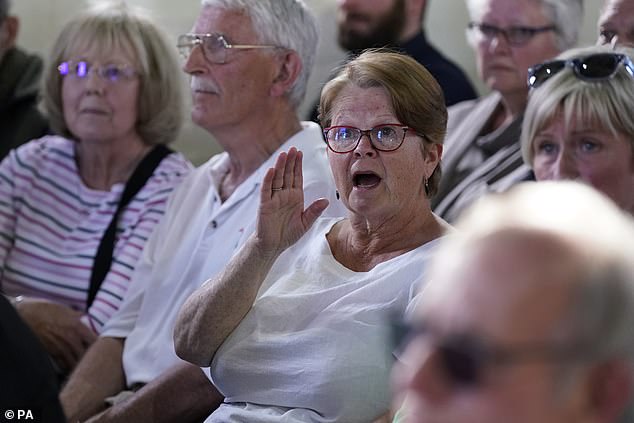 The Home Secretary’s plan is opposed by local Tory MP Kevin Hollinrake. He quizzed PM Boris Johnson in the Commons on Wednesday.

The MP for Thirsk and Malton claimed the proposal would ‘devastate the community’ as residents will not feel ‘safe to leave their homes alone’.

The Tory led Hambleton District Council is planning a judicial review of the government’s plan ‘immediately’.

Home Secretary, Priti Patel wants to open the centres before sending the migrants onwards to Rwanda for processing.

As many as 60 asylum seekers could arrive in Linton-on-Ouse by the end of the month. The centre will have the capacity to temporarily home 1,500 men. It is understood from the Home Office that the centre will include on-site facilities and that transport links to nearby towns and cities, such as York, will be available to those staying at the former military base.

Asylum seekers staying at the centre will be moved on after six months. 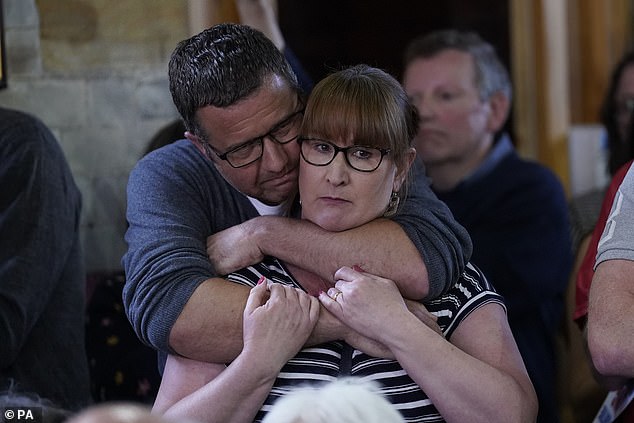 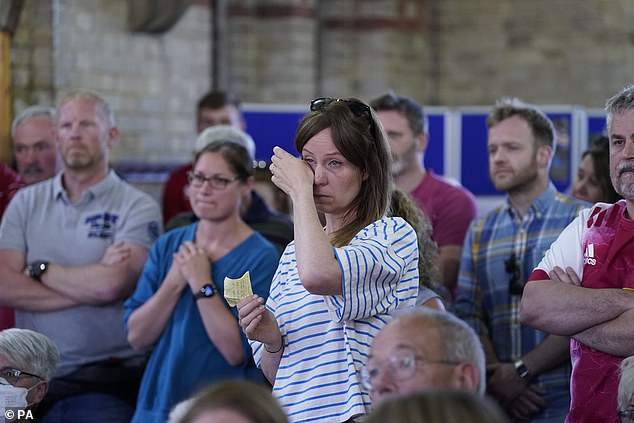 Home Office officials told the meeting the men on the former RAF base will not be detained and will be free to leave, however there would be security on the gate

But while Home Office officials tried to allay residents’ fears about the centre, which ministers have previously claimed would ‘provide safe and self-sufficient accommodation’, they were met with constant jeers and shouts of ‘rubbish’ from unimpressed locals.

Previously, locals had accused Ms Patel of ‘dropping a bomb’ on the village.

One woman, who was in tears as she spoke, said: ‘Villagers are in crisis. People are upset and people are leaving their homes. My property is the first “owned” property (next to the centre) where everyone will come and go. They will stand outside my property.’

Residents heard how security officers will guard entrances to the site, where CCTV will also be installed, but that asylum seekers will not be ‘detained’ inside the centre.

Detective Chief Inspector David Hunter added two police officers will patrol the village daily between 8.30am and midnight when the first asylum seekers arrive in Linton-on-Ouse.

One resident objected to the increased police presence, saying: ‘We do not want police in the village – we don’t want it to change from a sleepy village.’

Virginia Sharpe said the prospect of 1,500 men arriving in a village of around 600 people left her feeling ‘intimidated’.

She told Yorkshire Live: ‘We have a right to not have to change our lives so drastically because of something that no-one knew about until it was dropped on us like a bombshell, with no consultation.’

‘We think it is totally unfair. If I was walking down the street and came across a group of single young men – of any background – I would feel intimidated. A lot of women in this village are worried.’

Ms Sharpe added she had turned up to the meeting on Thursday ‘to stop’ the plans for the centre. 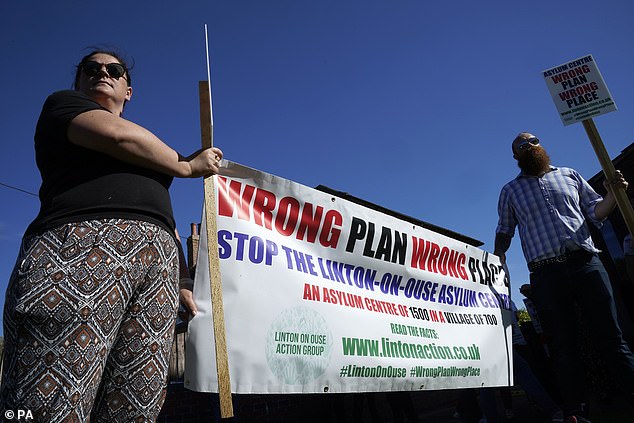 Richard Burke said: ‘I am really, really worried for families and children. My wife enjoys walking our dogs two or three times a day but she won’t be going out on her own (when the centre opens) because she will feel intimidated.

‘The single and only criteria that seems to have been considered here is the availability of the site. There has been zero consultation. It has just been dropped on us. Given the numbers that they are talking about bringing in, I can’t see how it would ever work.’

The Home Office said a ‘considered assessment’ had taken place before the site at Linton-on-Ouse was found to be feasible.

But officials accepted they would need ‘to work through’ individual concerns with residents in order to ‘bring everyone together’. It is understood residents will be invited to visit the centre before it opens where they will be given the chance to raise any concerns with officials. 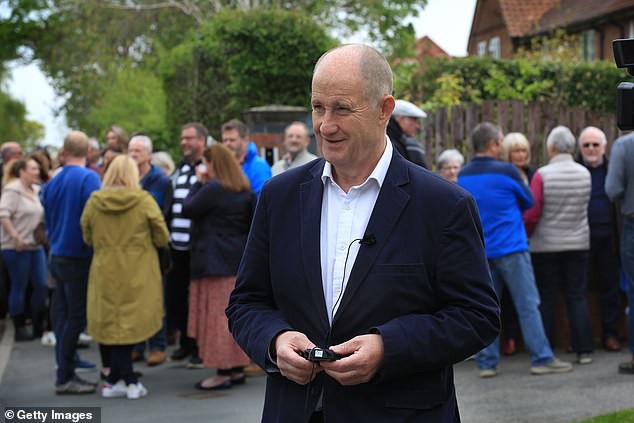 But one resident at the meeting said villagers feel ‘like a child that is being blamed for something they did not do.’ They added: ‘You are not grasping the concept of what you are doing to our village.’

Another woman in the audience was applauded when she said: ‘Whatever you say, you are not going to give residents any peace of mind.’

Another resident added: ‘Are they allowed the freedom of the village? Where is the security? Individuals can go where they want. Who is supervising them?’

A senior North Yorkshire Police officer said patrols have been increased and his officers will be taking heed of residents’ concerns.

He added that two police officers would be on patrol between 8.30 and midnight every day.

Zoe Metcalfe, North Yorkshire Police, Fire and Crime Commissioner, said this would be in place when 60 asylum seekers were at the site.

The first arrivals are expected at the site later this month.

She said that she didn’t want anyone to feel unsafe in their community, explaining: ‘I am not far away. We are going to do everything we can to make you feel safe.’

A resident claimed a police officer had told women to not wear short skirts outside, but Metcalfe said that it was unacceptable behaviour from the officer.

And another member of the audience was applauded when they said: ‘People are upset. 1,500 men are coming to our village of 600 adults.

‘What are you doing to carry out a proper impact assessment?’

Another frustrated resident added: ‘I don’t think you are grasping the concept of what you are doing to our community.’

The Linton-on-Ouse Action Group (LoOAG) commended a no-confidence vote in the Home Office, which was passed overwhelmingly by North Yorkshire county councillors on Wednesday.

Group spokesperson Dr Olga Matthias said: ‘In what now feels like a concerted effort, they have ignored established processes and protocols.

‘The Home Office, which should be at the forefront of the overarching objective of government – to keep its citizens safe – has set out to destroy this community and our way of life.

‘With no consultation, no planning permission and no risk assessments on any front, and despite overwhelming opposition from all sides, they are ploughing ahead with an insane plan to place 1,500 asylum seekers in a rural village.’

Hambleton District Council previously announced it is looking at legal action over the plan. It is understood the centre will open as soon as it is able to if the target of May 31 is not met.