England, Scotland and Wales have recorded another 230 hospital deaths from COVID-19 today, taking the UK’s official total to at least 35,571.

NHS England said 166 people had died in its hospitals, between the ages of 33 and 99, while 50 more victims were confirmed in Scotland and 14 in Wales.

The Department of Health is expected to announce an all-UK figure including care home deaths later this afternoon.

It comes as Public Health England testing data from yesterday shows that not a single case of COVID-19 have yet been diagnosed in London or the South East from swabs taken on Monday, May 18.

The regions are the two most populated in the country and are home to a combined 18million people – almost a third of the British population.

Officials have played down the numbers, suggesting that they may be the result of a technical hitch known to have happened over the weekend.

The numbers also showed that only 79 cases were diagnosed across the whole of England.

The statistic will inevitably rise in the coming days as more people who were swabbed on Monday get their results back. A total of 2,412 people yesterday received positive results from samples taken between May 13 and 18.

But it comes as the number of people catching the virus in Britain is believed to be falling rapidly.

Research by the University of Cambridge and Public Health England last week suggested that only 24 people each day are catching COVID-19 in London. 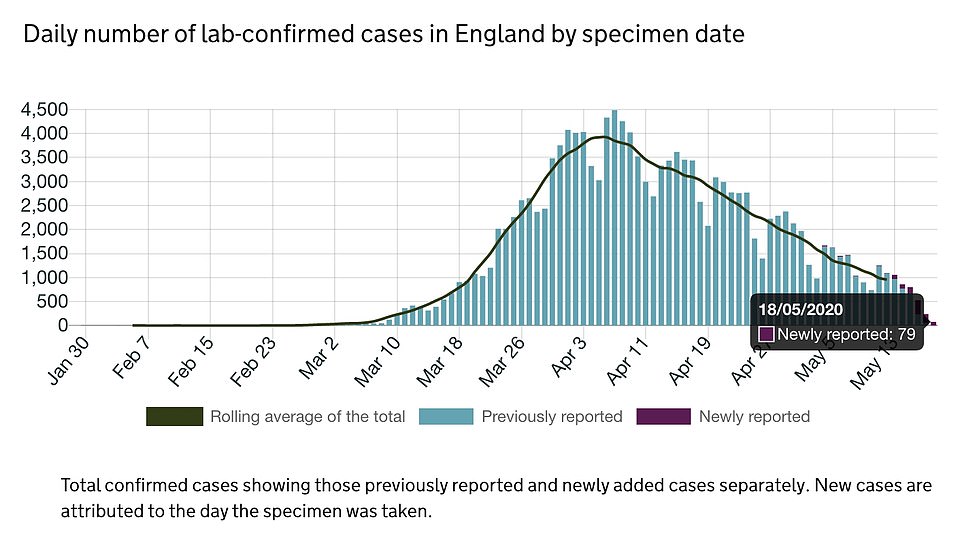 Public Health England data has so far found only 79 new coronavirus cases out of specimens provided on May 18. This number will increase in future as more people receive their results

It calculated that the crucial ‘R’ reproduction rate – the average number of people an infected patient passes the virus on to – has fallen to just 0.4 in the capital, with the number of new cases halving every 3.5 days.

The Cambridge team estimated that 1.8million people in London (20 per cent) have already had coronavirus.

They claimed between 10 and 53 people in the capital caught the virus on May 10, the day Boris Johnson announced a slight relaxation of some lockdown rules.

At the peak of the capital’s crisis – calculated to be the same day lockdown was announced – 213,000 are thought to have caught the infection.

Meanwhile, the team’s modelling shows only one death occurs in every 160 cases, suggesting at the current rate, London’s daily death toll will drop to a consistent level of zero in three weeks.

At the start of the outbreak London was the worst affected part of the UK but the latest numbers suggest it is now ahead of every other area in terms of recovery and it could see all new cases eliminated by June. In contrast, the North East of England is recording 4,000 daily infections and has an R rate of 0.8, twice that of the capital.

One epidemiologist argued it is ‘extremely unlikely’ the number of new cases in London is as low as 24.

The new data – provided to a sub-committee of the Government’s SAGE panel of experts – sparked hopes that the easing of strict measures could be accelerated.