Man, 27, shot in the head in north London killed by mistake say police

Man, 27, shot in the head on his own doorstep in north London was killed in a case of mistaken identity say police

A 27-year-old man shot in the head on his own doorstep in north London on Monday night was killed in a case of mistaken identity, police have revealed.

Police were called at 8.22pm on May 18 to reports of shots fired in Wiltshire Gardens, Haringey.

Officers attended along with London Ambulance Service and found the victim with gunshot injuries. He was pronounced dead at the scene.

Now, police detectives have revealed the man was shot dead by mistake with his killers thinking he was someone else. 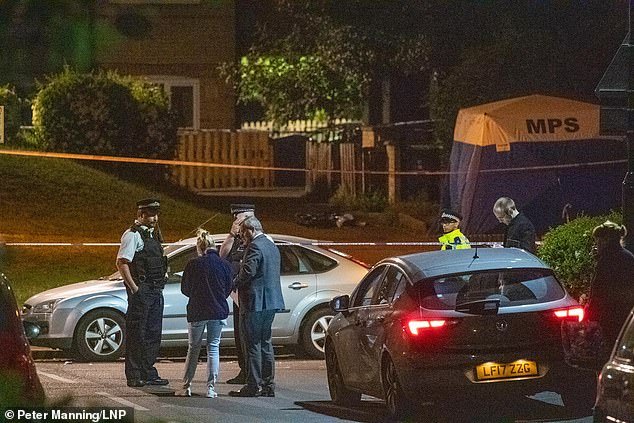 Police were called at 8.22pm on May 18 to reports of shots fired in Wiltshire Gardens, Haringey (pictured: Officers talking in front of a police forensic tent)

Scotland Yard’s Detective Chief Inspector Andy Partridge said: ‘This was a cowardly attack on an innocent man who was shot dead on his own doorstep.

‘Although at an early stage of the investigation, I strongly suspect that he was not the intended target of this attack; making this case all the more tragic.’

Armed officers went to the scene after police were called to reports that shots had been fired just after 8.20pm on Monday.

No arrests have been made and detectives are appealing for information.

DCI Partridge said: ‘It would have still been light when the shooting took place and I’m hoping there are people out there who saw something who we’ve not yet spoken to.

‘Did you see a moped arrive or leaving the scene? Did you see it travelling along Finsbury Park Avenue or any of the streets nearby? Are you a driver with dashcam footage of the moped leading up to or after the incident?

‘Any information passed to us will be treated in the strictest of confidence.’

The victim’s family has been told and a post-mortem examination is scheduled to take place on Thursday. 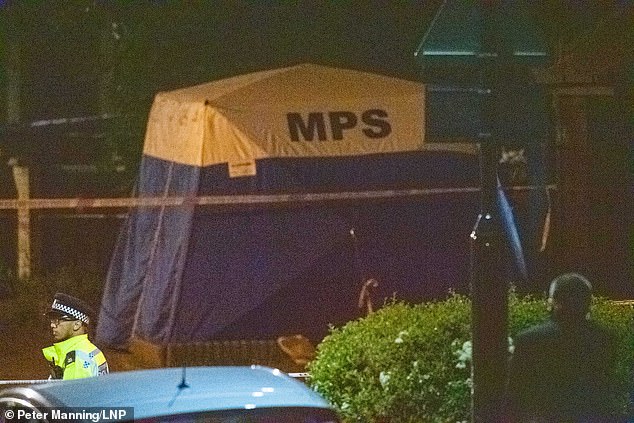 A police forensic tent sits on Wiltshire Gardens. A post-mortem examination and formal identification will be arranged in due course

Cordons remained in place at the scene on Tuesday afternoon, while a Section 60 order, which gives officers extra stop and search powers, has been extended.

Detective Chief Superintendent Treena Fleming, Commander of the Met’s North Area Command Unit, said: ‘This is a harrowing incident and our immediate thoughts are with the victim’s family and friends at this devastating time.

‘An experienced and dedicated team of detectives are doing all they can to identify those responsible and bring them to justice.

‘I know that members of the community will naturally be very concerned and shocked.

‘Whilst incidents of this nature are rare, that doesn’t detract from the impact this will have had; and I want to reassure local residents that we will continue to work closely with community leaders, key stakeholders and the local authority to update them and provide reassurance.’