A man has been charged with attempted murder following a shooting in Melbourne’s west over the weekend.

Paramedics were called to Federation Drive, Melton, just after 3pm on Saturday where they found a 36-year-old man with multiple gunshot wounds to his upper body. 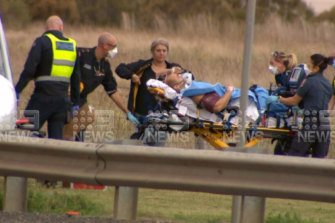 A man has been hospitalised after a’targeted’ shooting in Melbourne.Credit:Nine News

The victim remains in hospital in a stable condition.

On Monday night, a 38-year-old man handed himself to police over the shooting and has been charged with attempted murder, reckless conduct endangering life, intentionally causing serious injury, and the prohibited personal use of a firearm.

Investigators remanded the man, of Kurunjang, in custody to appear at Melbourne Magistrates’ Court on Tuesday.