One man is dead and another is injured after a car being pursued by police crashed into a power pole in Sydney's south-west overnight.

Police say highway patrol officers from Campbelltown tried to stop the driver of a Mitsubishi Lancer about 11.20pm on Thursday. 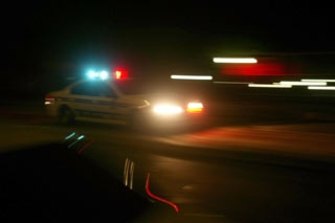 A male passenger was thrown from the car and died at the scene, police said.Credit:Quentin Jones

The officers began a pursuit when the driver did not stop. The car struck the pole on Eastwood Road, Leppington, a short time later.

A male passenger was thrown from the car and died at the scene, police said.

The driver is under police guard in hospital, where he is being treated for arm injuries.

Police are appealing for any witnesses to come forward.

A critical incident team from Fairfield police will investigate the circumstances surrounding the incident.

This investigation will be subject to an independent review and the matter will be referred to the coroner.