Manhattan penthouse where John Lennon lived is listed for $5.5 million

A Day in the Life! Manhattan penthouse where John Lennon claimed he saw a UFO and lived for 18 months during his ‘Lost Weekend’ with assistant May Pang goes on sale for $5.5 million

A die-hard Beatles fan could soon live like John Lennon because the New York City apartment where he enjoyed a ‘Lost Weekend’ with his assistant May Pang has gone on the market for $5.5million.

The five-bedroom, four-bathroom triplex spanning 4,000 sq ft is in Manhattan’s Sutton Place neighborhood and offers stunning views of the East River. It’s also where the ‘Day in the Life’ hitmaker escaped during a brief split from Yoko Ono.

The next lucky owner of apartment G at 434 E 52nd Street will have the rare luxury of private outdoor space – 2,000 sq ft of it thanks to two terraces that wrap around the Southgate co-operative.

Both balconies are accessible from every room on the main floor of the apartment. 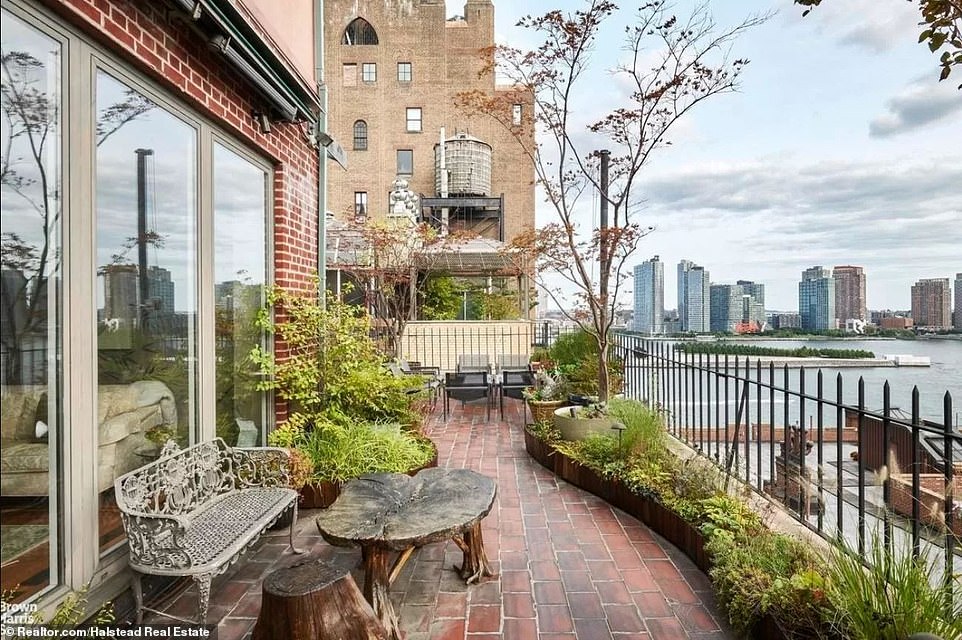 This five-bedroom, four-bathroom home went on sale last week and has glorious outdoor space and views of the East River 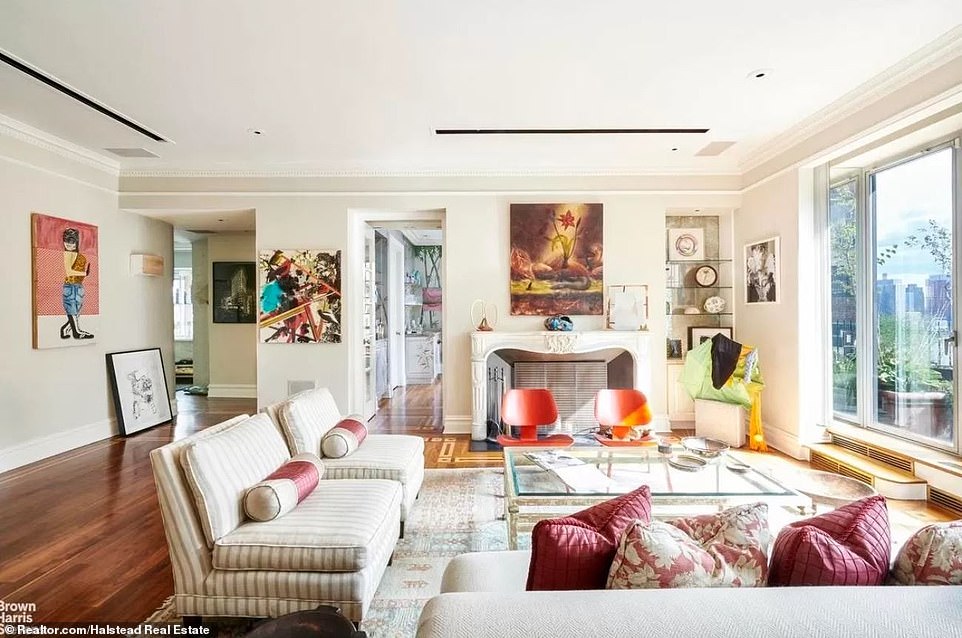 On the entry level, a luminous and elegant living room has high ceilings, woodburning fireplace, and beautiful inlaid hardwood flooring 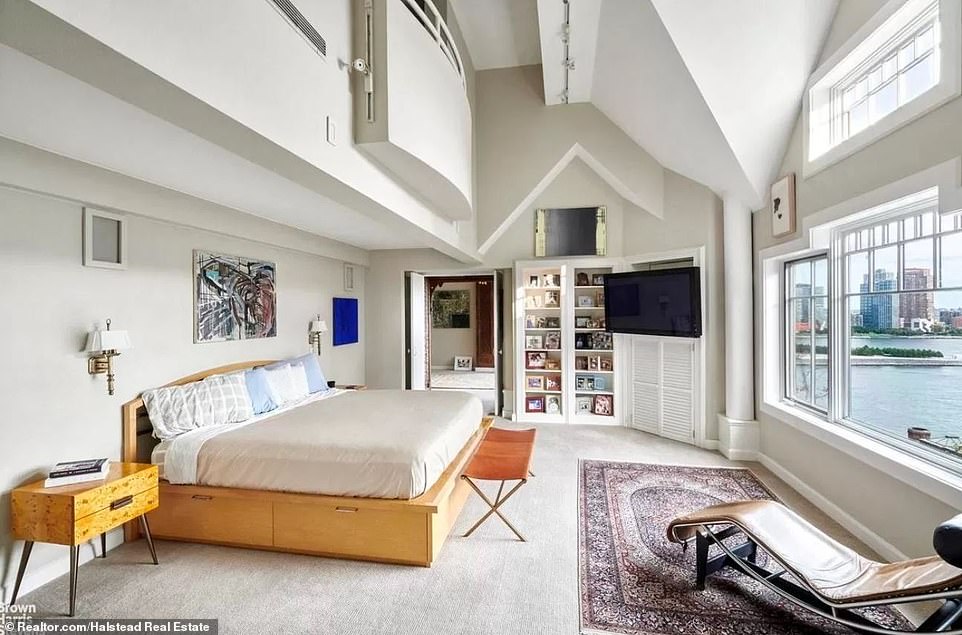 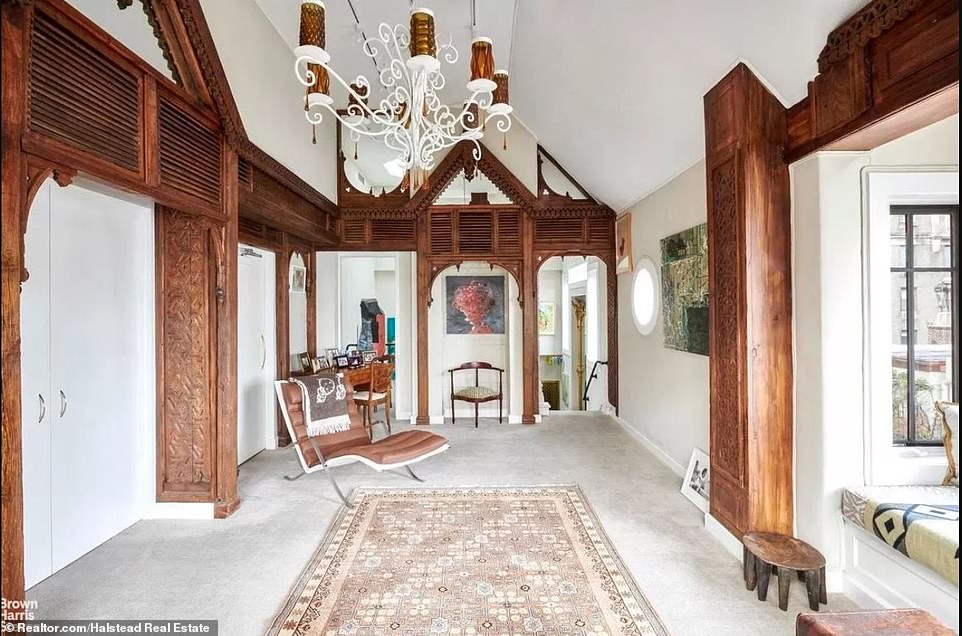 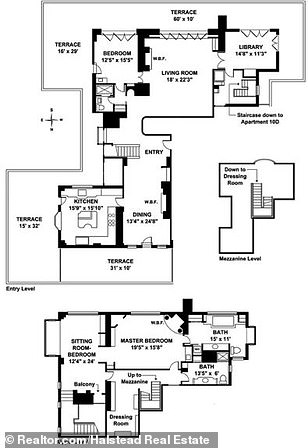 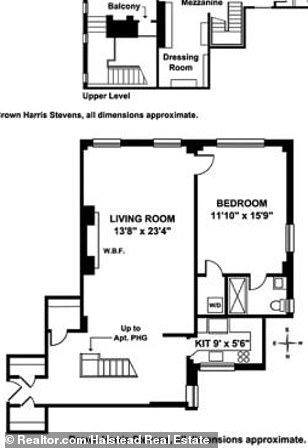 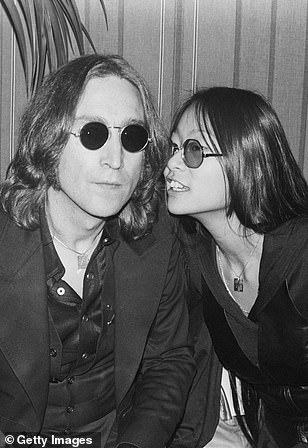 The main floor plan is pictured left. A second apartment is also within the home (center). May Pang and John Lennon (right) lived at the property

Despite dramatically high ceilings, the home still maintains a sense of intimacy due to its layout which allows the place to act as two separate apartments.

The main living room features a wood-burning fireplace and inlaid hardwood flooring which pairs beautifully with picture frame windows that draw attention to the striking skyline buildings and river views.

Other windows face buildings to the south and east, still allowing plenty of light to flood in.

The side of the home that provides a sight-line all the way down to the harbor also features a library/media room.

On the other side of the main floor is a sizable bedroom that’s also set up as a home office, according to Halstead Real Estate. 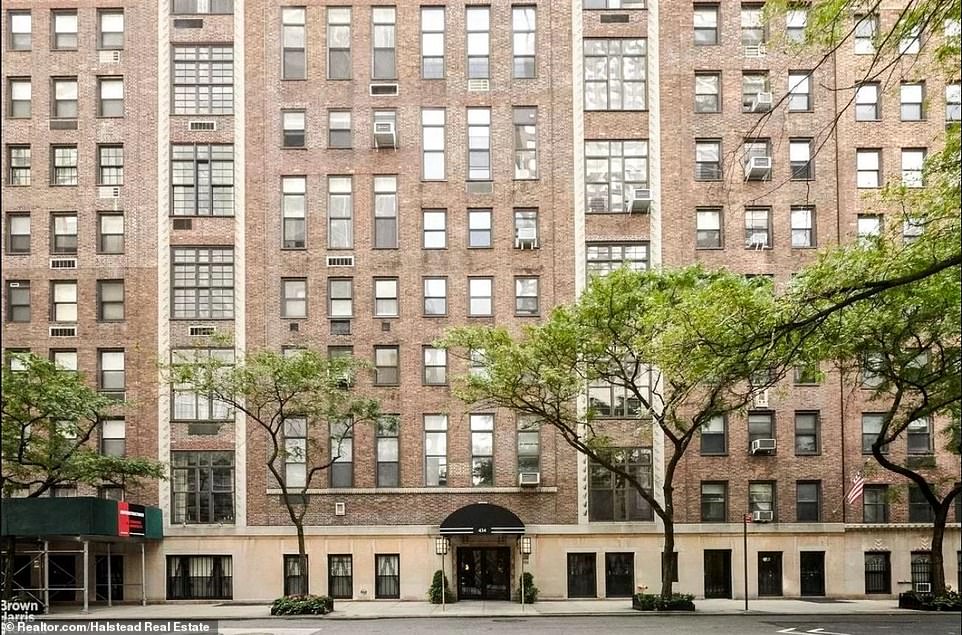 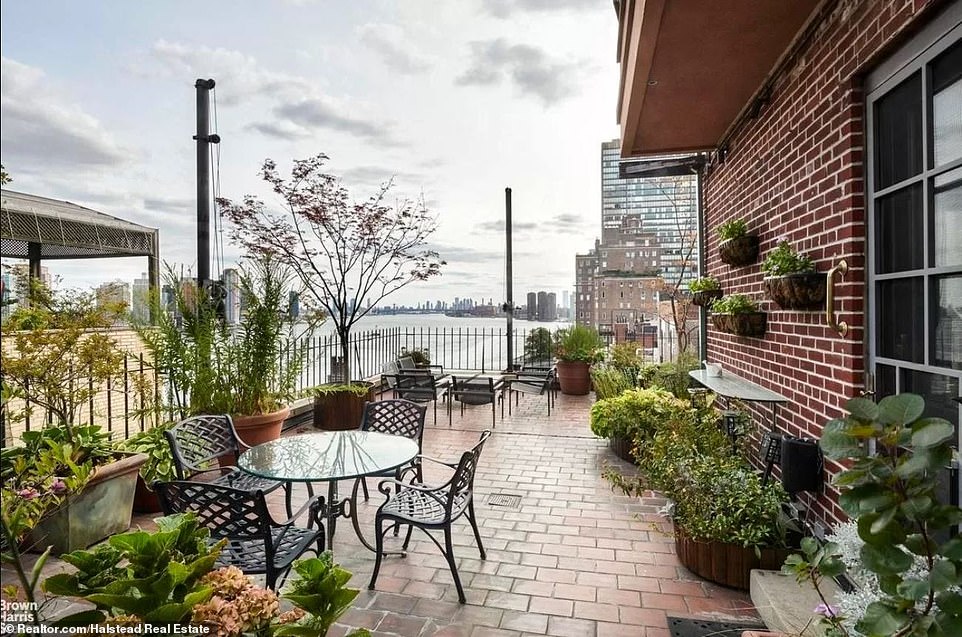 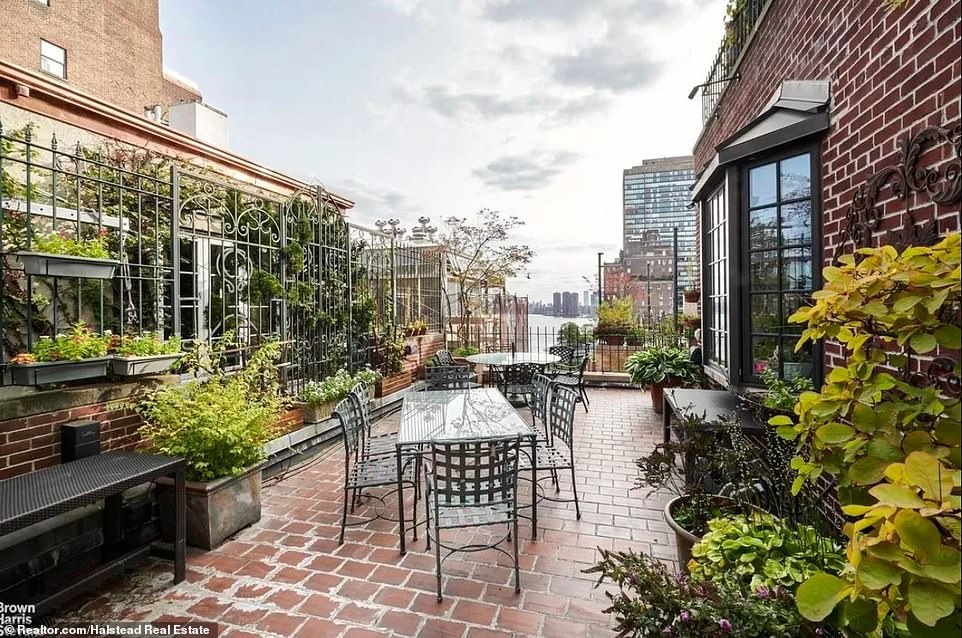 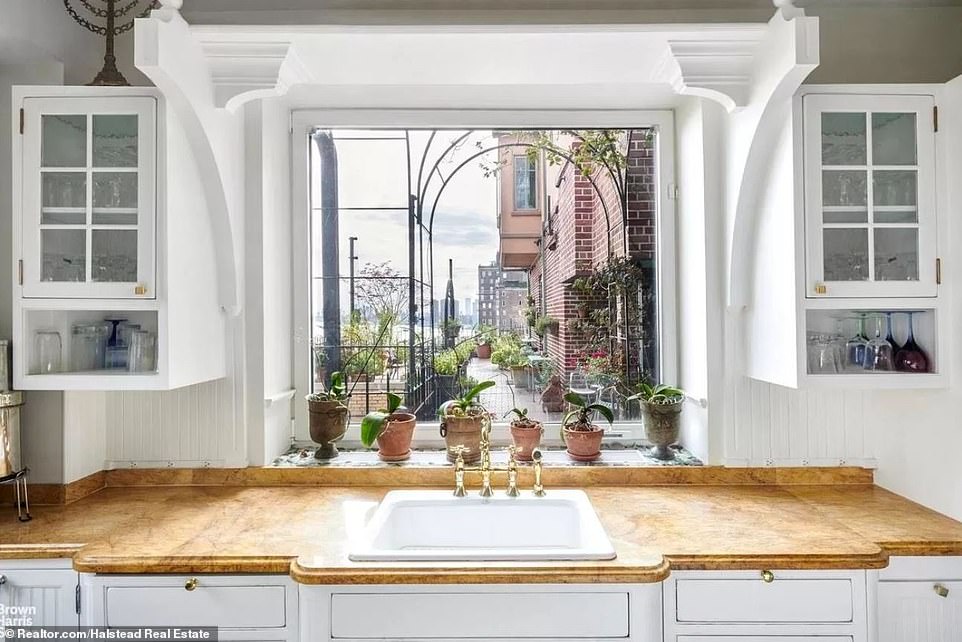 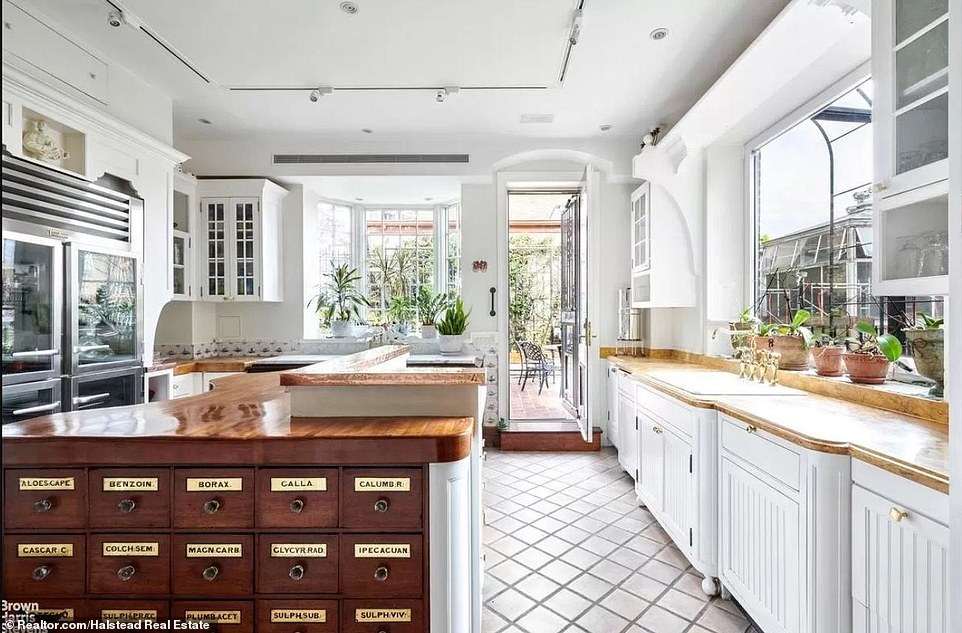 The property brokers boast that the ‘generous kitchen’ provides plenty of counter-top space and storage – including an apothecary chest – making it a chef’s dream.

Avid cooks won’t feel like they’re missing out while guests relax on the terrace as the oversized windows in the ‘French countryside sensibility’ kitchen allow for the feeling of indoor-outdoor living.

In colder weather the dining room is a great option for hosting as it has enough room to seat 20 people and contains a wood-burning fireplace.

The next level up really makes the most of the iconic cityscape views, with a spacious window seat at the top of the wrought iron stairs.

The master bedroom is also on this level and the room with 14-foot ceilings and two en suite bathrooms is likely where Lennon told Andy Warhol’s Interview magazine in 1974 that he saw a UFO.

‘I was lying naked on my bed, when I had this urge,’ late Beatles legend Lennon said. ‘So I went to the window, just dreaming around in my usual poetic frame of mind… There, as I turned my head, hovering over the next building, no more than 100 feet away was this thing with ordinary electric light bulbs flashing on and off round the bottom, one non-blinking red light on top.’ 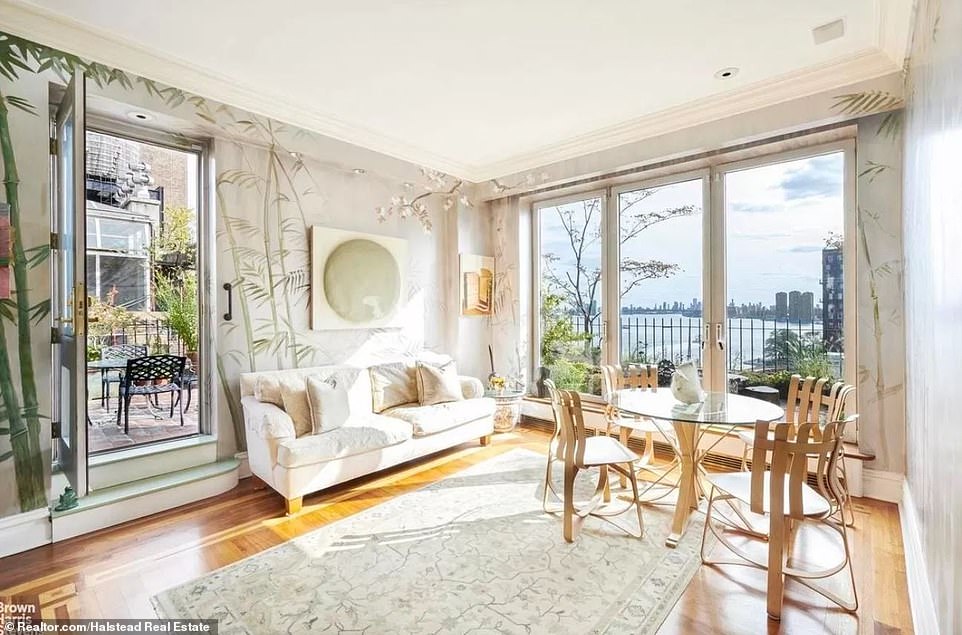 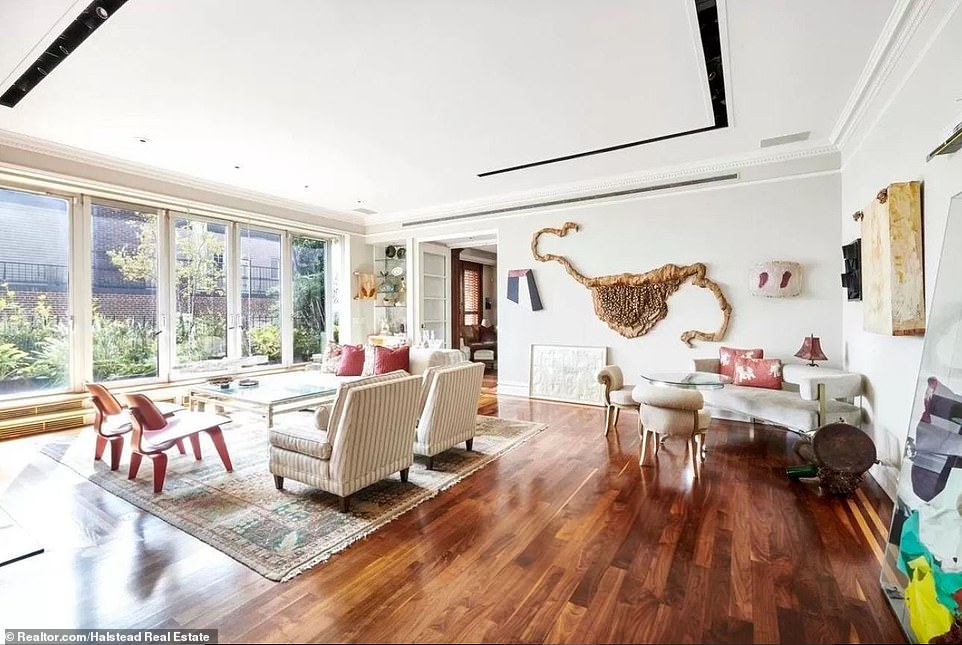 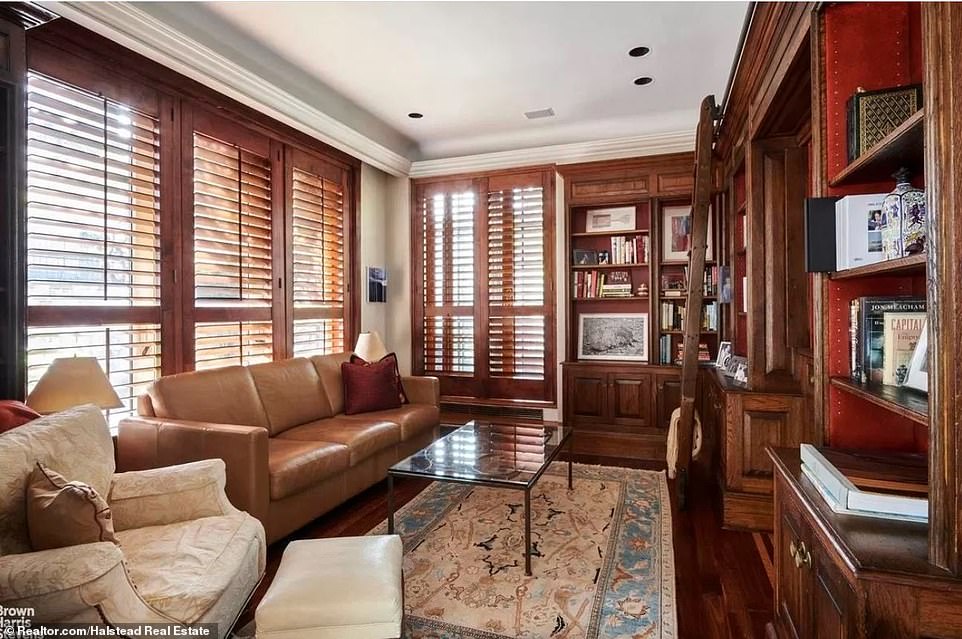 A library/media room sits on one side of the main living space. The penthouse still feels intimate despite its square footage 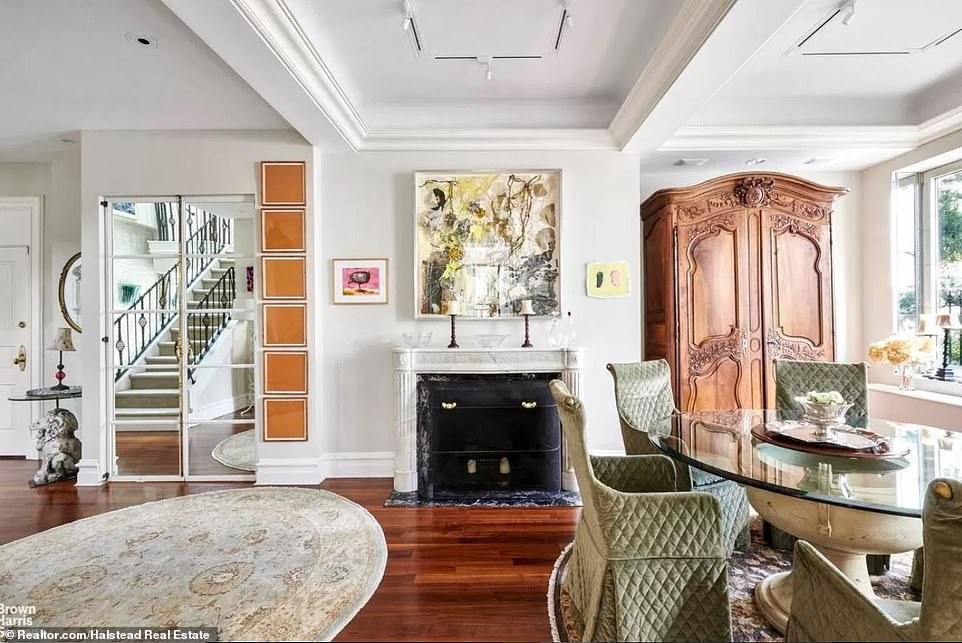 The lower level of this expansive home is a fully self-contained one-bedroom apartment with a large living room (featuring a fireplace). A formal dining room that comfortably seats 20 awaits with its own fireplace 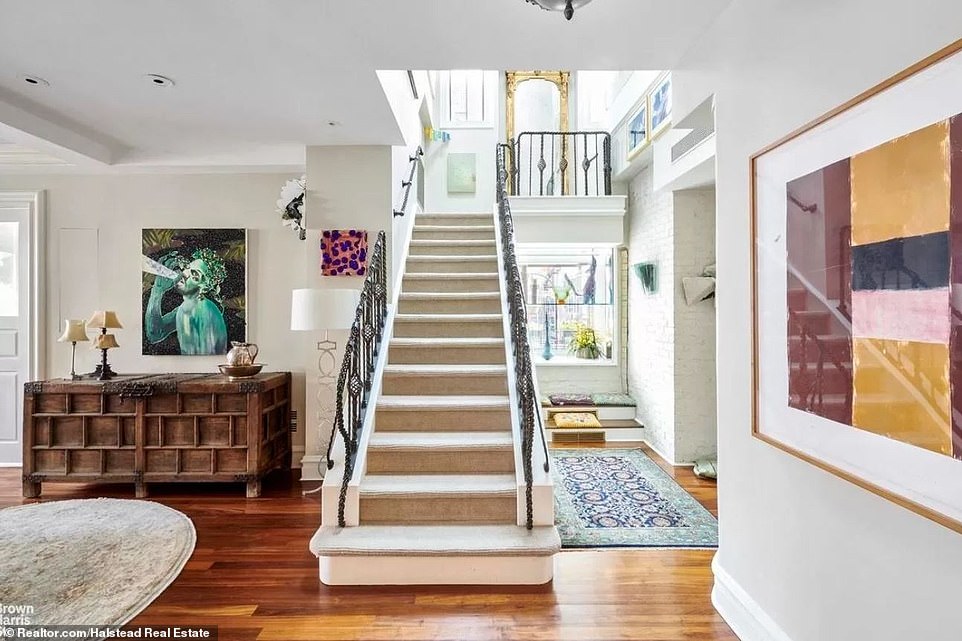 For the images that accompanied the article he appeared on the rooftop wearing a New York City t-shirt he’d bought for $5.

The 1929 home developed by Bing and Bing and designed by architect Emery Roth is perhaps best suited to someone with a more refined fashion collection. The two-story closet features a rotating electronic system to display clothing and has its own washer-dryer.

An additional living room with fireplace, bedroom, bathroom and kitchen is available on the lower level, making the home the ideal spot for a lodger.

The next owner can ensure ample privacy as the building has a doorman, and the additional space has a private entrance as well as internal access.

Or creative types can use it for a serene space to work on projects. Lennon was working on his fifth solo album, Walls and Bridges, at the time of his fling with Pang. He was assassinated six years later. 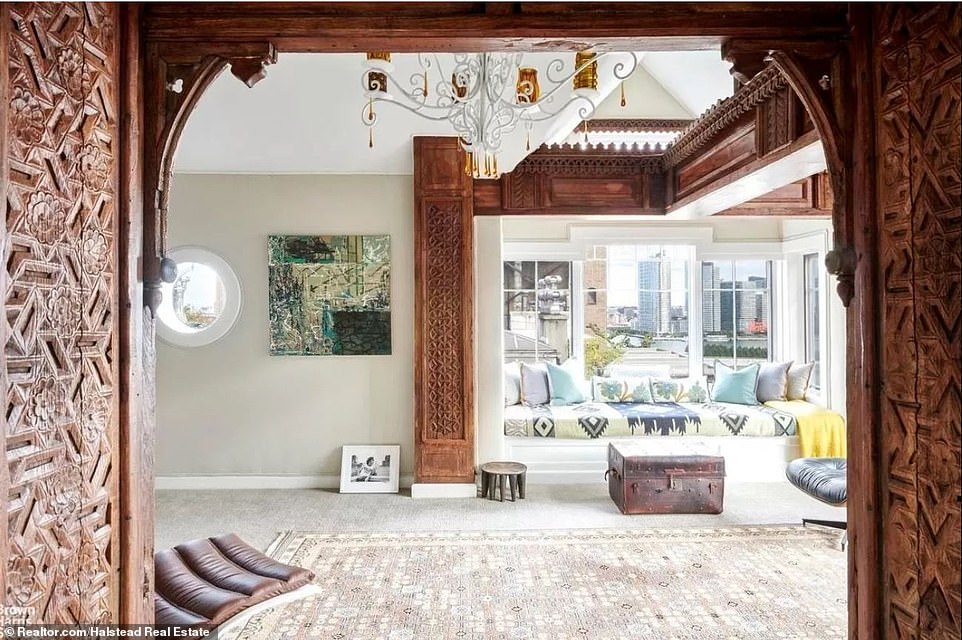 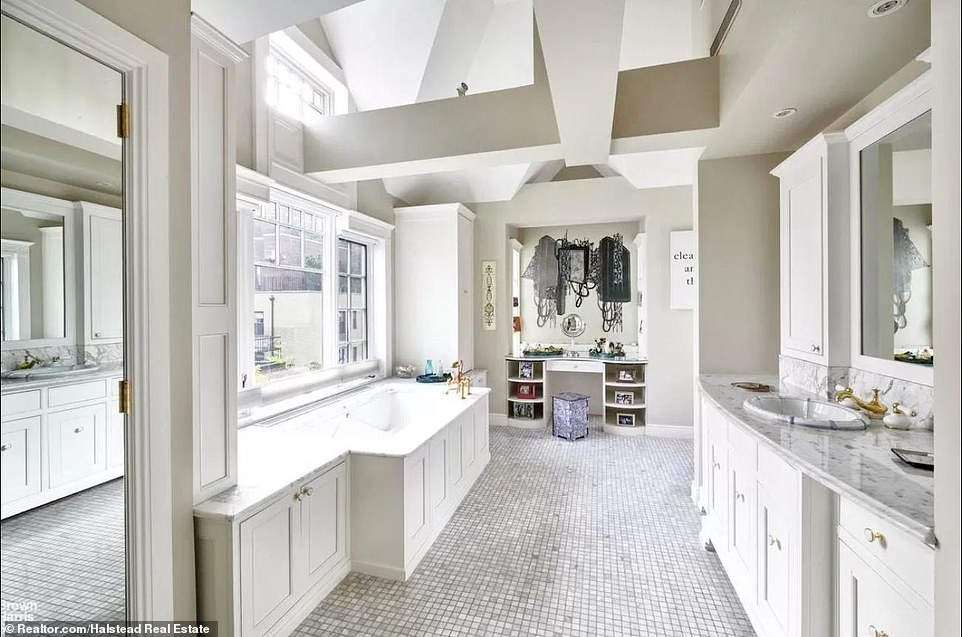 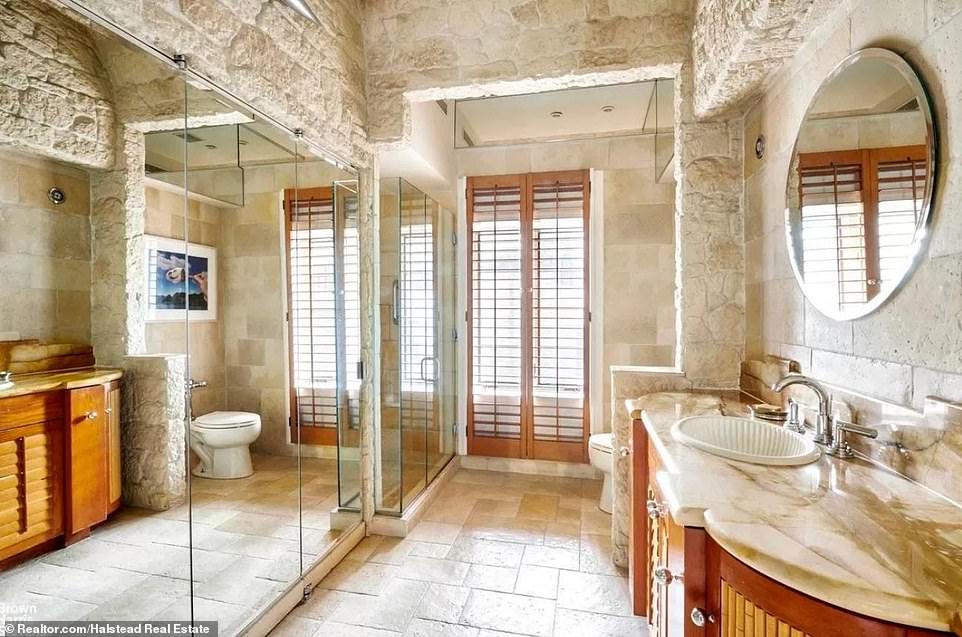