This is the moment a maskless Farmfoods supermarket customer rows with the police are they issue her with a fine – despite her claims that she is exempt on health grounds.

Footage shows two officers from West Midlands Police handing the female customer a fixed penalty notice, saying that she has ‘broken a guideline’.

A policewoman explains that she can take the fine to court and show her ‘burden of proof’ while the shopper claims that she is exempt from wearing a face covering. 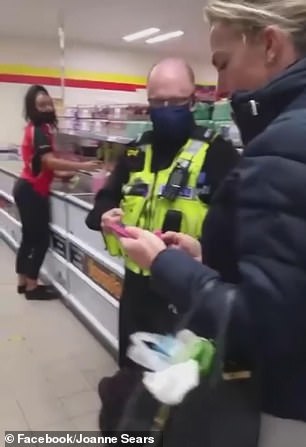 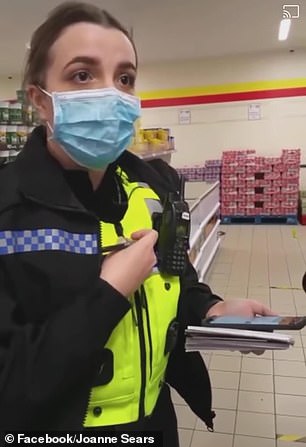 Footage shows two officers from West Midlands Police handing the female customer a fixed penalty notice, explaining that she can take it to court and show her ‘burden of proof’

The man filming asks ‘what for?’ before the policeman urges him to listen to the other officer, who says: ‘If we give you a fixed penalty notice, what it then does, you take it to court and you show your burden of proof then to the court.’

The female customer says ‘I don’t need to’, before the policeman responds: ‘Yes you do.’

The policewoman says that, as police officers, they ‘do not have to ask for proof of her exemption’ but that they can ask what it is ‘in a conversation’.

The customer then interjects: ‘Hold on, hold on. I’ve just shown you my card, I’ve explained my situation.’ 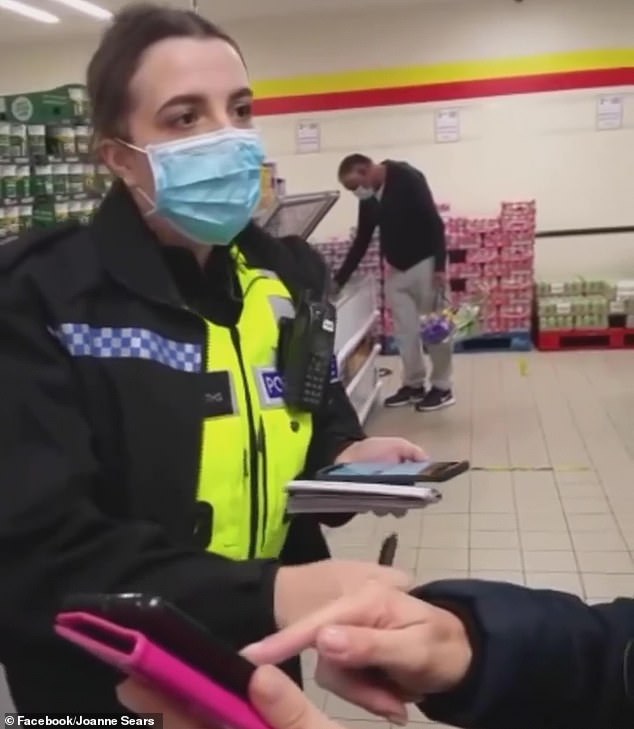 The female customer claims she is exempt, and says that she can show a text to her son’s girlfriend asking whether her exemption card has arrived yet 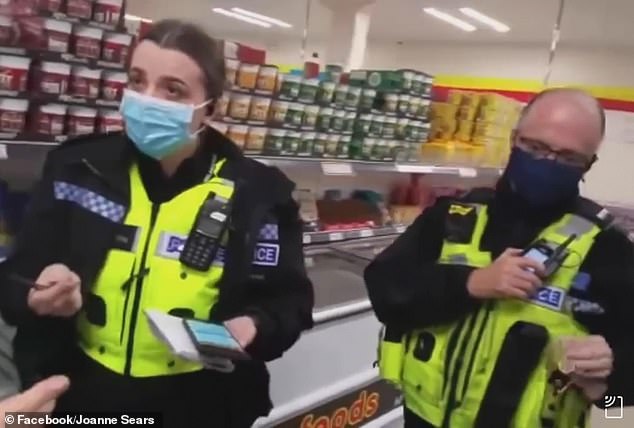 After being asked whether she has broken the law, one of the officers says she has ‘broken a guideline’. The clip was shared online and said to have been filmed in Farmfoods

Face coverings: Who is exempt?

Children under the age of 11 and people who cannot wear a face covering due to a mental or physical illness are exempt from wearing masks.

Carrying an exemption card or badge is a ‘personal choice’ and ‘not required by law’, according to the government.

It states that if you have an age, health or disability reason for not wearing a mask, then you ‘do not routinely need to show any written evidence of this’ and ‘do not need to show an exemption card’.

The policeman replies: ‘You showed me a card that you printed on the internet. That’s not valid’, to which the customer responds: ‘So? I’ve just shown you antidepressants.’

He responds: ‘Because you haven’t got a certificate or a doctor’s note, the onus is on yourself.’

The shopper says: ‘I can prove to you here that my son’s girlfriend has ordered me a card, which I just said to you, I only texted the other day saying “has my card come yet?”

‘I can prove to you here that she’s put “yes, it does take a few weeks, I think my mum’s took a few weeks as well”.’

The camera operator questions whether she has broken the law, to which the policeman says she has ‘broken a guideline’.

At the end of the video, the customer can be heard saying: ‘I’ve done everything I can, really. At least I’ve done something to try.’

The footage was posted to Facebook, captioned: ‘So, this is how they are going to play it now!!

‘Using fear to issue fines to non-mask wearers and then saying it’s down to you to dispute it & show an exemption if you have one!

‘Remember people, you don’t have to show any exemption OR give any of your details. You have not broken a law.’

The clip was also shared on Twitter and said to have been filmed in Farmfoods yesterday.