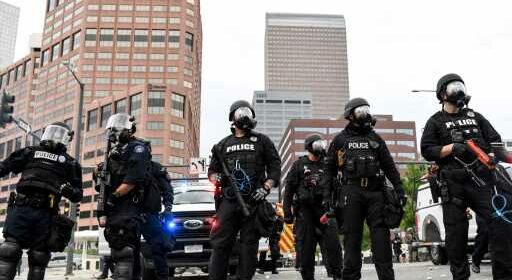 Those are a small sample of the 112 recommendations released Friday by the Task Force to Reimagine Policing and Public Safety, a coalition of dozens of residents representing more than 40 community organizations convened in June in the wake of last year’s police brutality protests.

The group released its 53-page report four days before the anniversary of the murder of George Floyd by a Minneapolis police officer, which sparked massive demonstrations in Denver and across the country demanding broad change to American policing.

“Simply discussing and debating the need for change is no longer an option, more so our only option,” the report states. “Stop talking and start doing. For this reason, we are informing you that it is time to make these changes.”

The volunteer group’s goal was not to delve into the nitty-gritty of when and how police can use force, said Robert Davis, the task force’s project coordinator.

The recommendations address a wide variety of problems in the city, such as displacement caused by gentrification, homelessness, drug use and mental health needs. They include law and policy changes, such as decriminalizing offenses like drug use and public intoxication, and ending the use of no-knock warrants. Other recommendations involve more systemic changes, such as creating unarmed, non-police, community-based response teams to respond to calls for help.

“These recommendations are centered in the community — a broad spectrum of the community,” Davis said. “You are looking at recommendations that were formed by people who are abolitionists at one end of the spectrum, and those who are saying ‘let’s keep the police as they are’ at the other.”

The Denver Police Department and the Department of Public Safety participated in the group’s work until January, when the agencies’ representatives withdrew from the process because Public Safety Director Murphy Robinson felt the law enforcement officials were not allowed to actively take part.

Davis said he had a brief and cordial conversation with Robinson on Thursday to tell him the group had finalized its recommendations.

Kelli Christensen, spokeswoman for the Department of Public Safety, said the department received a copy of the report Friday and will review it.

“We’ll have a response probably sometime next week,” she said.

The group recommended substantial changes to how police are disciplined, like replacing the Civil Service Commission with a Civilian Review Commission that will be part of the disciplinary process. It also recommended that internal affairs investigations of police be conducted by the Public Integrity Division — a unit overseen by the director of public safety that investigates sheriff deputies’ conduct — instead of the internal affairs bureau inside the police department.

“Meaningful community oversight is not an attack on police; it is a fundamental part of establishing trust and building credibility between law enforcement and the communities they serve,” the report states.

Davis said he has been disappointed with a lack of city-initiated change since the protests last year and a lack of accountability for the flaws in how the Denver Police Department handled the protests, as documented in a report from the Office of the Independent Monitor. Two officers have been disciplined for excessive force.

“I think the task force’s work shows that our paid people can do a lot more,” Davis said. “If volunteers can come together and do this heavy lift, we can expect a lot more for people who are getting six figures paychecks.”

The task force will now work to implement the recommendations, Davis said.

The city is not bound to implement any changes, though the mayor and Robinson have both previously promised to consider the group’s recommendations.

“This is the very beginning,” Davis said. “This is the first thawing of the ice age. We have so much more work to do.”