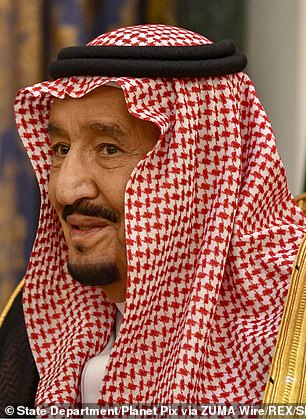 Theresa May and Emmanuel Macron tonight phoned King Salman of Saudi Arabia to urge his secretive regime to disclose information about Jamal Khashoggi’s murder and threaten sanctions against those involved.

Mrs May told the Saudi head of state that his country’s claim the journalist died in a fistfight ‘lacked credibility’, before urging him to cooperate with the Turkish investigation into what happened.

Mr Macron also demanded the Saudis be open with investigators, and warned that anyone found responsible for the murder would face sanctions from France and its allies.

Downing Street provided a summary of the call with King Salman, who is aged 82 and plays a less visible role on the world stage than his powerful son, Crown Prince Mohammed Bin Salman.

Describing the call, a Downing Street spokesman said Mrs May had urged King Salman to ‘reiterate the UK’s grave concerns’ about the murder.

‘The Prime Minister said the current explanation lacks credibility so there remains an urgent need to establish exactly what happened,’ the spokesman said.

‘She strongly urged Saudi Arabia to cooperate with the Turkish investigation and to be transparent about the results. It is important that the full facts are established.’

‘The Prime Minister also reiterated that all individuals bearing responsibility for the killing of Mr Khashoggi must be properly held to account.

‘She said the Home Secretary is taking action against all suspects in the murder of Mr Khashoggi to prevent them entering the UK. If these individuals have visas, they are being revoked.’ 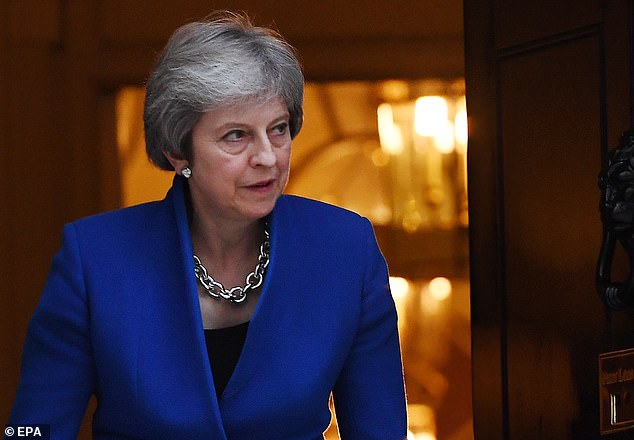 The French reaction has been relatively guarded to date, as Paris tried to retain its influence with Riyadh and protect commercial relations spanning energy, finance and arms.

But President Emmanuel Macron told King Salman that France, in coordination with partners, could take action against those held responsible for the murder, the presidency said in a statement.

Macron expressed profound outrage during a phone conversation with Salman, it said, adding that the president had asked the king that the circumstances around Khashoggi’s death be fully disclosed.

‘As long as the facts have not been clearly established, and corroborated by our information services, we will not take any decision,’ government spokesman Benjamin Griveaux said earlier on Wednesday.

‘On the other hand, once light has been shed on the matter and has been corroborated by our services, based on the hypothesis that Saudi Arabia’s responsibility has been proved, then we would draw the necessary conclusions and impose appropriate sanctions,’ he said.

The calls came at the end of a day that saw increasing pressure heaped on the Saudis, with an adviser to Turkish President Recept Tayyip Erdogan accusing Crown Prince Bin Salman of having ‘blood on his hands’. 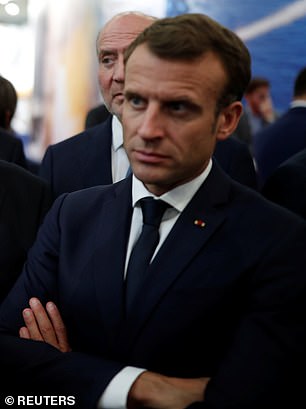 Mr Macron (pictured yesterday) also demanded the Saudis be open with investigators, and warned that anyone found responsible for the murder would face sanctions from France and its allies

In a newspaper column Ilnur Cevik described the Khashoggi case as a ‘disgrace that reaches all the way to Crown Prince (Mohammed bin) Salman’.

They are the bluntest comments yet from someone linked to Erdogan about Riyadh’s de facto ruler in connection with the journalist’s death on October 2 in Istanbul.

The Crown Prince addressed the murder in public for the first time today, telling the Future Investment Initiative in Riyadh that it was a ‘heinous crime that cannot be justified’.

‘The crime was really painful to all Saudis. I believe it is painful for every human in the world,’ he added.

He was keen to keep the focus onto economic issues, telling the conference that his country would be ‘totally different’ in five years, vowing to pursue sweeping reforms to diversify its economy away from oil.

‘I believe the new Europe is the Middle East,’ he said. ‘The Kingdom of Saudi Arabia in five years will be completely different.’

Prince Mohammed has been the driving force behind Riyadh’s Vision 2030 plan for economic and social reforms, including ambitious projects such as futuristic mega-cities, as Riyadh prepares for a post-oil era.

‘If we succeed in the coming five years, other countries will join us,’ he said.

International business leaders have pulled out from attending the summit over the killing.

Turkish President Recep Tayyip Erdogan reportedly spoke by phone with Prince Mohammed just before he arrived with other Arab leaders at the summit.

‘We are determined not to allow the murder to be covered up and for those responsible – from the person who gave the order to those who executed it – not to escape justice,’ he said in the capital, Ankara. 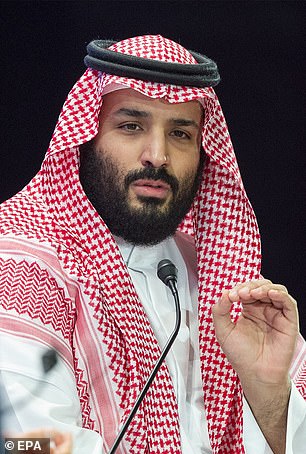 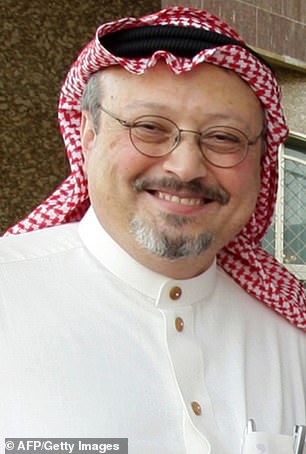 Crown Prince Mohammed Bin Salman (left, at today’s finance conference) has been accused of having ‘blood on his hands’ over the murder of Jamal Khashoggi (right, in 2010)

Turkish officials say the 15 men comprised a Saudi hit squad that included a member of Prince Mohammed’s entourage on overseas trips. Saudi Arabia has suggested, without offering evidence, that the team went rogue.

With the crown prince’s standing marred, his ability to draw needed investment to the kingdom could be affected.

Economists say Saudi Arabia will need trillions of dollars in investments to create millions of new jobs for young Saudis entering the workforce in coming years. The investment forum is aimed at attracting investors to help underwrite that effort.

The event’s first day saw several speakers acknowledge the killing of the Saudi writer whose columns criticized the crown prince’s crackdown on dissent. Dozens of Saudi activists, writers, clerics and even women who were behind calls for the right to drive have been detained.