McDonald's (MCD) is taking a page out of its fans' playbooks, adding four 'hacked' menu items for a limited time.

Beginning on January 31st, customers can order the unique pairings that were developed by fans, but they will have to assemble these colossal creations themselves.

Prices will vary by region and location according to the company, but will include all the items needed to create the hack. In addition, the company is coupling the campaign with digital deals.

From Monday to February 27th, the Surf + Turf, exclusive to the McDonald's app and McDelivery, will be available with a free medium world famous fries and soft drink. Meanwhile, from Monday to February 2nd, guests ordering on Uber Eats (UBER) during breakfast orders will receive a free Hash Brown McMuffin after spending $15 dollars. Throughout the rest of the day, guests who spend $20 dollars will be eligible for a free Crunchy Double. 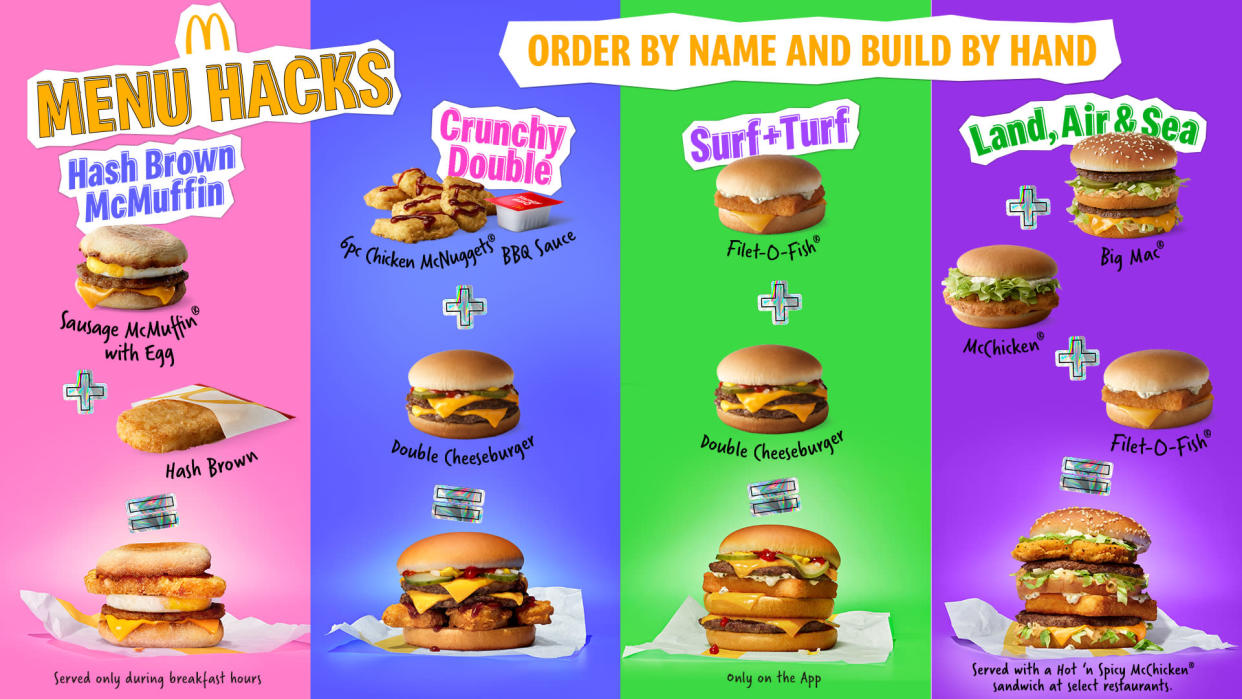 These four menu hacks were chosen by the company, based off favorites seen on social media.

Self-identified ‘menu hack masters’ Sarah Sandlin (@sarahmargaretsandlin), Greg Simms (@grubwithgreg), Julian Broadway (@julianbroadway) and PJ Mattingly (@heavyhands94) on TikTok — who have a combined following of more than 800,000 — are helping the mega restaurant chain launch the nationwide campaign, with a commercial set to air on January 31st.

"We’re always looking for ways to celebrate our fans’ creativity and passion for our food, and are excited to spotlight them in one of our first marketing campaigns of the year," McDonald's told Yahoo Finance in an email.

When asked how the company is helping franchises prepare for the menu hacks, the company said franchisees "have had a front row seat to our customers’ unique creations for years." Partnering with them for the new offerings were key, and the company seems to be betting big on the limited-time offering.

"We’re bringing restaurant crew in on the fun too – from training on the ins and outs of the four hacks to sharing some special swag for them to sport during the promotion window," the company told Yahoo Finance.

Meanwhile McDonald's continues to see success with its limited-time celebrity meals, including the Mariah Carey inspired Menu, Saweetie Meal, and "Famous Orders" from BTS and Travis Scott, among others.

“From Hip-Hop icons to Christmas queens, everyone has a unique go-to McDonald's order, including our everyday customers. This campaign shows that it has never been ‘our menu’ — the menu belongs to our fans,” McDonald's said in the release.

Shares of the Golden Arches are up more than 16 percent compared to a year ago. The company is poised to release its fourth quarter and fiscal year 2021 earnings on Thursday before market open.

Brooke DiPalma is a producer and reporter for Yahoo Finance. Follow her on Twitter at @BrookeDiPalma or email her at [email protected]