Melbourne Uni did nothing after report found professor was a harasser

An internationally renowned academic at the University of Melbourne has retained his roles as Laureate Professor and Rowden-White chair of global health despite an independent workplace investigation finding two years ago that he had sexually harassed a young female colleague.

Workplace investigator Rose Bryant-Smith found in 2019 “on the balance of probabilities” that Professor Alan Lopez had groped Ashley Frederes in a lift, attempted to kiss her, blocked her exit from his hotel room and told her she looked “sexy”, “irresistible” and a “distraction for all the men”. 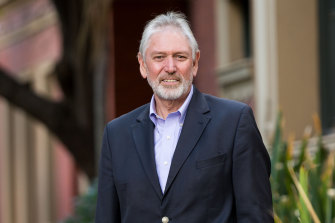 “In the investigator’s view, Professor Lopez has engaged in sexual harassment of Ms Frederes,” Ms Bryant-Smith concluded in a confidential report seen by The Age and The Sydney Morning Herald. The finding means that, in Ms Bryant-Smith’s view, the events were more likely than not to have happened.

Professor Lopez denied all the allegations, and continues to do so. But the report found Professor Lopez’s conduct in 2015 to be in breach of the university’s appropriate workplace behaviour policy.

The University of Melbourne declined to discuss whether it had taken any action against Professor Lopez, saying in a statement that it did not comment on individual cases. Vice Chancellor Duncan Maskell said sexual harassment “has no place at our university or in our society”.

Professor Lopez has a global reputation as an epidemiologist and health data expert and has retained his high-profile public positions at the university following the investigation.

He did not answer a series of questions from The Age and Herald, responding instead through his Sydney lawyers who threatened defamation action saying their client “enjoys a renowned reputation … and is adamant that there is no basis to the explicit statements, imputations and inferences contained in your questions”.

In her 2019 report, Ms Bryant-Smith found Ms Frederes’ testimony “convincing and credible”. She accepted four of Ms Frederes’ seven allegations as proven and concluded a further three allegations had elements that could be substantiated but were not sufficient to classify them as proven. 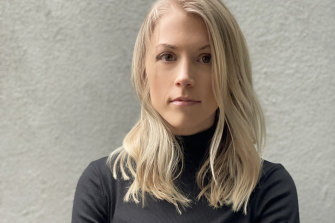 The investigation also found Professor Lopez raised concerns about Ms Frederes’ job performance with her superiors after the alleged incidents in 2015. But Ms Bryant-Smith found it could not be proven that Professor Lopez’s comments about her performance were linked to her rejecting his alleged advances.

Ms Bryant-Smith, a former workplace relations lawyer at Clayton Utz and Allens, formed workplace consultancy Worklogic in 2017. She is a former editorial board member of the Melbourne University Law Review.

Professor Lopez, 69, was awarded a companion of the order of Australia in 2016 for his service to public health. He has more than 75,000 citations to his research and was chief epidemiologist for the World Health Organisation’s tobacco control program during the 1990s.

Ms Frederes told The Age and Herald she had been motivated to speak publicly because of the apparent lack of action by the university despite the adverse findings.

“I realised that people in positions of authority aim to indoctrinate us in the lies that we are too weak to stand up,” she said. “There is power in revealing the truth and I hope others will feel empowered to stand up for themselves and say ‘enough’.”

University of Melbourne student union president Jack Buksh said the university had yet to deliver on a promise to introduce a stand-alone policy to protect students and staff from sexual harassment and assault and “hasn’t had that leadership that is required to deal with those issues”.

“It’s been more about the cover-up,” Mr Buksh said.

National Tertiary Education Union president Alison Barnes said the union viewed sexual harassment as not only a workplace health and safety issue, but one of gender inequality.

“Where complaints are substantiated, the University’s response must be fair and proportional, enacted without delay, and with the well-being and wishes of the complainant first and foremost,” she said.

“You are going to be a distraction”

In October 2015, Ms Frederes and Professor Lopez flew to Shanghai to meet senior Chinese health officials as part of an international “data for health” project involving the University of Melbourne, the World Health Organisation and John Hopkins University.

Professor Lopez was one of the leaders of the project, which was designed to improve the cause of death reporting in low to middle income cities and was funded in part by the Australian Government and Bloomberg Philanthropies. The US-based Ms Frederes, who was then 27, was a program officer for another project partner, the US-based health organisation, Vital Strategies.

“He was physically blocking me from leaving and that’s when he went in to hug me, and I just went to hug back to make it quick and leave,” Ms Frederes alleged in written and verbal accounts. “But that’s when he didn’t let go, and when he started moving his hands over my body and putting his face down closer, leaning in like he was going to kiss me, I froze, because I was very afraid and uncomfortable.” 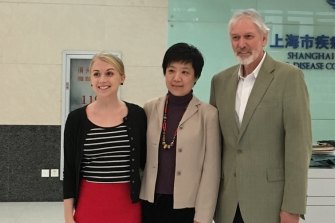 Ms Frederes, another colleague, and Professor Lopez on the Shanghai trip.

She said she pushed Professor Lopez away and left. She did not raise the incident with Professor Lopez the next day, and nor did she report anything to her employer or the University of Melbourne because she feared it might jeopardise her involvement in the project, she told the investigator.

Professor Lopez told the investigation he denied any physical contact with Ms Frederes, save for perhaps “European-style” cheek kissing. He was also adamant that he had never had her in his hotel room.

The next morning Ms Frederes arrived at breakfast dressed in black business dress, black blazer and with her hair and make up done in preparation for a meeting. According to her account, Professor Lopez came to breakfast where he said she looked “stunning, sexy, and beautiful” and “would be a distraction for all the men”.

Professor Lopez denied the account, saying: “Those who know me know that I would never tell, nor have I ever told, a female colleague what I am alleged to have told Ms Frederes. That would simply be unprofessional, disrespectful and dismissive.”

‘His breath on my neck’

A few days later, Professor Lopez was on the verge of returning to Melbourne and he and Ms Frederes had one drink in the lobby to reflect on the past few days. As she left, Professor Lopez followed her into the lift.

“He was standing in the corner of the elevator, so his back to the corner, and I was sort of standing next to him, but then I turned to say, ‘Goodnight,’ because we were approaching my floor, and so that’s when he went in to hug me again, and … this time mostly groped my butt and my waist, sort of moving his hands around my hips and my butt and touching my waist,” she alleged to Ms Bryant-Smith.

“He’s over six feet tall and I’m about five-foot-three, so he would just bend his head down and have his sort of mouth very close to my ear and my neck, like I remember feeling his breath on my neck.”

Ms Frederes said she froze, then pulled away and ran to her room. She contacted a co-worker and friend. Then, according to her complaint, she cried in the shower.

Ms Frederes’ friend and colleague confirmed to the investigator that she did receive a call from the young American about the alleged encounter. She remembered Ms Frederes being upset but composed and saying she did not want to pursue legal action because she feared for her career.

Ms Frederes also reported the incident to two other female friends. Another senior female academic working on the project told the investigation how she had detected tension between Ms Frederes and Professor Lopez after the 2015 overseas trips.

Professor Lopez again denied, verbally and in writing, any physical contact with Ms Frederes, except for possibly kissing her on the cheek three times.

Ms Frederes’ also complained about Professor Lopez to her US boss at Vital Strategies, Philip Setel. Dr Setel declined a request to participate with the university’s investigation. Project funder Bloomberg Philanthropies was also made aware about the alleged harassment. Vital Strategies declined to comment on the matter.

Ms Bryant-Smith accepted Ms Frederes’ account and rejected Professor Lopez’s claim that the young woman had invented the harassment allegations to deflect attention from his criticisms of her job performance in 2017 and 2018.

Ms Bryant-Smith also accepted Ms Frederes’ claims that Professor Lopez had talked in a suggestive and inappropriate manner about his past sexual relationships and body parts during their Shanghai trip. But Professor Lopez told the investigator he could not recall any discussion with Ms Frederes about matters involving his personal life and said he had never before heard of the supposed correlation between a large shoe size and large penis.

Ms Frederes produced to the investigation an email sent to her late at night by Professor Lopez during a work trip to Peru a month earlier in which he asked her to join him for a late night drink “just the two of us”. Ms Bryant-Smith said the email was suggestive but Professor Lopez was not to know at that point that it was unwanted by Ms Frederes.

It took almost three years after the alleged incidents for Ms Frederes to lodge a formal complaint with the university in August 2018. She said she had been was prompted by the momentum of the #MeToo movement.

“In 2015, you either quit your job or accepted the fact that misogyny is rampant in all workplaces. When the Harvey Weinstein story broke and other high-profile cases started garnering attention, I felt like it was safe and the right time to file a complaint with the university,” she said.

But the university’s investigation process was slow. Professor Lopez did not provide a written response to Ms Frederes’ allegations until May 2019. The general counsel for Ms Frederes’ employer, Vital Strategies, was moved to complain to the university about the sluggish pace.

Ms Frederes said she had to fight to learn whether or not the university-commissioned investigation had believed her account. She said she only received a copy of the report in October 2019 after sending an email to senior university management, including the office of the vice chancellor, threatening to go public.

Ms Frederes said she wanted to tell her story now to put the commitment of powerful institutions such as the University of Melbourne to stamping out sexual harassment to the test.