Things turned ugly immediately after No. 15 Wisconsin’s 77-63 victory over Michigan on Sunday.

In the postgame handshake line, Michigan coach Juwan Howard and Wisconsin coach Greg Gard got into a verbal altercation that turned physical when both teams convened near the scorer’s table.

Howard was upset that Gard called a timeout in the final minute of the game when Wisconsin held a big lead. Howard said something to Gard as they shook hands. Gard grabbed Howard with his left hand to stop him from moving along the handshake line and the situation quickly escalated with both coaches clearly angry.

Here’s what was shown on the CBS broadcast:

A fight broke out between Michigan and Wisconsin during the postgame handshake line. pic.twitter.com/AiWIwyzj8w

What prompted the fight?

The game was close at halftime but Wisconsin was able to build a sizable lead throughout the second half and cruise to a comfortable victory.

With 48 seconds to play and Wisconsin up 76-57, Gard called a timeout to get his starters off the floor and insert his bench players, including several walk-ons, into the game. Michigan was still playing hard and employing a full-court press defense. Wisconsin’s inexperienced players struggled to advance the ball up the floor and turned it over, leading to a Michigan layup.

With 15 seconds to go, Gard explained that he called another timeout to make sure the players on the floor could break the press and advance the ball past half-court while avoiding a 10-second violation.

"Apparently, he didn't like that I called a timeout."

Wisconsin coach Greg Gard explains what led to the postgame fight with Juwan Howard and the Michigan team. pic.twitter.com/tjgRpGsCQB

No matter the reasoning, that timeout irked Howard. Once the game ended, Howard had something to say to Gard as they proceeded past one another. Soon after, the altercation took place.

"I didn't like the timeout being called. I thought it was not necessary at that moment, especially with it being a large lead. I felt that wasn't fair to our guys," Howard said after the game.

Howard told reporters that he let Gard know he would "remember" that timeout and that he believed the Wisconsin side escalated the situation.

More from Howard on what led to everything that transpired after the game… pic.twitter.com/nX3NCCSouY

Juwan Howard will likely be suspended

What happens next? Howard will certainly face a suspension — potentially a multi-game one. Gard and assistants on both sides could face discipline, too. The Big Ten will scrutinize the video to see which players threw punches, which could also lead to suspensions.

After the game, Wisconsin athletic director Chris McIntosh said he had already been in contact with Big Ten commissioner Kevin Warren.

"I expect the league is going to act swiftly and aggressively," McIntosh said.

Michigan athletic director Warde Manuel said he has apologized to McIntosh and other Wisconsin officials for "the totally unacceptable behavior."

“There is no excuse for any of our staff or student-athletes to get into a physical altercation with others regardless of instigating factors," Manuel said. "I reached out and apologized to Chris McIntosh and President Coleman has reached out to UW Chancellor Blank to apologize for the totally unacceptable behavior. We will review the situation more thoroughly and work with the Big Ten Conference as they determine their disciplinary actions and will determine if further disciplinary actions are warranted.”

In a statement, the Big Ten said it is "assessing the incident."

The Big Ten Conference is aware of a physical altercation involving Michigan Head Coach Juwan Howard at the conclusion of the Michigan Wolverines and Wisconsin Badgers men’s basketball game. The conference is in contact with both member institutions and is currently assessing the incident. The conference will provide more information and will take swift and appropriate disciplinary action when it completes its review.

Wisconsin, which improved to 21-5 overall and 12-4 in Big Ten play with the win, is in the thick of the Big Ten title race. The Badgers are now tied with Purdue and Illinois for first place in the conference. Purdue plays Rutgers later Sunday and could move back into first place. Wisconsin has four regular season games remaining. Next for the Badgers is a trip to Minnesota on Wednesday.

Michigan, meanwhile, dropped to 14-11 overall and 8-8 in conference play with the loss. The Wolverines are squarely on the NCAA Tournament bubble and now could potentially have to play multiple games without their head coach.

Michigan has five regular season games remaining, beginning with a home game against Rutgers on Wednesday. 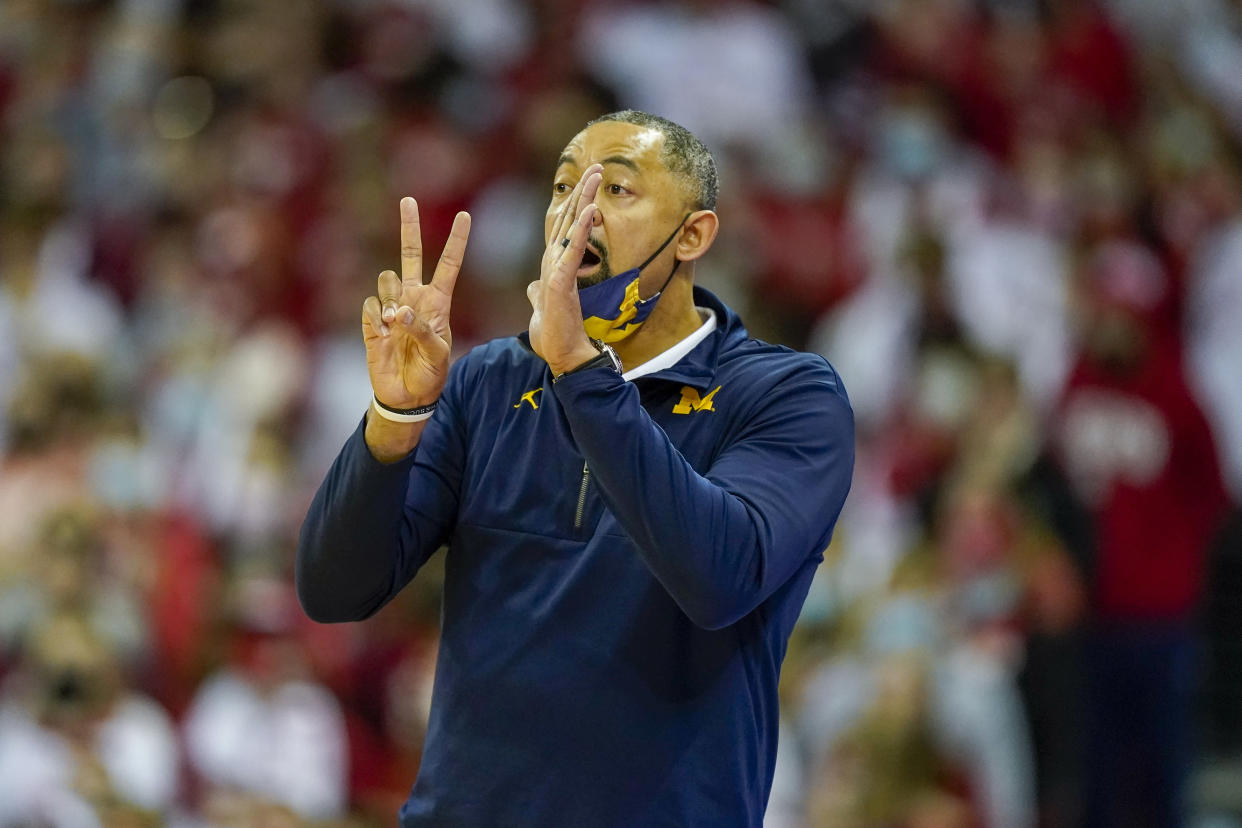