This is the shocking moment two refugees jump out of a lorry when they realise it is not heading to Britain – after getting in by ‘cutting a hole and climbing through the side’.

The men could be seen climbing down from the lorry just outside Brussels at around 10.20 this morning.

Lorry driver Samuel Teplicky, 36, from London, recorded the footage and believes the men escaped after realising they were heading away from Britain rather than towards it.

He was driving the UK to Belgium route when he saw the men clamber out of the lorry.

The first man seemed to have no issue climbing down and could be seen sprinting away from the scene.

The other man took far longer to clamber free before he too made his escape.

They were dressed in dark clothing with one wearing a hat and the other having his hood up. 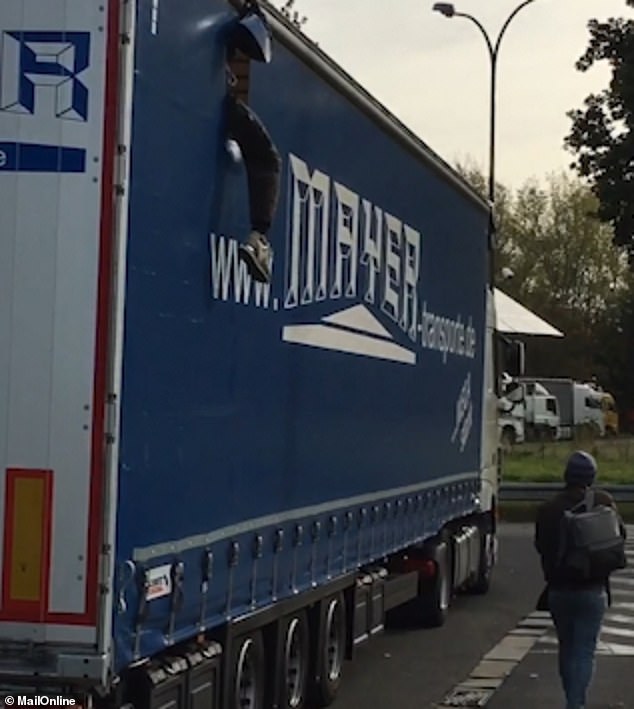 Two men, who appear to be refugees, climb out of the side of a lorry outside Brussels and flee after realising they weren’t headed to the UK

They carried bags and ignored the shocked German owner of the lorry, who tried to challenge them. He could be seen filming the stowaways.

Mr Teplicky, originally from Slovakia, told Mail Online: ‘I was around 15 or 20 minutes outside of Brussels when this happened. We were parked up in an area for lorries and cars to take a break.

‘I heard the German driver from the lorry ahead shout as he saw people jump out of his lorry through a hole on the side.

‘I spoke to the driver and he told me he was heading back to Germany. He said the hole hadn’t been in his lorry before and so the guys must have cut it and got in. 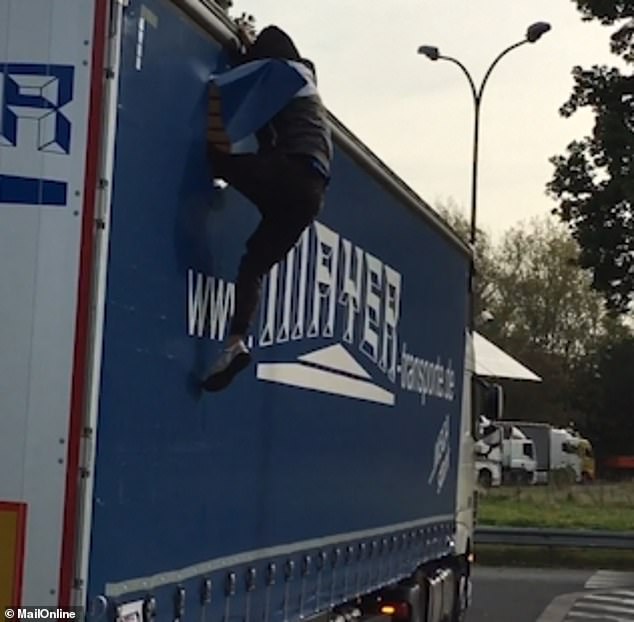 The first man climbed down athletically, though the second (pictured) struggled a bit. Both were dressed in dark clothes and tried to keep their faces covered

‘He mentioned he got some sleep at the last pit stop so they must have climbed on top and used a knife to cut the hole. It seems like the refugees jumped out in Belgium after finding out they were heading in the wrong direction.

‘They were young guys, less than 30 and ignored the German driver. They disappeared into the woods afterwards.’

Mr Teplicky added that he had never seen anything like it before but admitted that his co-driver and some other lorry drivers had seen similar things.

He added: ‘It’s crazy to see something like this. You don’t see it every day.’ 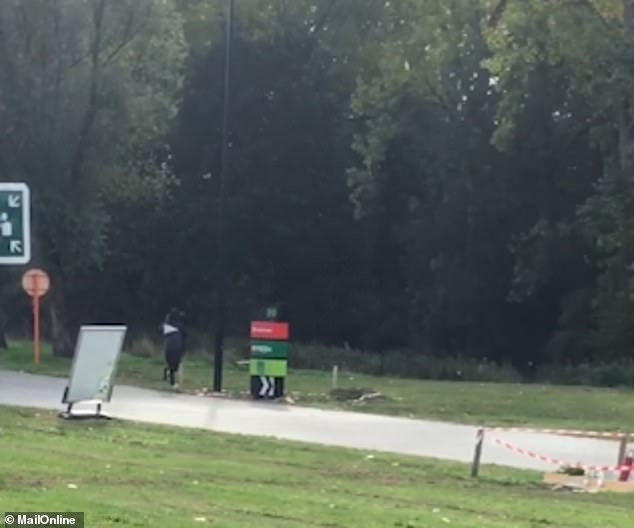 After leaping out of the lorry, both men fled to the woods and disappeared – leaving several truck drivers stunned