London: Millions of people will be told to refrain from travelling outside their local areas and could be banned from mixing with other households even outdoors, amid fears that some NHS hospitals in the north-west could become overwhelmed within days.

Downing Street has been briefing mayors and council leaders on the planned three-tier system of COVID-19 restrictions for England, which is expected to be announced by Prime Minister Boris Johnson in Parliament on Monday. 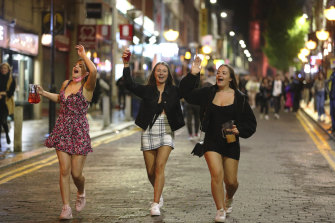 People are out socialising in the Liverpool city centre on Saturday, ahead of new lockdown measures expected to be announced by Prime Minister Boris Johnson on Monday.Credit:AP

Joe Anderson, the mayor of Liverpool, said he was in discussion with No.10 about placing the city into the third tier, amid mounting concern about the number of cases and the spare capacity in local hospitals' intensive care units.

The talks included discussions over deals that would give local leaders greater autonomy over measures and testing in their area, in exchange for helping to enforce and explain the rules.

Plans for the third, or "very high", tier are understood to include guidance asking residents not to travel outside of their area other than for specific reasons such as work and education. Local mayors said they expected pubs and bars in these areas would have to close, with restaurants able to remain open until 10pm.

Mayors will also be able to deploy new local volunteers to knock on doors and ask people to self-isolate, the Sunday Times reported.

Separately, Downing Street is inviting local leaders due to be placed in the "very high" tier to request the closure of specific types of hospitality or leisure venues, including beauty salons and sports centres – having acknowledged that the government had not done enough to achieve "local buy-in" for some of the existing restrictions faced by areas with high infection rates in the north-east and north-west.

Under the plans, the government will retain the right to order local closures if necessary. But mayors and council leaders have been told that ministers want them to "co-design" restrictions to ensure that there is local consent for the new rules and that they can then help to explain them to residents.

Leaders of major cities in northern England have asked for more generous economic support for workers and businesses facing local lockdowns, saying the government's current proposals would wreak economic hardship on their citizens.

Under the new COVID alert system, all areas of the country would be categorised as "medium", "high", or "very high", with Liverpool expected to be the first to enter the third tier and discussions ongoing with leaders in Greater Manchester and Lancashire, where rising infection rates are also causing grave concern.

Sadiq Khan, the mayor of London, who has been in regular contact with Hancock, is understood to believe that additional restrictions in the capital are now highly likely, which in practice would mean the city being placed into the second, "high", tier.

Large parts of northern England have already been hit with a range of additional curbs on social life, such as a ban on different households mixing indoors, but the south has largely escaped stricter measures, other than the national "rule of six" and 10pm curfew for pubs and restaurants.

The three-tier system is meant to clarify the patchwork of rules for England that has evolved since infection rates started to climb again in September. But the proposals to allow local leaders to request hospitality and leisure closures in their own areas would lead to a less uniform system than previously expected.

The talks, led by Sir Edward Lister, the Prime Minister's chief strategic adviser, came after Liverpool mayor Joe Anderson said: "The main point of the imposition of the measures are clearly that: imposition. We have not been consulted."

Amid discussions with the government about local leaders taking a greater role in enforcing COVID-19 rules in their area, Andy Burnham, the Mayor of Greater Manchester, said: "We believe much stronger enforcement powers are what is needed. I'm talking about summary closures powers for premises that are not COVID secure. And, I'm not just talking about pubs or restaurants, I'm talking about shops or any setting where the right procedures are not in place."

On Friday, Rishi Sunak announced that the government would fund 67 per cent of the wages of staff working for firms forced to shut by COVID-19 restrictions.

The announcement followed reports that hospitality firms could be shut in some areas.

The Telegraph, London with Reuters