More than 1 million Ukrainians have fled their homes to seek shelter in other country's from Russia's punishing airstrikes and ground invasion. Tens of thousands more have been displaced but remain inside Ukraine, including one mother and her three children who finally reached safety in the city of Lviv — more than 600 miles west of their home.

Kateryna Stoyanova traveled to Lviv from Zaporizhzhia, where she said the Russian army was fast approaching. When they got "really close," she said, they got on a train and left.

"The air raid sirens were permanently on and people were told to go to shelters," she told Reuters. "For a few days me and my kids kept on going down to the shelters — I do not know how many times."

But making the decision to leave wasn't easy as many in Zaporizhzhia had decided to stay behind. 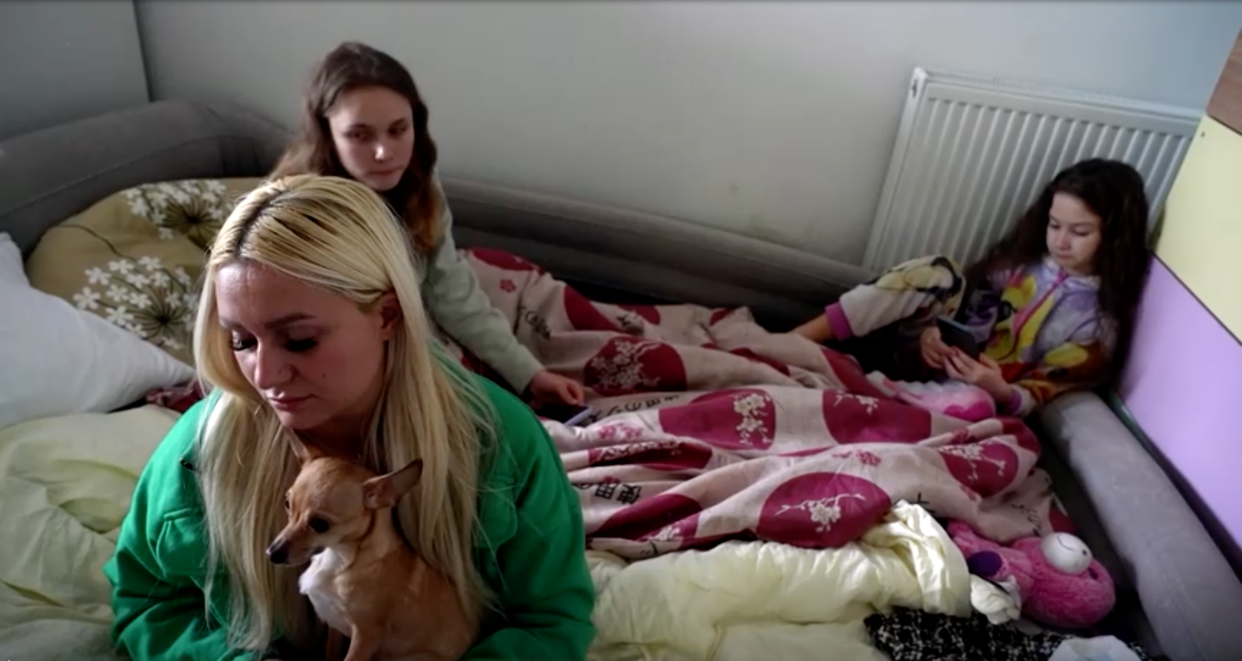 "Some people stay, wait for this to end," Stoyanova said. But she felt she couldn't risk it with her children.

"It has been going for eight years and I have no idea how long it will last," she said of the war that simmered in Ukraine's Donbas region after Putin's last invasion in 2014, before it erupted into a full-scale conflict with his latest assault a week ago. "One would like it to end, but there is simply no end to it."

Women and children from all over the country have gathered in makeshift shelters in Lviv. Yana Balytska traveled there from Vyshneve, near the capital Kyiv. Russian forces are poised between 20 and 40 miles north of Kyiv, and the U.S. has warned they could move to surround it within a week, but like many of the country's major cities, it has already suffered major damage from shelling.

"We left because of the shooting. They were not shooting in our town, but Kyiv was under fire and areas nearby," Balytska told Reuters. "Yesterday we were standing on a platform waiting for the commuter train and literally over my head, flew the missile that hit the TV tower."

The United Nations human rights office says at least 227 civilians have been killed since Putin launched the attack last on February 24. Ukrainian officials put the toll at more than 2,000, including 21 children.

For Stoyanova, having to evacuate her home was familiar. Prior to living in Zaporizhzhia, they lived in Donbas. When Russian troops invaded the eastern Ukraine area in 2014 and war broke out, they had to leave.

"I have been through this before, but experiencing it for the second time, it was an equally huge shock," she said. "You start living in peace and then the same happens again."