This is the shocking moment that a hit-and-run driver who crashed into a pram, killing a two-week-old baby boy, fled the scene of the crime.

James Davis, 35, leapt out of his white BMW 1 Series 116d after hitting a Ford B-Max on High Street in Brownhills, near Walsall, on Easter Sunday last year.

He mounted the pavement on the opposite side of the road and crashed into 18-day-old Ciaran Leigh Morris, who was with his mother and father, Codie Holyman and Camaron Morris.

Davis fled to his girlfriend’s Bloxwich home, and called police on himself some 40 minutes after the crash.

In the lead up to the fatal moment, Davis was seen speeding through the streets of Brownhills.

Today, Davis was convicted of causing death by dangerous driving and causing the death of Ciaran Morris by driving while uninsured.

Jurors at Wolverhampton Crown Court found him guilty after two hours and six minutes of deliberation.

He has been sentenced to six-and-a-half years in prison. 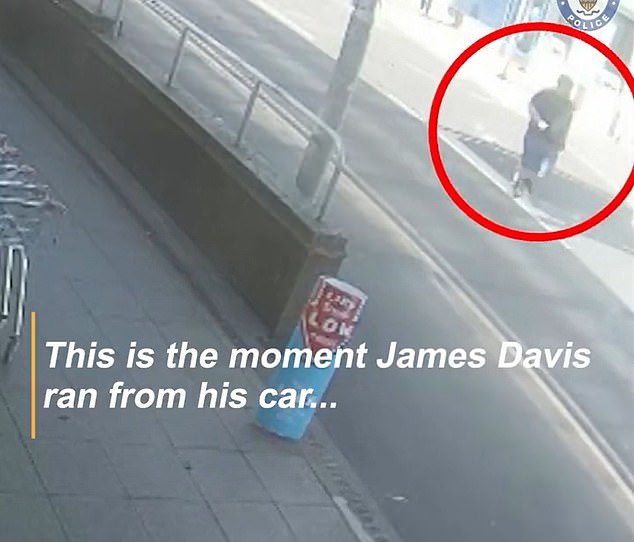 James Davis, 35, fled from his white BMW 1 Series 116d after hitting baby Ciaran Leigh Morris in his pram on on High Street in Brownhills 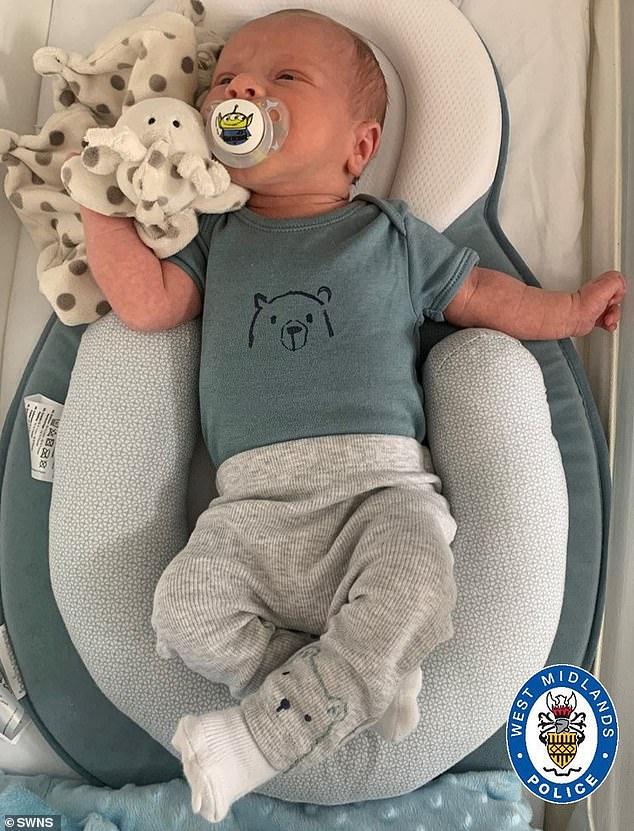 David told his trial he blacked out after a coughing fit and could not remember hitting Ciaran’s pram.

The trial heard Davis, who had a teenage passenger, had been travelling at 67mph in a 30mph zone shortly before the fatal crash.

Following the tragedy, the 35-year-old ran off and told a passer-by he ‘had killed a baby and was going down for a long time’.

The court was told Davis left the scene after the smash before stopping a passer-by in Pelsall Lane and asking to use their mobile phone to dial 999.

He was arrested after telling police he was at his girlfriend’s Bloxwich home, where he had gone to see his two-year-old daughter. 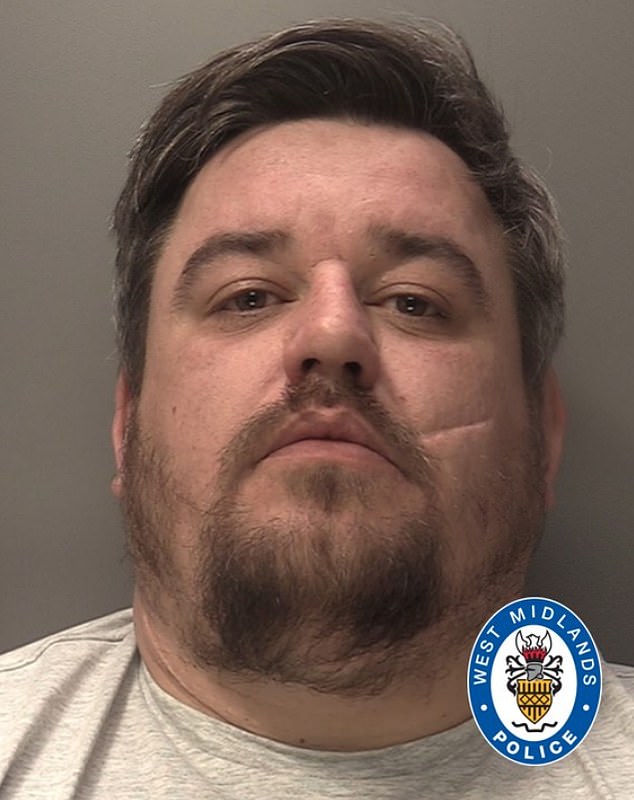 Police bodycam footage played to the court showed Davis telling PC Tom Rust as he was arrested: ‘A baby, f***s sake. I’m sorry bab. I blacked out, I was doing 20mph.

‘I weren’t even speeding or nothing. I blacked out. I aint killed no one on purpose. F***ing hell man.

‘I accept I’m going to prison if somebody’s died… People were screaming “I killed a baby” so I just wanted to see my baby before I go.’

Tests later revealed Davis had cannabis in his bloodstream.

He had 1.7mg of THC in 1 litre of blood. The legal limit is 2mg. There was no alcohol in his system following the crash, the court heard.

Opening the case against Davis last week, prosecutor James Curtis QC said: ‘This case concerns the tragic killing of an 18-day-old child by an act of exceptionally bad and dangerous driving by this defendant, James Davis.

‘He was driving a small BMW saloon in Brownhills, Walsall — it was in a shopping area, populated by shoppers and passers-by. Driving conditions were perfect.

‘Suddenly he made a manoeuvre which was to prove fatal.

‘First he drifted, veered, out of his side of the road, over the centre line, and struck a car which was coming in the opposite direction, on the correct side.

‘This did major damage to both cars.

‘From there, the BMW swerved in a curve, on the wrong side of the road, and on to the opposite pavement, where a couple were wheeling their new baby, called Ciaran Morris.

‘The car crashed into the pushchair, the pram, before hitting the wall and inevitably stopping.

‘It caused fatal injuries to the head and body of that little child, who died in hospital soon afterwards despite all attempts to save him.’ 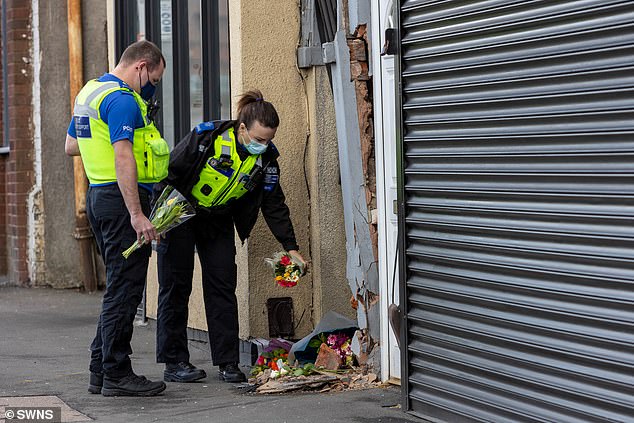 Police officers lay flowers on High Street in Brownhills, near Walsall, after two-week-old Ciaran was killed by hit and run driver Davis

In the aftermath of the crash, frantic Mr Morris was heard to scream at Davis: ‘You just killed my son.’

Both parents also cried out ‘the baby, the baby’ as they tried to revive their son on the pavement.

Ciaran suffered fatal injuries to his head and body — including a fractured skull. He was rushed to Walsall Manor Hospital but medics pronounced him dead at 5.30pm after being unable to re-start his heart.

His mother, Ms Holyman, suffered a broken collar bone and a bruised foot and has constant back pain as a result of the crash.

The prosecutor said of Davis: ‘He was fully fit, and he was clear-headed enough, the Crown say, to invent what we say is a false defence.

‘The Crown say there is no medical excuse for this driving at all — that is fabrication.’

During his evidence, Davis accepted reaching 67mph in a 30mph area but said he was driving within the speed limit when the crash occurred.

He claimed an unexpected ‘coughing fit’ made him pass out at the wheel moments before the fatal smash.

He told the court: ‘The last thing I remember was going starry-eyed. I can’t remember any of it. It’s like everything went blank.’