Mother, 29, launches legal action after police dog ripped her leg open when she was arrested by officers who say she was threatening violence

A mother has launched legal action after a police dog ripped her leg open as she was arrested by police for ‘threatening violence’.

Nikki Jordan, 29, claimed she suffered a severe asthma attack after being wrestled to the ground in Netherton, Merseyside, and later needed emergency surgery on her leg which resulted in 86 stitches.`

Merseyside Police said Ms Jordan had a piece of glass in her hand and had made threats to harm the public, but her legal team argue she posed no threat at the point when the dog was let loose.

Ms Jordan accepts she had suffered a mental health episode and was behaving erratically but says she had called police to ‘hand herself in’ after an incident earlier that evening.

Much of the arrest was captured on mobile phone cameras with the footage showing Ms Jordan turning her back on three officers, including a dog handler with a German Shepherd, before being wrestled to the ground. 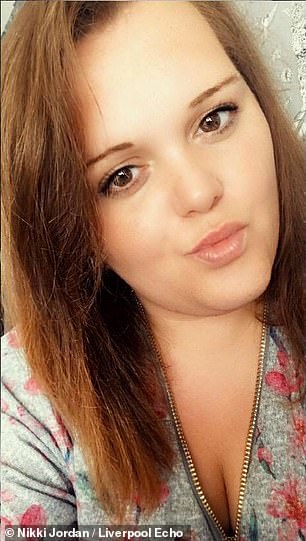 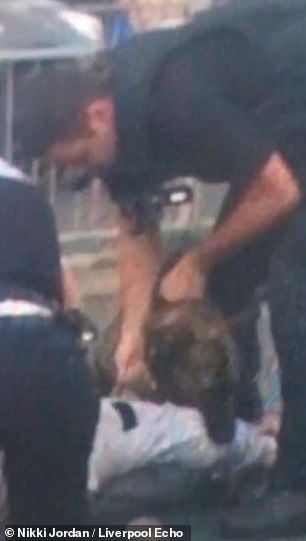 Nikki Jordan (left) said she suffered a severe asthma attack after being wrestled to the ground in Netherton, Merseyside, and later needed emergency surgery on her leg which resulted in 86 stitches (right the dog with her leg clamped in its mouth

Ms Jordan can be heard shouting ‘get the dog off my leg, the dog is biting my leg’ while officers restrain her shouting ‘do not resist’ and ‘stop f****** struggling now’.

Her legal team has launched a complaint which also alleges she was struck with police batons and rendered unconscious by an officer applying ‘pressure to her neck’ after the phone footage ends.

They have lodged a complaint with Merseyside Police and he force’s Professional Standards department is investigating her claims.

Iain Gould, a solicitor at DPP Law, said Ms Jordan had been a victim of ‘a totally unjustified use of force’.

He said: ‘This is a disturbing incident in which a Police dog has been allowed to savagely bite my client’s leg whilst she was being held down on the ground by three officers.

‘My client was suffering from mental health issues and was in need of care and assistance but instead was made the victim of an animal attack.

‘The wound she has suffered is likely to leave her with life long scars.’

The footage taken by witnesses shows one officer pointing what appears to be a Taser at Ms Jordan. 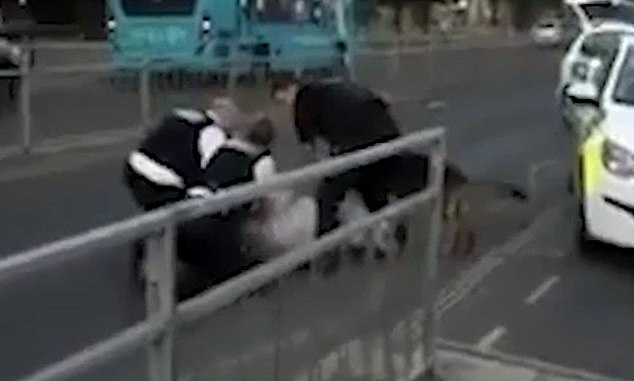 Ms Jordan can be heard shouting ‘get the dog off my leg, the dog is biting my leg’ while officers restrain her shouting ‘do not resist’ and ‘stop f****** struggling now’

According to a letter of complaint lodged with the force, Ms Jordan was ‘intoxicated and in a state of emotional distress’ when the officers arrived.

The letter says: ‘As our client walked close to the police car, the three officers leapt upon her and bore her to the ground, whereupon the police dog bit her right leg badly.

‘At the point when the police dog started to attack our client, she was being held on the ground by the three officers and there was no justification for the dog to either be instructed or allowed to bite our client.

‘The dog handler subsequently had to pull the dog’s head upwards to get the animal’s mouth off our client’s leg.

‘Our client, bleeding from the wounds to her leg, was subsequently handcuffed and placed in the rear of a police car.

‘When she protested about her treatment, an officer dragged her from the car and put her to the ground again so that she was lying on her left hand side and could feel officers kneeling up against her back. 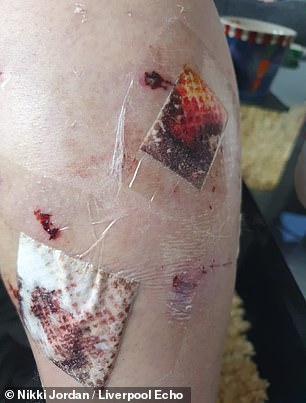 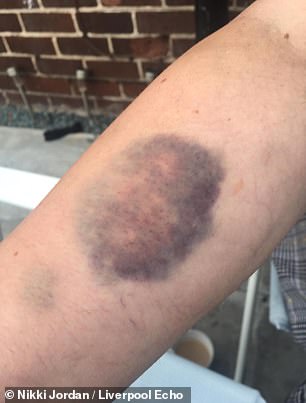 ‘Our client then felt one of the male officers applying pressure to the back of her neck, she believes that this caused her to lose consciousness, and then she came round, feeling the officer pulling on her ears.

‘Our client also has baton marks to her legs. Our client understands from the fact of these marks, and what witnesses told her afterwards, that officers struck her legs with batons after taking her from the car, although because of her emotional/ physical distress she does not recall this happening.’

According to the complaint the officers were then forced to call an ambulance when Ms Jordan suffered from an attack of what she says was brittle asthma, a rare and severe form of the disease.

Ms Jordan says paramedics arriving at the scene performed CPR after finding she had ‘no pulse’, but she was revived and rushed to Aintree Hospital – where she underwent surgery on her right leg.

Ms Jordan, who said she has attempted suicide three times since the arrest, said she has post-traumatic stress disorder, depression, anxiety and psychosis.

She said: ‘I understand my behaviour was erratic and unacceptable but I was trying to hand myself in when they have come with the Taser and dog and approached me aggressively.

‘This intimidated me and I walked towards the police car, which is when they jumped on me, and because the dog handler loosed the dog it attacked my leg, and I needed 86 stitches.

‘It’s affected me really badly, I’ve had three suicide attempts since this.’

In relation to the complaint, a police spokeswoman said: ‘We can confirm we have received a complaint in relation to an incident in Marian Square in Netherton on 31st May this year.

‘The complaint is currently being investigated and as such it would be inappropriate to comment further at this time.’