The National Trust has been accused of pursuing a ‘woke’ agenda after introducing gender-neutral toilets at a property amid fears they could pop up elsewhere.

A row broke out online after a woman said she opened a door in toilets at Tredegar House in Newport, South Wales, to reveal a man urinating without the door locked.

A sign on the lavatory door of the café at the 17th-century property said: ‘Gender neutral toilets. Alternative toilet facilities are available by the main car park.’

Bosses said the gender neutral toilet was introduced during refurbishment – and that men’s, women’s and accessible toilets are available near the visitor reception.

But visitors threatened to cancel their membership – which costs £76.80 a year for adults or £133.80 for a family – and boycott its 500 sites across Britain amid the row. 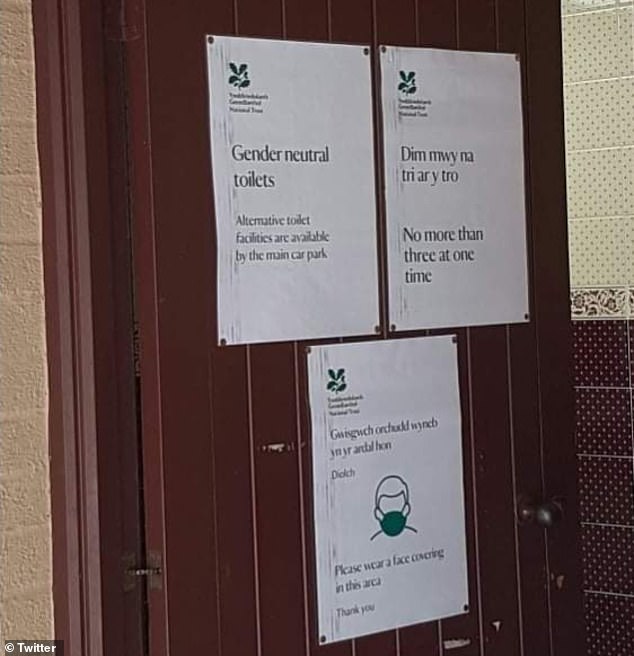 A sign on the lavatory door of the café at Tredegar House in Newport, South Wales, says: ‘Gender neutral toilets. Alternative toilet facilities are available by the main car park’ 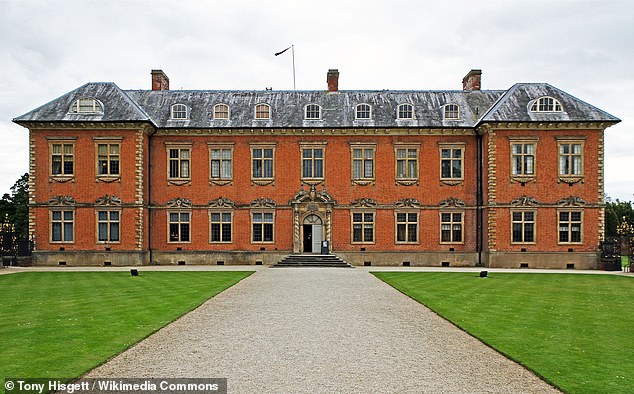 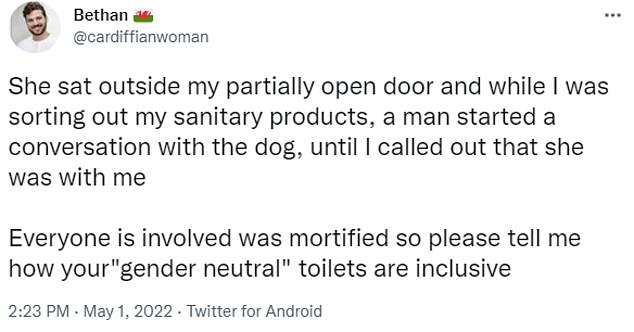 One visitor from Cardiff called Bethan tweeted that she was visiting the house alone on Sunday and saw a man urinating in one of the cubicles without the door locked.

She said: ‘National Trust, I was forced to use your ‘gender neutral’ toilets. I was walking my friend’s dog alone so had no choice but to take her with me.

What are the rules on gender neutral toilets?

The Department for Levelling Up, Housing and Communities has stated that ‘there needs to be proper provision of gender-specific toilets for both men and women, with a clear steer in building standards guidance’.

It pointed out in guidance issued last year that the trend towards gender-neutral toilets during the building or refurbishment of premises ‘places women at a significant disadvantage’.

The Equality Act 2010 states that sex and gender reassignment are both ‘protected characteristics’, but the guidance said that this ‘does not mean that gender-specific toilets should be replaced with gender-neutral toilets’.

The Equality and Human Rights Commission said last month that toilets can be legally limited to men and women as long as there are separate gender-neutral facilities, and as long as the views of trans people are taken into account. It explained this guidance through two examples.

One is a small cafe with limited space and facilities for public use which has separate lockable, self-contained male and female toilets with hand basins in single units. The EHRC said to ensure they are fully inclusive, and to make the most effective use of the available facilities, the cafe could decide to make them all gender neutral.

A second example is a community centre which has separate male and female toilets. The centre could conduct a survey in which some service users say that they would not use the centre if the toilets were open to members of the opposite biological sex, for reasons of privacy and dignity or because of their religious belief.

It decides to introduce an additional gender-neutral toilet, and puts up signs telling all users that they may use either the toilet for their biological sex or to use the gender neutral toilet.

‘First door I tried opened to reveal a man peeing without the door locked.

‘I didn’t want to take the dog in my cubicle with me so. She sat outside my partially open door, and while I was sorting out my sanitary products, a man started a conversation with the dog, until I called out that she was with me.

‘Everyone is involved was mortified, so please tell me how your ‘gender neutral’ toilets are inclusive?’

Another woman visitor said: ‘We noticed this too while on a family outing. No single sex toilets. I had to stand outside the door for my teenage niece, as she was extremely uncomfortable, as there were men waiting to use the same toilet.’

And a further social media user tweeted: ‘Hi National Trust, stop being woke and restore the status quo regarding toilets.’

But a National Trust spokesman told MailOnline today: ‘At Tredegar House we have men’s, women’s and accessible toilets near our visitor reception.

‘We have put temporary signage up on the toilets at the Brewhouse while we carry out essential maintenance work. The sign explains that we have alternative toilets available near the visitor reception.’

Last week Chancellor Rishi Sunak said that biology must be the primary policy driver when it comes to laws around gender-neutral toilets and transgender women competing in sport.

He told a Mumsnet user that women’s rights and trans rights should both be respected, but stressed: ‘I’m of the view that biology is important – it’s fundamental, it’s critical to how we approach those type of questions.’

It comes after the Equality and Human Rights Commission watchdog said last month that toilets can be legally limited to men and women as long as there are separate gender-neutral facilities, as long as the views of trans people are taken into account.

The row over gender-neutral toilets is the latest subject causing controversy over perceived ‘woke’ ideals at the Trust.

The Trust was cleared of breaking charity law last year over a report which detailed links between 93 of its properties and historic slavery and colonialism.

Amid a huge backlash over the organisation’s ‘wokeism’, Winston Churchill’s former home of Chartwell in Kent, was among the properties on the list because the wartime prime minister once held the post of Secretary of State for the Colonies.

The move prompted a fierce backlash from some MPs and peers, and the Trust faced accusations of ‘wokeism’ and of jumping on the Black Lives Matter bandwagon. 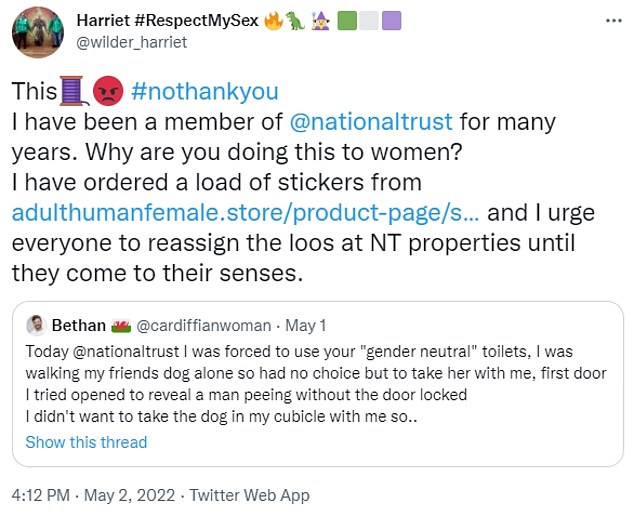 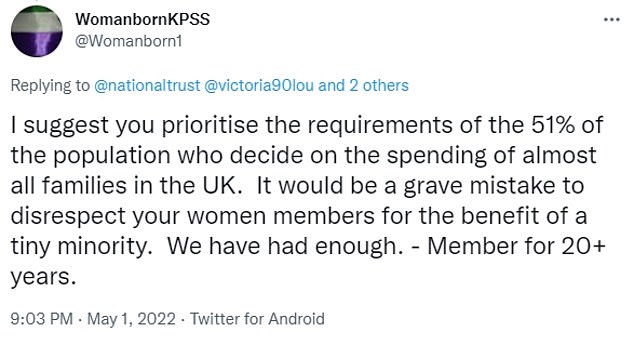 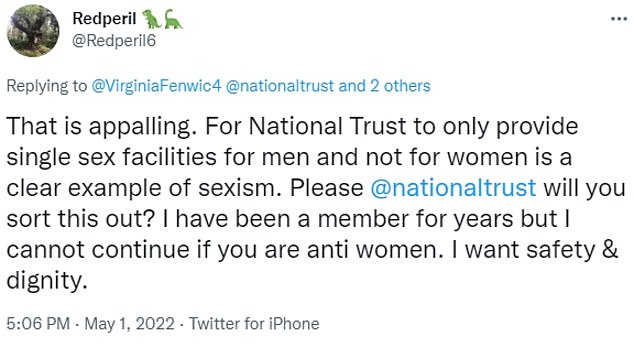 Following complaints, the charities regulator opened a case to examine critics’ concerns, but concluded the Trust had acted in line with its charitable purposes and there were no grounds for regulatory action against it.

Then in January, the Trust’s director general Hilary McGrady said it was still uncovering history every day, and that a wider, more detailed picture needed to be painted, thus vowing to continue its colonialism review.

In March it was revealed that the charity’s membership had bounced back from a pandemic-related lull and was almost back to 2019 levels.

Tredegar House has been deemed one of the most significant late 17th-century houses in Britain and is set within 90 acres of gardens and parkland.

It was home for more than 500 years to the esteemed Welsh family the Morgans, later Lords Tredegar, who owned more than 40,000 acres in Monmouthshire, Breconshire and Glamorgan.

The National Trust took over the management of Tredegar House, its gardens and parkland from Newport City Council in March 2012.