Kastines, Greece: Thousands of migrants and refugees massed at Turkey's western frontier on Sunday, trying to enter Greece by land and sea after Turkey said its borders were open to those wanting to reach Europe.

In Syria, Turkish troops shot down two Syrian war planes after the Syrian military downed a Turkish drone – a major escalation in the direct conflict between Syrian and Turkish forces. 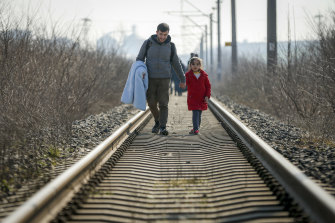 Migrants head for Greece near the Pazarakule border crossing in Edirne, Turkey on SundayCredit:AP

Turkey's decision to ease border restrictions came amid a Russia-backed Syrian government offensive into Syria's north-western Idlib province. That offensive has killed dozens of Turkish troops and led to a surge of nearly a million Syrian civilians fleeing the fighting toward Turkey's sealed border.

Turkey backs the Syrian rebels fighting in Idlib province, and has sent thousands of troops into the area. Idlib is the last opposition-held stronghold in Syria, and is dominated by al-Qaeda linked fighters.

A Turkish official said the fighting in Idlib was directly linked to Turkey's decision to open the gates for refugees. 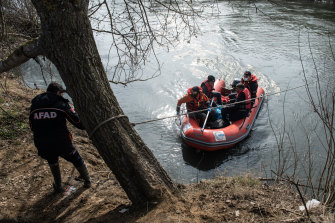 Refugees and migrants are rescued from an island in the middle of the Evros river on Sunday. They had been stuck there for two days after trying to cross from Turkey to Greece.Credit:Getty Images

"Europe and others must take robust action to address this monumental challenge," said Fahrettin Altun, the communications director for Turkey's President Recep Tayyip Erdogan. "We can't be expected to do this on our own."

Erdogan's decision to declare his country's borders with Europe open made good on a longstanding threat to let refugees into the continent. His announcement was an apparent attempt to pressure Europe into offering Turkey more support in dealing with the fallout from the Syrian war to its south.

Under a €6 billion deal in 2016, Turkey agreed to stem the tide of refugees to Europe in return for financial aid after more than a million people entered Europe in 2015. It has since accused the EU of failing to honour the agreement. 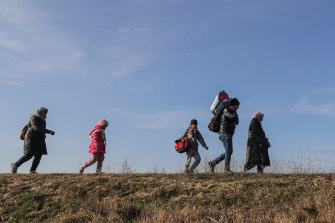 Turkey announced on Saturday that it would open its borders to allow refugees to cross into Europe.Credit:Getty Images

Earlier on Sunday, Syria said north-western air space was closed and any aircraft or drone that entered would be shot down.

The crisis in Idlib stems from a Syrian government offensive with Russian military support, which began on December 1. The heavy fighting triggered a humanitarian catastrophe and the single largest wave of displacement in Syria's nine-year civil war, with about 950,000 civilians fleeing their homes.

Turkey is worried it might come under renewed international pressure to open its now-sealed border with Syria and offer refuge to hundreds of thousands more Syrian civilians.

Twenty-year-old Afghan Ayamuddin Azimi made it to the Greek border village of Nea Vyssa. He said Turkey had opened its borders "to save the refugees" but when they got to the frontier they found the Greek side closed.

He said he crossed clandestinely anyway. "What can I do? We have nothing to do. This is our life."