Last season, the Dallas Cowboys' defense was a joke. It allowed 473 points, the most in franchise history.

There are many reasons the Cowboys' defense has now become a reason for optimism heading toward the postseason. A coordinator change to Dan Quinn helped a lot. Trevon Diggs became a Pro Bowl-level corner in his second season. But no rookie, on offense or defense, has made a bigger impact than Micah Parsons.

Parsons doesn't look like a rookie. He looks like an All-Pro. He had a play that took care of the Washington Football Team and virtually clinched the NFC East on Sunday. On a fourth down, Parsons burst through on Taylor Heinicke's right side and blasted him, knocking the ball loose. Dorance Armstrong Jr. scooped it up and scored. It was 18-0 then.

Washington rallied late, thanks to a pick-six and the offense not being able to run out the clock, but Randy Gregory's sack and forced fumble sealed the 27-20 win.

Parsons wasn't supposed to be a pass-rushing monster. He was mostly an off-the-ball linebacker at Penn State. He was good enough at that job that Dallas picked him 12th overall. The Cowboys had defensive line injuries early in the season and asked Parsons to put his hand down and rush the quarterback. They couldn't have known Parsons would immediately become one of the NFL's most dangerous pass rushers. Not only is Parsons a defensive Rookie of the Year lock, he has a good case for NFL Defensive Player of the Year.

Parsons, who had another first-half sack after his big hit on Heinicke that led to a defensive touchdown, tied a record for most sacks by a rookie in a six-game stretch. He has 9.5 over the past six games, which which ties Leslie O'Neal's mark set in 1986. Parsons has 12 sacks on the season, and Jevon Kearse's rookie record of 14.5 is within range. Parson is posting one of the better rookie seasons ever for a defensive player.

He even has enough energy to get a workout in on the sideline.

Mid-game hitters. This man is a legend. @MicahhParsons11pic.twitter.com/r0pQdbeAdT

Parsons has been a huge playmaker for a defense that has gone from one of the worst in the NFL to arguably one of the best. Football Outsiders' DVOA has the Cowboys' defense ranked fourth in the NFL. Even if you don't buy the Cowboys as a top-five defense, they're not a laughingstock anymore. Far from it. Getting linemen like Gregory (who made a remarkable play on a tipped interception to himself to start the game and had the big sack in the final minutes) and DeMarcus Lawrence healthy will only help.

The Cowboys' offense was supposed to be the reason they won the division. The offense has been good, though injuries have led to inconsistency. If the offense plays at an elite level in January — it's certainly capable — the defense can make plays behind its new rookie superstar. A Super Bowl run for the Cowboys isn't out of the question, and nobody figured their defense would be a big reason for that. 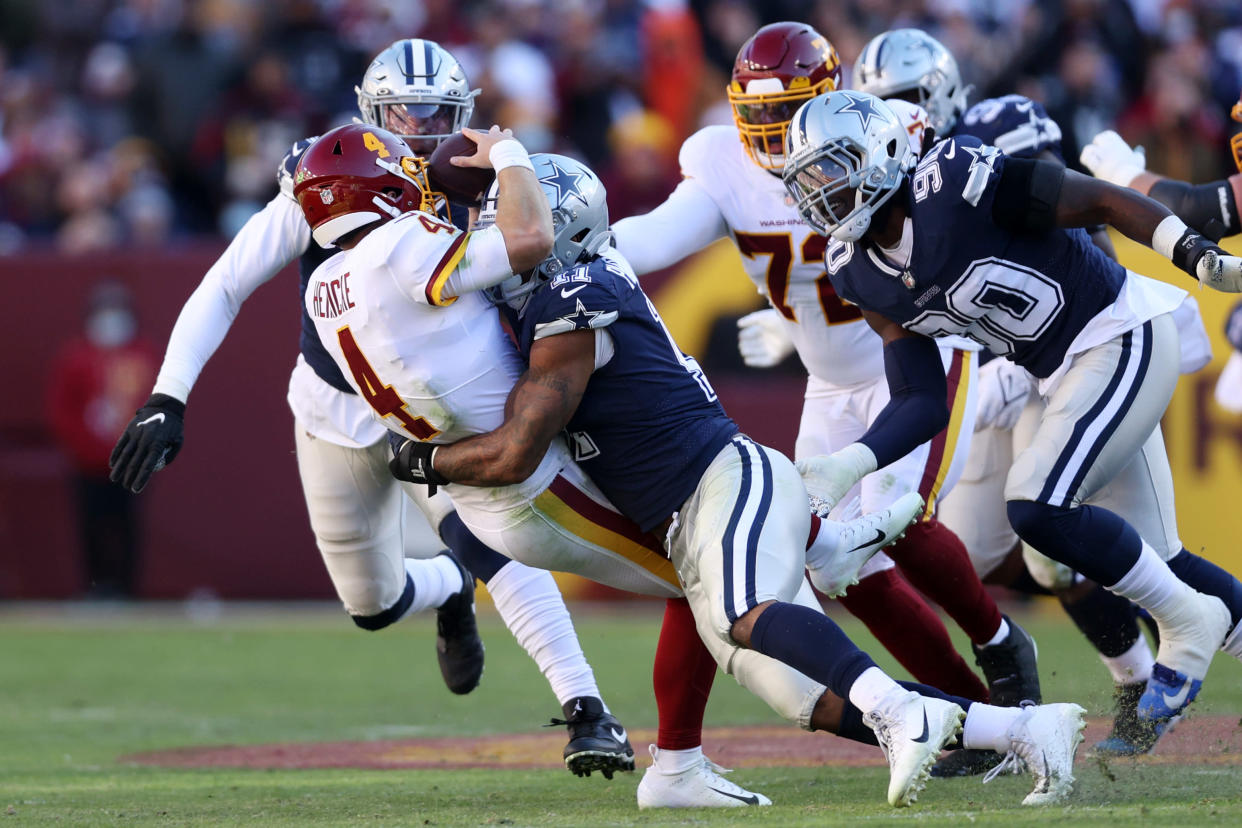 Here are the winners and losers from Week 14 of the NFL season:

George Kittle: Kittle was an absolute monster for the San Francisco 49ers in a huge win. That's why he's the best tight end in the game.

Kittle had 13 catches for 151 yards, saving the 49ers from what would have been a bad loss against the Cincinnati Bengals. The Bengals rallied from 20-6 down to force overtime. The 49ers missed a field goal to end regulation and Cincinnati scored a field goal to start the extra session. But the 49ers wouldn't be denied. Thanks to some huge catches by Kittle and a walk-off touchdown by Brandon Aiyuk, San Francisco got a 26-23 win that improved their record to 7-6 and helped them immensely in the NFC playoff race.

Kittle was the best player on the field. He made catch after catch, often in traffic. It's rare for a team to be carried by a tight end, but the 49ers experienced it Sunday.

Justin Herbert: Herbert is fun. We love quarterbacks with cannon arms, and the Los Angeles Chargers quarterback has one.

He showed it off on a great touchdown to Jalen Guyton near the end of the first half that took the New York Giants out of the game. Herbert uncorked a pass right before he got hit that went about 65 yards in the air. Guyton caught it at the goal line for a touchdown that gave Los Angeles a 24-7 lead. The Giants weren’t coming back after that. The Chargers won 37-21.

Herbert is the first quarterback with 30 or more touchdowns in each of his first two seasons. He has been hot lately. The Chargers will need him to stay hot Thursday, when the Chiefs come to town in a huge AFC West game.

Cleveland Browns' playoff chances: It doesn't matter that Lamar Jackson was out for most of the game (or that the hit from Jeremiah Owusu-Koramoah that hurt his ankle was borderline dirty). The Browns needed wins, however they can get them. Losing and falling to 6-7 would have put them in dire shape in the AFC wild-card race. A 24-22 win over the Baltimore Ravens, hanging on late after Baltimore scored and recovered an onside kick, was a much-needed step forward.

At 7-6, the Browns are fine. Not great but they're alive. There are still issues on offense, but the defense showed up Sunday. Myles Garrett had a strip sack that he recovered and scored on that put the game away. Running the ball and playing good defense is a fine formula to make the playoffs. The Browns can still make it happen.

Rashaad Penny: First-round draft picks don't always work out. For some, it takes a long time to make any impact.

Penny was the Seattle Seahawks' first-round pick in 2018. Injuries and ineffectiveness have turned him into mostly an afterthought. But an injury to Adrian Peterson opened up some carries, and Penny responded with what was likely the best game of his career. Penny had 137 yards and two touchdowns in Seattle's 33-13 win over the Houston Texans.

Penny hasn't been able to keep any momentum going for a variety of reasons, so we'll see if this is the precursor for a big finish to the season. Regardless of what happens next, Sunday had to feel good.

Tennessee Titans: It isn't hard to beat the Jacksonville Jaguars, where absentee team owner Shad Khan is content to watch Urban Meyer run his franchise into the ground. But they still count.

The Titans took care of business against a miserable Jaguars team, beating them 20-0 to improve to 9-4. The Titans pushed their lead in the AFC South to two games over the Indianapolis Colts. Tennessee has the tiebreaker, so the division is all but over. The Titans won't brag too much about a win over the Meyer-led Jaguars, but the division title will still be pretty sweet.

Anyone other than Tom Brady in the MVP race: Brady would have to do something really bad over the past four weeks to not win MVP.

He put another signature moment on the board Sunday. After the Buffalo Bills came all the way back from 21 points down to force overtime, Brady hit Breshad Perriman on a crossing route, Perriman turned upfield and had a 58-yard touchdown. That finished a 33-27 win for the Buccaneers. Brady had 363 yards and two touchdowns.

The Buccaneers are still in play for the No. 1 seed in the NFC. The biggest reason has been 44-year-old Brady, who is having an incredible season. The MVP award is his to lose.

Detroit Lions: A winning streak for the 2021 Lions wasn’t meant to be.

The Lions had a predictable letdown Sunday after winning their first game of the season last week. The Lions had many players out for various reasons and that played into the 38-10 loss.

It was an emotional day in Denver, as the Broncos honored Demaryius Thomas after his death this past week. The Broncos played with purpose and got an easy win to help their playoff hopes. The Lions are nearing the end of a rough season. At least they already got their win.

Rich Bisaccia: When Jon Gruden resigned under fire, Bisaccia was put in a tough spot as the Las Vegas Raiders' interim coach. But, it was an opportunity to be a head coach. And if the Raiders went on to the playoffs, maybe a permanent job.

An absolute embarrassment against the Kansas City Chiefs pretty much ends the Raiders' season. The 48-9 loss itself, which included a 35-0 halftime deficit, was bad enough. The Raiders began the game by huddling on the Chiefs' logo at midfield during pregame warmups. If you're going to do that, you better not get blasted by five touchdowns in the first half. The Raiders started the game by losing a fumble that was returned for a touchdown on the first play, and it never got better from there.

The Raiders will need to find a permanent solution at coach. It has been a rough season for the Raiders. The offseason isn't going to be much easier.

Zach Wilson: Playing quarterback in the NFL is hard and it's much harder as a rookie. Just because some rookies have had nice seasons doesn't mean everyone will.

Wilson hasn't had a good season. The second overall draft pick has been mostly bad, and his miserable season continued Sunday in a 30-9 loss to the New Orleans Saints. Wilson was stuck on 92 yards passing halfway through the fourth quarter. Fittingly, on the last play of the game, Wilson ran for the end zone and was stopped at the 1-yard line. He finished with a 59.8 passer rating and that was boosted by some garbage time stats.

The problem is other quarterbacks have had solid moments in the Jets' offense this season. That group features Mike White, Joe Flacco and even Josh Johnson. There's no good reason those quarterbacks should look better than Wilson.

While that's troubling, the Jets can get into the offseason and regroup. There just won't be a ton of confidence in their QB situation until Wilson's second season, at best.

Cam Newton: Newton was benched again. It's the fifth time that has happened in Newton's past 14 starts according to Jeff Howe of The Athletic.

Newton had another rough day Sunday. The story of him coming back to the Carolina Panthers was awesome and included some fun moments, but it has mostly been a bust. The Panthers' season continued to spiral downward in a 29-21 loss to the Atlanta Falcons.

Newton threw a pick-six and lost a fumble on a handoff when he tripped coming out from under center. He wasn't that bad throwing it, with 178 yards, but he got replaced by P.J. Walker in the second quarter with the Panthers trailing 17-7. The Panthers alternated between the two quarterbacks the remainder of the game.

Newton is 32 years old, so you have to wonder what comes after this season. This comeback with the Panthers hasn't worked out as anyone hoped.