No mask? No problem: supermarkets won’t ban those who don’t cover up

Supermarket chains Coles, Woolworths and Aldi are allowing customers who refuse to wear face masks to shop in their stores in Victoria, where face-coverings are compulsory.

The state’s mask-wearing policy could be relaxed when the Premier eases restrictions on Sunday but it is likely they will still need to be worn in high-risk environments such as supermarkets. 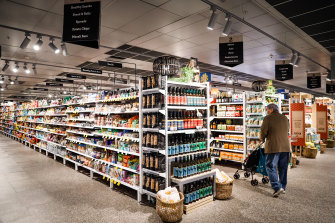 Melbourne shoppers who won’t wear a mask are being allowed in to some big supermarkets.Credit:Getty

Businesses can refuse entry to shoppers who are not covering their faces, but some of the big supermarket chains are choosing not to do that.

Other retailers, including Bunnings, Officeworks, JB Hi-Fi, Mecca and Kmart, bar mask-refusers from entering their stores.

There have been a number of positive COVID-19 cases linked to Victorian supermarkets, including stores operated by Coles, Woolworths, Aldi, IGA, LaManna and Leo's Fine Food and Wine.

Police Minister Lisa Neville said this week that retailers should be talking to shoppers who refuse to wear masks. 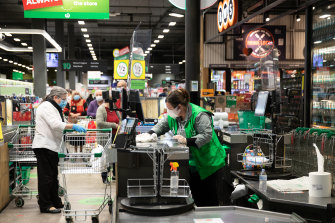 Woolworths is not enforcing mask wearing – but most customers do the right thing.Credit:Janie Barrett

"I understand for some young retail workers that is sometimes a difficult thing and some people can push back and that can be very challenging," she said.

Before masks were made mandatory, Premier Daniel Andrews asked people to wear masks in places where they were not able to socially distance, including supermarkets.

A Woolworths spokesman confirmed they did not require staff to enforce mask-wearing, explaining it was because the company did not want to put their staff in danger.

Supermarket workers have been victims of abuse during the pandemic, especially as customers panic-bought necessities.

"We expect those entering our stores to follow the directives from the Victorian government," the Woolworths spokesman said.

"We find most customers do the right thing, however, we don't ask our teams to put themselves in harm's way if a customer refuses to comply."

A Coles spokesman said that the directives of the Victorian Chief Health Officer say businesses won't be fined if customers refused to wear masks without a lawful excuse.

"Coles complies with all state and federal government requirements regarding COVID safety", the spokesman said

An Aldi spokeswoman confirmed the German discount supermarket chain also allowed their customers to shop without masks, instead encouraging them to cover their faces.

IGA and Foodworks did not respond by deadline.

"Nothing should be more important than making sure workers are in a safe environment," he said.

Professor Mary-Louise McLaws, an epidemiologist with the University of New South Wales, said it was important businesses ban customers not wearing masks as ones who don't cover their noses and mouths could infect those who do through infected particles entering their eyes.

"Rather than each individual customer having to ask somebody else to wear a mask and setting up a level of anxiety between customers, it surely should be beholden to the managers of a shop to deny entry," she said.

"It's their workplace they can enforce whatever they want," he said.

Australian Retail Association chief executive Paul Zahra said the enforcement of mask-wearing rested with police, not retail staff, and that it was up to customers to obey laws.

"Retail staff are trained in COVID-safety measures, but are not an appropriate authority for enforcing compliance measures," he said.

A Victoria Police spokesman said officers patrolled supermarkets and could fine shoppers for not wearing masks. He said they could also be called to provide back-up if a customer refused to wear one.