Victoria has recorded 32 consecutive days with no community cases of coronavirus, but at least two more cases have been discovered in Queensland overnight in a growing outbreak which has scuttled Easter travel plans for Victorians.

At least 11 incoming flights from Brisbane and another 11 outgoing flights scheduled to fly in and out of Melbourne Airport had so far been cancelled on Tuesday, after the Queensland government ordered a three-day lockdown. 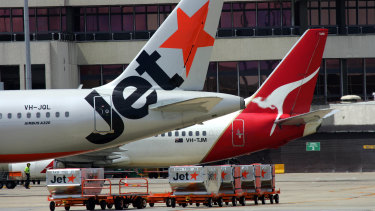 Victorian Easter travel plans have been thrown into disarray after a COVID-19 outbreak in Brisbane.Credit:James Davies

The lockdown has caused a headache for major sporting codes with the AFL planning to shift a number of games slated for this weekend to other cities, and the Brisbane men’s team grounded in Melbourne.

The NRL has also instructed its clubs to call back any players who planned to play in the Queensland Cup competition this weekend.

Victorian residents currently in Greater Brisbane, including the City of Brisbane, the City of Ipswich, Logan City, the Moreton Bay region and Redlands City can apply for a permit to fly back, but must go straight to their homes and quarantine for 14 days.

Anyone in Victoria who has been in Greater Brisbane since March 12 must isolate, get a coronavirus test within 72 hours, and stay at home until they receive a negative result.

Byron Bay in NSW and Gladstone in central Queensland were also declared orange zones on Monday evening, meaning anyone in Victoria who was in either place after March 26 must isolate, get a coronavirus test within 72 hours, and stay home until they receive a negative result.

Professor Sutton advised Victorians planning to travel north this weekend for Easter to be aware the situation could change at short notice.

“I understand that people have also booked things in well in advance, some people have paid upfront and have had multiple cancellations,” Professor Sutton told ABC Melbourne on Monday evening.

“If you’re flying into a regional airport outside Brisbane, it’s not an issue at all as you’ll be going into a green zone. You’ll still need to complete a permit to come back into Victoria.

“But again, we’ve got hundreds of people who’ve been to these exposure sites across Queensland and now into northern NSW, some of those individuals may test positive, and some of them might have been to other areas of Queensland, including in regional Queensland, so you know it’s always a risk, and you just need to play it by ear and make a decision for yourself.

“Popular locations like Noosa and the Gold Coast are, so far, not facing any changes to their status but that could change.

“If there’s information that people have been, you know potentially infectious and in those areas, then we have to make that call as well,” Professor Sutton said.

Short “circuit-breaker” lockdowns have occurred in Melbourne, Adelaide, Perth, Brisbane and Auckland in New Zealand twice, but Professor Peter Collignon, an Infectious Diseases Physician and Microbiologist from the Australian National University, is critical of the move.

“I think short lockdowns have, so far, not really achieved much, wherever they’ve been happening in Australia,” he told Nine’s Today program on Tuesday morning.

“None of those lockdowns found any more contacts than … contact tracing. The average incubation period is five days. The reason we put people in hotel quarantine is 14 days because it can be after five days that you get infection.

The Victorian Health Department confirmed the state’s single active case of COVID-19 is a male airline crew member aged in his 30s. He remains in hotel quarantine.

International passenger flights will not resume into Victoria until April 8, but a number of quarantine hotels have remained open for flight crews accompanying cargo.

There were 12,892 tests processed in Victorian on Monday.