A catastrophic fire has engulfed the world-famous Notre Dame cathedral in Paris, France, toppling its spire and threatening the entire wooden frame of the building. French officials have said the fire may be linked to renovation work however the root cause of the blaze is not yet known and investigations are set to continue. Historic advisor Alastair Bruce explained to Sky News how the fire spread throughout the cathedral and why it proved difficult to combat fore firefighters.

“I think what is so tragic is it would have been built by medieval craftsman using wood that had been brought all the way to Paris.

“That wood would have been drying for centuries.

“Over that would have been the lead that held the roof and the rain out. 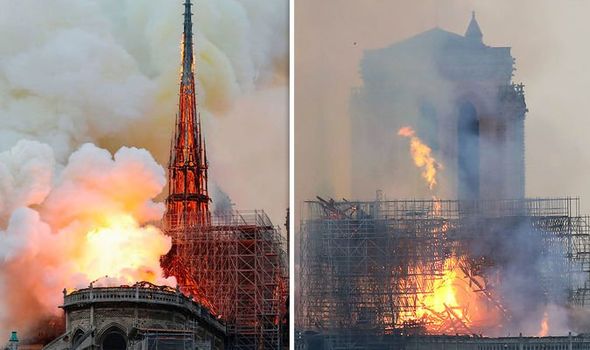 “Once the wood was alight and the lead was molting it is now presumed that it would burn for a long period of time I am sure.”

“They are all on wooden frames when you imagine about how this fire has moved.

“What I think is interesting is that those towers would have had substantial holding walls on all four sides and that could have prevented the fire from getting into them.

“All these old buildings depend upon thrust and lean going in many different directions and if you suddenly take out the main joist from that massive roof.

“I should imagine that the whole thing would be in some danger.”

“Emotion of a whole nation.

“Thought for all Catholics and for all French. Like all our countrymen, I’m sad tonight to see this part of us burn.”