Seoul: Just two days after announcing the discovery of a single asymptomatic case of the novel coronavirus, authorities in China's Kashgar area said they have tested 4.5 million residents, nearly the entire population.

By Monday evening, 164 asymptomatic cases had been found in the area. On Wednesday, authorities confirmed 22 more locally transmitted infections and 19 more asymptomatic cases in the far-western province of Xinjiang, where Kashgar is located. 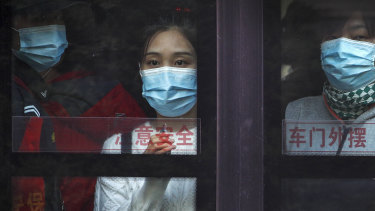 Commuters look out from a bus in Beijing on Monday. Schools and kindergartens have been suspended and communities are on lockdown in Kashgar, a city in China’s northwest Xinjiang region after a spate of cases.Credit:AP

The swift response by health authorities in the trade hub of 4.7 million people reflects the heavy pressures on local officials to quash the outbreak, the country's largest since the northern summer. Central government officials flew there during the weekend to monitor the testing.

Beijing is investing immense resources to control the spread of the virus, including millions of tests in response to even small clusters and the firing of local health officials deemed responsible.

In Kashgar, the rapid mobilisation of millions of people for coronavirus testing is occurring against an uncomfortable political backdrop. Over the past few years, authorities in Xinjiang have built up one of the world's most sophisticated surveillance networks. A heavy push to detain people deemed susceptible to religious extremism — which included those who resisted government rules — has left the population more compliant than most to official instructions.

Xinjiang health authorities said the first asymptomatic case in the Kashgar area was detected on Saturday and that 2.8 million residents had been tested by Sunday afternoon. By Monday evening, 4.5 million had been tested.

There were anecdotal reports out of Kashgar over the weekend of restrictions of movement.

"I was shooting a movie this afternoon in Kashgar's Old City, when we got the notice to put on our face masks and return to the hotel to await instructions," actor Li Chenhao wrote on the social network Weibo.

"Though there are indications now that the city is under lockdown," he wrote, "from my window I can see the nearby residential community going through nucleic acid testing in an orderly fashion."

Photos and video circulating on Weibo showed people lined up on Kashgar's streets, waiting to be tested at pop-up booths staffed by medical workers in white hazmat suits.

Kashgar schools have suspended classes through to Friday. A number of flights in and out of the area were cancelled.

Media offices of the regional and city governments did not respond to faxed requests for comment.

A similar testing campaign was carried out earlier this month in coastal Qingdao: Authorities ordered all 11 million residents to be tested after the discovery of a cluster of 12 cases, half of them symptomatic.

China has also raced to administer early doses of experimental vaccines, even though clinical tests have yet to be completed. This month, several cities in Zhejiang province – a business hub – began offering limited numbers of emergency COVID-19 vaccines to the public.

Vaccines were rolled out to hundreds of thousands in priority groups, which included the military, government officials and employees of state-owned enterprises.

The outbreak in Kashgar has been traced back to workers at a clothing factory in "No. 3 Village" in the area's Shufu County, according to the Beijing News. It's unclear how the virus got to the factory.

The first confirmed case was a 17-year-old girl whose parents worked at the factory, according to a news conference held by the Xinjiang health commission.

The outbreak draws further attention to an area that has faced intense international scrutiny this year. A number of Xinjiang clothing and textile factories were put under US sanctions in recent months, after reports that Muslim Uighurs — the predominant ethnic minority in the region — were being forced to work in factories under threat of detention.

Xinjiang's top leaders were put under US sanctions this year for human rights violations over a widespread political re-education and detention campaign targeting Uighurs.

Kashgar has been an important trade outpost on the Silk Road for centuries, and it continues to be a hub for trade between China and its neighbours in Central Asia and the Middle East. The city lies close to China's borders with Pakistan, Afghanistan, Kyrgyzstan and Tajikistan.

More than 2 million tourists visited Kashgar this month during the Golden Week holiday, according to official figures.

Xinjiang had a second-wave outbreak in July, which led to two months of lockdown in the region. The source of that outbreak has not been disclosed.