When Russia’s invasion of Ukraine began Olena Yukhymets opened the door of her home in the northern town of Zhytomyr to those fleeing the besieged capital Kyiv.

One of the guests was 12-year-old Artur Andreev. Alongside his grandparents they were part of an estimated two million people who evacuated the capital with just a suitcase of belongings. 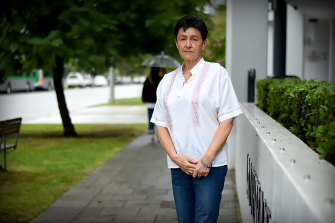 Olena Yukhymets is now living in Perth but said Ukrainians that have left the country and are now overseas feel that this is our duty to keep talking about the war.Credit:Cameron Myles

Olena has a picture the young boy drew depicting the war with Russia.

“The choice of colours clearly indicated the psychological pain the child is experiencing,” she said.

On February 24 Olena woke to the sound of explosions.

“I jumped in my bed and then my husband Volodymyr and I started monitoring the news,” she said.

“Russia was aggressively shelling and bombing Ukraine from all sides.”

It wasn’t the first time Olena and her family’s life had abruptly changed because of Russian aggression with president Vladimir Putin at the helm. 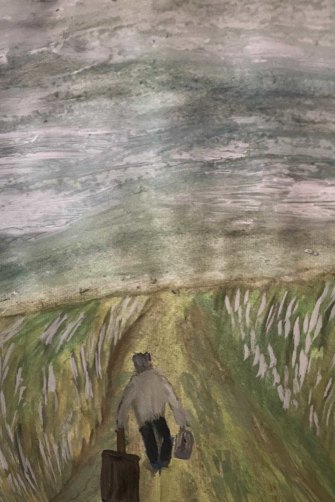 A painting by a 12-year-old Ukrainian boy.

In 2014 she left the eastern town of Donetsk, where she was a university lecturer in the history and international relations faculty.

For the past eight years, Ukrainian government forces have fought Russian occupying forces for control over much of the heavily industrialised regions of Donetsk and Luhansk, also known as the Donbas.

Olena said the trench war had ruined the area’s economy and forced millions like herself to relocate.

They moved to Ivano-Frankivsk, in Ukraine’s west, as far from the Russian border as possible.

Then in 2019 the couple bought a house in a peaceful agricultural village near Zhytomyr where they had many relatives.

“It was a big change from always living in an apartment in a large city, but we planted a garden and adopted three cats,” she said. 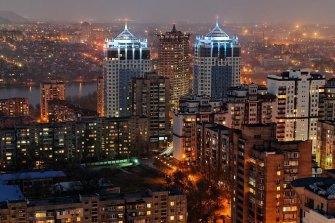 The view from Olena Yukhymets’ apartment building in pre-war Donetsk.

When war started once again on her doorstep in February, Olena and her husband had no intention of leaving their country.

“When people left Kyiv to head to the western border to reach Poland the highways were jammed,” she said.

“Our village was on the way so we opened the doors for people who we could help whether to stay for a night, a hot meal or just to rest.”

The Ukrainians are deeply proud of their nation.

“Ukrainians are peaceful people, but in times of danger we become warriors,” Olena said.

“We have come together as a nation to protect our motherland and its freedom from a brutal and inhumane enemy.”

But she feels a profound sense of humiliation at the basic rights Russia has taken away from her.

“It is impossible to overcome this feeling,” she said.

“We had night curfews. We had to cover the windows, we couldn’t turn on the lights because of the danger if the enemy could see even the slightest hint of light.

“It is winter in February, so we spent most of our time in full darkness.

“The air raid sirens go off throughout the night warning you to go to your basement. It was exhausting.”

Olena’s 90-year-old mother was unable to seek safety in the basement; the winter chill meant it was too cold down there and she was too frail to walk down the stairs.

When Russian missiles shelled the Zaporizhzhia plant – the biggest nuclear power plant in Europe – a week after the war began, Olena’s daughters pleaded with her to leave. 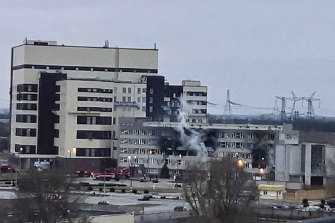 Zaporizhzhia nuclear plant – the largest in Europe – after it was attacked by Russian forces. Credit:AP

A neighbour fighting for Ukraine also warned them their area was in danger of occupation.

That night they decided to cross the border into Poland, which had opened its arms to Ukrainians seeking refuge.

“How do you pack up a life in two or three hours?” Olena said.

“We took our cats and some food because I knew there were long queues at the Polish border and it took people days to pass it.”

Olena said taking down the Ukrainian flag proudly flying outside her house was particularly painful. 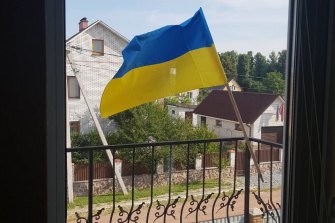 A Ukrainian flag once flew proudly outside Olena Yukhymets’ home in Zhytomyr.

“Knowing that the enemy can enter your house and take your flag away was distressing,” she said.

“When I unpacked my bag in Poland I saw I had brought all my flags and vyshyvankas – Ukrainian traditional embroidered shirts.

“These were definitely not the most essential items, but I couldn’t bear the thought of the enemy destroying our national symbols.” 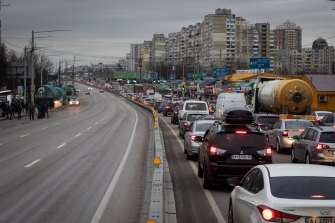 Truck drivers and residents seeking to leave the capital in a traffic jam in Kyiv in February. Credit:Erin Trieb / Bloomberg

Olena said her mum had never travelled abroad and now in her 90s, she had come to Perth with her.

“I am very grateful to the Australian government for granting us a visa and welcoming us and many other Ukrainians who have come here for safety,” she said.

But not all of her family is safe here in Australia.

Her father-in-law was reluctant to leave his home in Ukraine’s second-largest city of Kharkiv.

He is now in Zhytomyr with Olena’s husband. It is considered a “safe” place but really nowhere is safe in Ukraine, she said.

A school, hospital and industrial infrastructure have been destroyed in Zhytomyr. 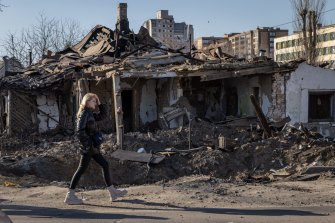 A woman walks past a rocket crater and a former home that was struck in a recent Russian attack in Zhytomyr, Ukraine.Credit:Getty

“Having spent months in the basements, they now ignore air raid sirens during the day and continue with their daily activities,” she said.

“They know they need to grow food. There are many people who have no access to shops and rely on volunteers to bring food and medicine.”

The oppression of her people at the hands of Russia spans generations of Olena’s family.

Her great-grandparents’ home and farmlands in southern Ukraine were taken away when the communists came to power a century ago and nationalised the land.

“With no land or means to support the family they came to the Donbas region to work on the mines,” she said.

“My grandmother, just 14 at the time, was forced to work underground in the mines which were up to 1000 metres deep.

“They were only allowed to go up once every two weeks.

“She hated those memories.”

Olena said the hatred for Russians was immense.

When Russia invaded Donbas and annexed Crimea in 2014, she ceased all contact with those she knew in Russia.

“There is word in Ukrainian for the strongest level of hatred – ‘l’ut’,” she said.

“But unfortunately the majority of Russians are incapable of hearing anything other than what the Kremlin-controlled media are telling them.

“They are under the influence of constant propaganda and they support the unfair war against Ukraine.” 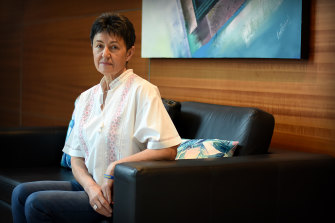 “Even though I am in Perth, this beautiful safe place, I can’t have pleasure because my heart is in Ukraine with my husband.” Credit:Cameron Myles

Olena said Ukrainian refugees felt a duty to tell the world about the war.

“Ukraine can’t stop this monster without the help of our international friends,” she said.

“We greatly appreciate military and humanitarian support, but as a country at war we still need more weapons to defend ourselves from this evil attack and to restore peace in our homeland.”

Olena remained optimistic Ukraine would triumph and that her motherland would be free again.

“To quote our President Volodymyr Zelensky, ‘Good will overcome evil and light will prevail over darkness’.”