Omicron could cause up to 10,000 hospitalisations PER DAY

Omicron variant could cause up to 10,000 hospitalisations PER DAY and ‘very substantially overwhelm the NHS’, warns Professor Lockdown

The Omicron variant could ‘substantially overwhelm’ the NHS and cause up to 10,000 hospitalisations a day, according to ‘Professor Lockdown’ Neil Ferguson.

The Government scientist, whose modelling spooked Number 10 into ordering the original coronavirus lockdown last March, said was the UK was experiencing a ‘very explosive wave of infection’ because of the new variant.

As a result, he said it could lead to ‘quite an explosive wave of hospitalisations’, the scientist told The Guardian.

‘Unfortunately, most of the projections we have right now are that the Omicron wave could very substantially overwhelm the NHS, getting up to peak levels of admissions of 10,000 people per day,’ he said.

The scientist added that the figure could be reached ‘sometime in January’, but said that the resultant deaths figure was harder to predict.

Professor Ferguson’s prediction is ten times higher than the one made by the Government’s SAGE panel of experts for early in the New Year.

The frightening figure of 10,000 hospitalisations a day is a little more than double the current highest figure, which was 4,582 on January 12 this year.

Professor Ferguson’s latest warning comes just three days after he said that a new new national lockdown could be on the cards to tackle Omicron.

He told the BBC Radio 4 Today programme on Wednesday: ‘There is a rationale, just epidemiologically, to try and slow this down, to buy us more time principally to get boosters into people’s arms because we do think people who are boosted will have the best level of protection possible, but also to buy us more time to really better characterise the threat.’

As the Government’s Plan B measures were announced last week, Health Secretary Sajid Javid warned that Omicron cases could reach 1million by the end of this month.

And on Friday, new official data suggested that as many as 4,000 Britons could be catching Omicron every day, with the super-variant on track to replace Delta in a matter of days.

An additional 448 confirmed cases of the Omicron variant have been reported across the UK, bringing the total number to 1,265. 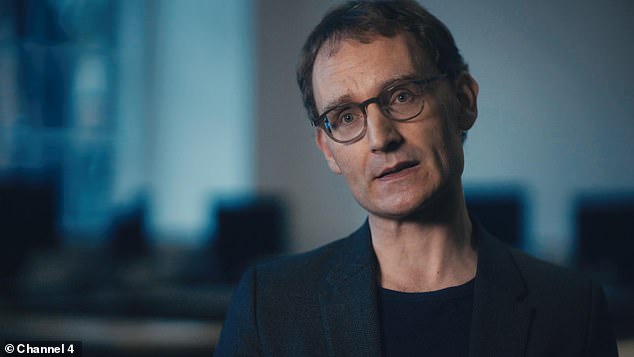 The Omicron variant could ‘substantially overwhelm’ the NHS and cause up to 10,000 hospitalisations a day, according to ‘Professor Lockdown’ Neil Ferguson 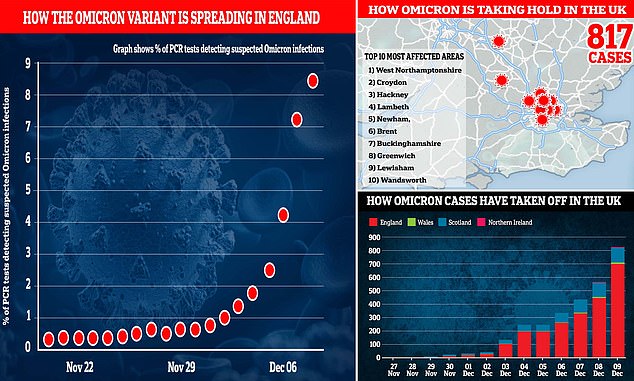 Confidential UK Health Security Agency data showed that Omicron may now be behind 8.5 per cent of infections

The highly-evolved Omicron variant is now behind 8.5 per cent of coronavirus cases in England 13.3 per cent north of the border and cases are doubling every two or three days.

With an average 48,000 Britons testing positive for Covid every day, it suggests more than 4,000 of them are the new Omicron variant — even though fewer than 1,000 cases have been confirmed.

Scotland, which along with London has become one of the UK’s Omicron hotspots, today reported 5,018 positive Covid tests, which is the highest number in three months and double the number a week ago.

First Minister Nicola Sturgeon told Scots on Friday to brace for a ‘tsunami’ of infections, as she warned the new super-variant posed a ‘severe challenge’.

At a press conference in Edinburgh, she said: ‘The fact is we do face a renewed and very severe challenge in the face of the new Omicron variant. To be blunt, because of the much greater and faster transmissibility of this new variant, we may be facing – indeed we may be starting to experience – a potential tsunami of infections.’

Public health chiefs expect Omicron to outstrip Delta nationally by Christmas and even sooner in the epicentre of London, with its rapid spread prompting No10 to resort to its Plan B strategy.

But Ms Sturgeon believes the variant to become dominant much more rapidly north of the border, adding: ‘I think we can now say with some confidence that we expect it to overtake Delta within days, not weeks – we estimate this could be as early as the very beginning of next week.’

Public Health Scotland projections estimate that Omicron will be dominant by Tuesday and will make up virtually every infection by December 20.

A senior member of the Government’s scientific advisory group SAGE warned on Thursday that Omicron was spreading even faster in the UK than it is in South Africa — where cases have rocketed 10-fold in a fortnight.

The UK Government hopes Plan B restrictions will be enough to slow the spread of the mutant strain, buying the NHS precious time to dish out millions more booster jabs. 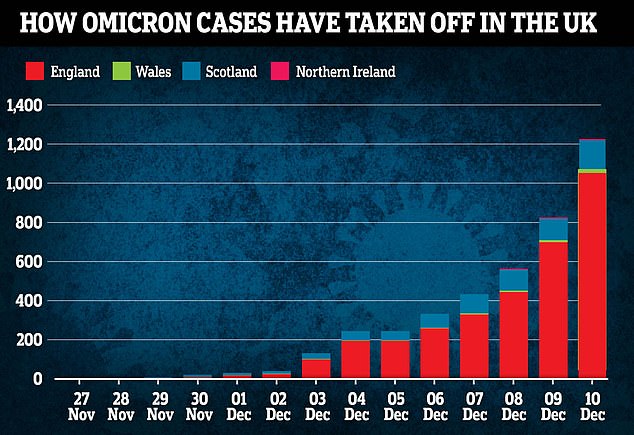 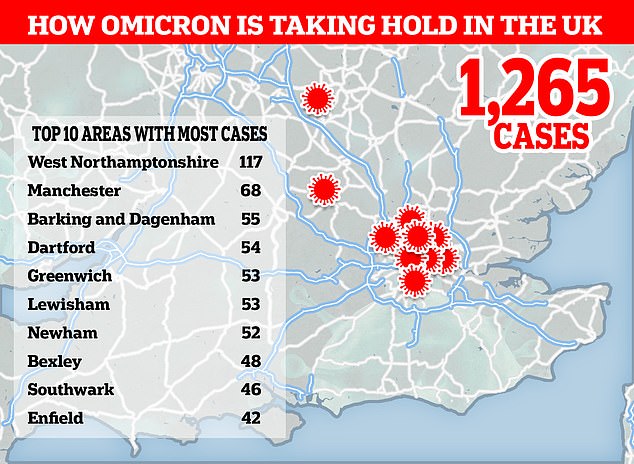 The above map shows the ten areas that have the most confirmed and suspected Omicron cases in England, according to the UK Health Security Agency. West Northamptonshire is the country’s hotspot for the mutant strain, although eight in ten areas on the list are in London

The first part of Boris Johnson’s Plan B came into force in England on Friday, with the introduction of compulsory face masks in indoor settings such as theatres, cinemas and churches.

New work-from-home guidance will come into effect on Monday, and MPs will vote the next day on the introduction of vaccine passports for nightclubs and large venues.

But officials are already drawing up a ‘Plan C’, which would see care homes slapped with fresh restrictions in the run up to Christmas and masks made compulsory in pubs and restaurants.

Controversial vaccine passports could also be extended to more venues as part of contingency measures being floated within Downing Street if Omicron proves to be as dangerous as scientists fear.

According to confidential data given to ministers that underlines the severity of the situation faces in the run-up to Christmas, Omicron already makes up 30 per cent of new Covid cases in London.

On Friday, Communities Secretary Michael Gove, who is isolating after testing positive himself, warned the current crisis was ‘deeply concerning’, naming London and Scotland as hotspots.

He described the latest data presented to the devolved nations as ‘very challenging new information’.

Stark projections show the super-mutant variant could become dominant within days, prompting concerns that Boris Johnson will have no choice but to hit the panic button once more. 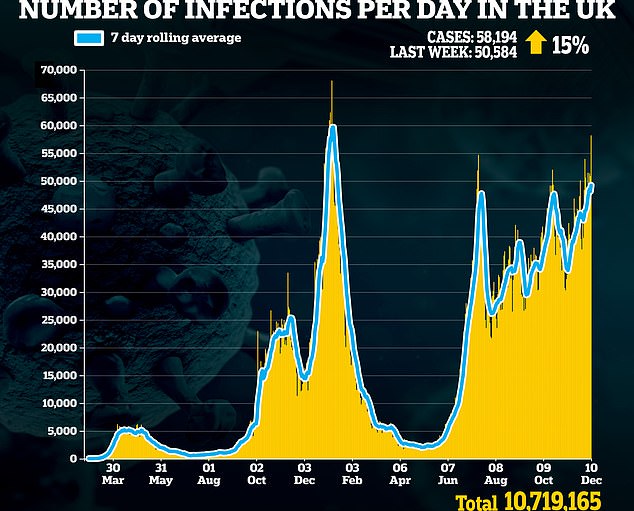 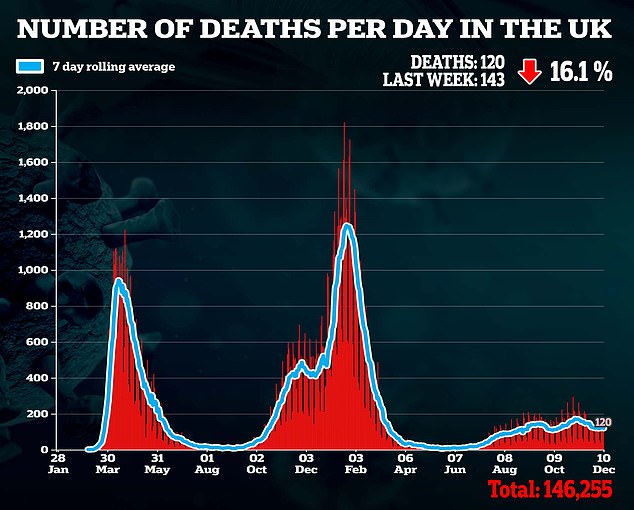 All of London’s 32 boroughs are seeing cases tick upwards, and Omicron has been found in every corner of the city.

Hospitalisations and deaths in the capital remain flat but both measures lag behind by several weeks because of how long it can take for someone who has caught the virus to become seriously unwell.

Public health chiefs in the capital say they are taking the new threat ‘extremely seriously’, and that it could take over in the city in as little as two weeks.

Last week, Professor Ferguson was asked on the BBC if a lockdown could be reimposed.

He said: ‘Clearly if the consensus is it’s highly likely that the NHS is overwhelmed then it will be for the Government to decide what to do about that but it’s a difficult situation to be in of course. It certainly might be possible at the current time.’ 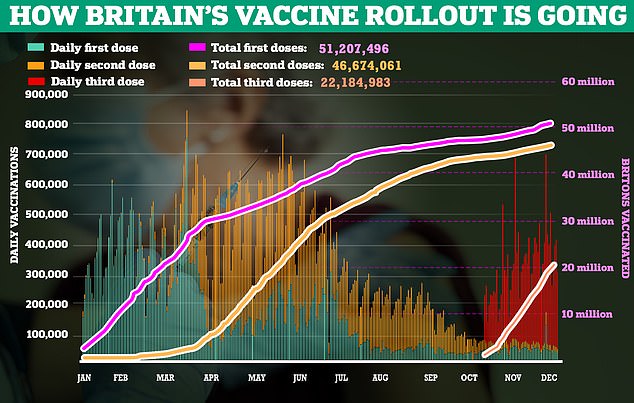 Professor Ferguson said light measures like WFH ‘wouldn’t stop’ Omicron but ‘could slow it down’ and buy the country precious time, extending the doubling time to five or six days.

‘That doesn’t seem like a lot, but it actually is potentially a lot in terms of allowing us to characterise this virus better and boost population immunity,’ he added.

The Imperial College London scientist said that while Omicron was concerning, it is

still unclear what impact it will have on severe disease, hospitalisations and deaths. The first lab study of the super-variant in South Africa on Tuesday found that people given two doses of Pfizer’s vaccine produce forty times less antibodies when exposed to Omicron.

Professor Ferguson said the finding suggests Omicron will cut the effectiveness of current vaccines on mild disease in half, but he said they should still hold up against severe illness.