One million Britons care for children AND their elderly parents

A generation of parents who provide for their children at the same time as caring for their own parents are showing warning signals of mental ill-health, official analysis revealed yesterday.

The report, by the Office for National Statistics (ONS), said that more than a quarter of the 1.3million people in the ‘sandwich generation’ – who have to look after both the young and the elderly in their family – are now suffering because of the strain.

They are unhappier than other people and also more likely to have to deal with financial pressure because of the difficulties of combining long hours of family care with a job, the report said. 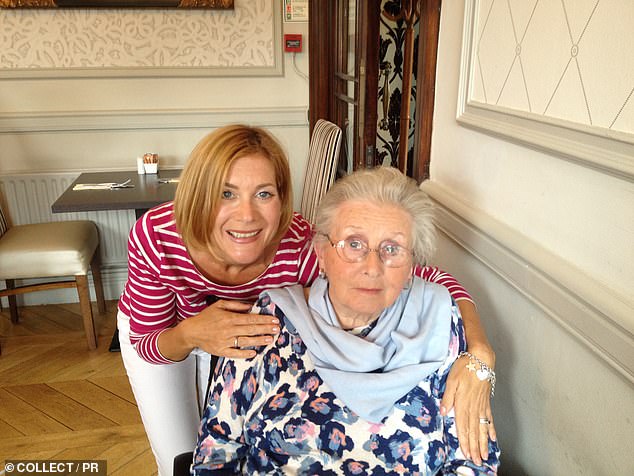 Alana Kirk (left) believed she could manage to look after a baby, two toddlers, her sick mother (right) and her vulnerable, housebound father

It is the first to establish the scale of the phenomenon, a growing reality for parents whose own parents are likely to be long-lived. Those affected are mainly aged between 35 and 55; nearly three quarters have jobs or run businesses and more than half have mortgages.

‘I thought I’d cope but I had a breakdown’

Alana Kirk believed she could manage to look after a baby, two toddlers, her sick mother and her vulnerable, housebound father.

Then one day the author found herself at the side of a road with her baby, tempted to step out into the traffic.

‘For many months I pretended all was fine,’ she said. ‘Perhaps inevitably, I suffered a complete breakdown, and was forced to seek medical help.’

Mrs Kirk suffered her breakdown after the birth of her youngest child Ruby, in 2010. She had been hoping her mother Pat – then 76 – would help her juggle work and childcare.

However, Pat had a stroke that left her needing 24-hour care and Mrs Kirk found herself sandwiched between looking after her children and her parents, until her mother died in 2016.

Mrs Kirk told the Mail: ‘My GP explained I was suffering post-traumatic stress and exhaustion, with some post-natal depression thrown in.’

The majority, just over six out of ten of the parents who do ‘sandwich caring’, are mothers, said the ONS.

It added: ‘With life expectancy increasing and women having their first child at an older age, around three per cent of the population, equivalent to more than 1.3 million people, now have this twin responsibility.’ Hugh Stickland of the ONS said: ‘More people across the UK may soon find that they are part of a new sandwich generation.’

The report, based on large-scale official surveys, found that 27 per cent of sandwich carers have symptoms of ‘mild to moderate’ mental ill-health, including anxiety or depression. That compares with 22 per cent of the general population. Problems increase with the amount of time spent caring for sick or ageing parents.

Among those who spend more than 20 hours a week looking after their parents, 33 per cent show symptoms of mental health difficulties. Carers who devote between ten and 19 hours are week to caring for relatives reported nearly 20 per cent lower satisfaction with life than the average, and nearly 15 per cent less satisfaction with their own health. On the other hand, those who spend four hours or less a week looking after parents actually feel more satisfied with their lives and health than the average.

Niall Campbell, consultant psychiatrist at the Priory Hospital in Roehampton, South-west London, said: ‘The sandwich generation really has it rough and there is almost nothing more emotionally draining or guilt-inducing than looking after ageing parents and raising children while trying to keep a job going.

‘Women, and it is mostly women, are carrying enormous physical and mental burdens and we see them coming to Priory with burnout.

‘They are increasingly self-medicating with alcohol, and display feelings of helplessness with no obvious respite.’