Our right to the truth 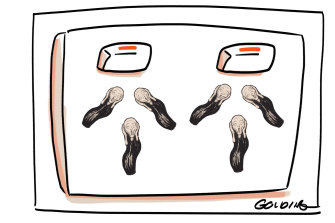 Our right to the truth

The UK government has approved the extradition of Julian Assange to the US (The Age, 18/6) where he will likely die in a high-security prison. Meanwhile our government sits on its hands, despite pre-election promises to act.

Will the US get its way and “eliminate” an Australian crusader journalist who exposed its brutal war crimes? And at what cost to free speech? The Albanese government must act. If Assange dies in an American cell, our basic right for the truth dies with him.
Kim Stacey, Black Rock

Anthony Albanese, please negotiate to bring Assange home to Australia. His future in the US is dire. He is being tormented by the UK and US like a mouse by two cats.
Leigh Ackland, Deepdene

Suitable for animals only

Every time I see a puffer jacket (Sunday Age, 12/6), I am reminded of the creatures which suffered and died to provide the down and feathers. And discarded puffers are clogging landfill.

Long-sleeved thermals and long johns are preferable. They last for many years if they are washed according to instructions and they give wearers a slimmer profile. As with fur, feathers and down look their finest on our precious animals rather than prancing humans.
Jan Kendall, Mount Martha

Tony Wright reveals that he has been “Sanctioned. Put on a list. Banned from entering Russia” (The Age, 18/6). Anyone who bans Tony is not a friend of mine.
Andrew Barnes, Ringwood

Build up our reserves

David Crowe’s piece on the energy car crash (Comment, 17/6) missed one crucial element. How the east-coast gas cartel is allowed to gouge customers by forcing us to pay huge prices for our own gas as we compete with the export market.

We cannot bring renewables or storage online fast enough but we can force gas reservation. Yes, the gas companies will have a massive sook, but the political capital from domestic gas and electricity prices crashing will see Labor be a three-term government.

Failure to force reservation will see Anthony Albanese be a single-term prime minister, or get knifed as the opinion polls turn.
Kieran Simpson, Blackburn North

The SEC’s give and take

Apart from dismay at its privatisation, I have a fond memory of the SEC. On one occasion our half-yearly bill showed a refund for an overcharged amount of £3.16.3

Six months later the same thing happened, but we pointed out the error and paid the full amount. This little circus continued – for three and a half years. Just when we jokingly thought we had kept the discount, it stopped.
Lorraine James, Burwood

The citizen science piece by Miki Perkins (The Age, 18/6) shows the dangers of cooking with gas. It is also far more expensive for home heating than electric heat pumps.

It is interesting that the wage rise for the lowest-paid workers is dangerous because it will fuel inflation and cause unemployment.

Even more interesting is that salary increases for MPs, executives, senior managers, those who get substantial bonuses, and other highly paid individuals have no impact on inflation or unemployment.
Wendy Logan, Croydon North

Re the “jobs purge” at the Justice Department (The Age, 18/6). Evidence of Victoria’s public service being bent to the will of an egotistical premier echoes the situation federally that encouraged me to vote against the Coalition.

If the major parties do not want independents to grow in strength, they need to hear the growing scream for integrity and fairness in government and against hyper-partisanship, personal ambition and ego. Nothing is more important for democracy.

I am looking for an independent at the next state election because neither major party realises they are not ruling for themselves and their cronies.
Michael Langford, Ivanhoe

The need for an investigation into the Justice Department purge pinpoints how much we have gone backwards since 1883.

Following the fatal train accident near Hawthorn in 1882, the Colony of Victoria passed legislation to establish an independent public service board designed to stamp out widespread patronage in the public service. Sadly, the board is no more.
Chris Walker-Cook, Geelong West

Re “Language is literally changing all the time” (Comment, 15/6). I could literally spit chips when told something is very unique. Unique means the only one of its kind. If there are more than one, then they are very rare.
Nina Dow, Wantirna

In relation to Ellis Gunn’s article – “I was stalked” (Sunday Life, 12/6). As a father, I have taught my two daughters two words to deal with unwanted attention from male strangers: “F— off”.
Andrew Pupillo, Northcote

The lettuce said it’s so

Why is lettuce so expensive? Cos.
Robin Jensen, Castlemaine