We have made our live blog of the coronavirus pandemic free for all readers. Please consider supporting our journalism with a subscription.

Some predictable responses will play out in Victoria’s fourth lockdown. Masks will return as everyday wear, and the CBD will go back to its state of abandonment. The rush on toilet paper has already forced supermarkets to limit purchases.

Some even predicted what Victoria is now facing. James McCaw, an epidemiologist with the University of Melbourne who is leading a team providing modelling on the pandemic to the federal government, said three weeks ago that the risk of a major outbreak was at the highest level since the pandemic began. 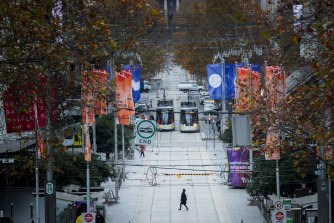 A very quiet Bourke street in the CBD on the first day of the snap lockdown. Photo by Jason South.Credit:Jason South

Professor McCaw believed it was “absolutely inevitable” that COVID-19 would spread again within Australia. Despite all the improvements to hotel quarantine and contact tracing, the influx of more infectious variants of the virus and the increased frequency of socialising brought on by fewer restrictions had significantly heightened the chances of a new outbreak.

With so many predictable features to this outbreak, it raises the question: why was the state government not more prepared?

This lockdown will be yet another blow to thousands of businesses shutting up shop for at least another week. The Australian Industry Group says Victorian businesses will suffer a $1 billion direct hit from the lockdown, with another $1.5 billion in indirect costs.

And yet, when acting Premier James Merlino pulled the trigger on Thursday, it was clear his government had no prepared game plan for how to assist businesses and those they employ. Mr Merlino said on Friday the state Treasurer, Tim Pallas, was in discussions with his federal counterpart, Josh Frydenberg, trying to put together a relief package.

But his response that it would be announced “in coming days” fell far short of expectations. If helping those most hurt financially by the lockdowns was not a high priority in the contingency planning for the next outbreak, you have to ask: what would be?

Also not adequately implemented was a QR code system that was state wide, reliable and whose use was enforced. This has meant that contact tracers looking for people at some of our 130 exposure sites must do so the old-fashioned way, which is time-consuming and inexact. Strike two for the state government.

The meltdown of the vaccination hotline under the weight of people aged 40 to 49 seeking their Pfizer shot was also, perhaps, predictable. Some callers reported they had been left on hold for hours, while others said they were unable to get through to book their vaccine appointment.

That said, it should be noted that not all those responding to the outbreak were caught off guard.

For much of the outbreaks and lockdowns last year, it was obvious that the state’s contact tracing efforts were below par. That is no longer the case. Within 24 hours of the latest positive cases, more than 10,000 people had been identified as being potentially exposed to the virus, and the speed at which exposure sites were identified and communicated has been impressive.

Also on the much-improved list would be the state’s capacity to test for COVID-19. On Thursday, more than 47,000 people fronted up, many thousands more than the previous record. The vast majority of results were handed back to people by the next day. That does not happen by chance. It shows Victoria now has a system ready to ramp up.

Even if the number of people getting vaccinated were to stay at the higher rates we are now seeing, it would probably take until the end of the year before most received at least one dose. That means, even if this outbreak is shortlived, it will be many months before we can begin to let our guard down again.

Victoria is still getting things wrong, but much more of its response has been right this time. There is, however, further work to be done. The shortcomings of this week’s response should be studied and improved upon because, as is now clear, this virus is not going anywhere.

The Age’s editor Gay Alcorn writes an exclusive newsletter for subscribers on the week’s most important stories and issues. Sign up here to receive it every Friday.