Pictured: Hero father who died after saving three of his children

Pictured: Hero father who died after saving three of his children when they got caught in rip tide off Welsh beach as his ‘devastated’ partner pays tribute to him for ‘bringing our babies back’

A father-of-seven died while rescuing three of his children when they got caught in a rip tide during a family trip to the seaside.

Jonathan ‘Joff’ Stevens, 36, was with the youngsters aged ten to 12 at Barmouth in North Wales when they began to struggle in the water yesterday lunchtime.

The plasterer tried to pull the children to safety, and a major rescue operation was launched involving a lifeboat and Coastguard search and rescue helicopter.

Mr Stevens, from Telford, Shropshire, was then pulled from the water and flown to Gwynedd Hospital in Bangor in an air ambulance but died.

Today, his heartbroken partner Laura Burford, who was back home 80 miles away when the tragedy happened, said he had died a hero while ‘saving their babies’. 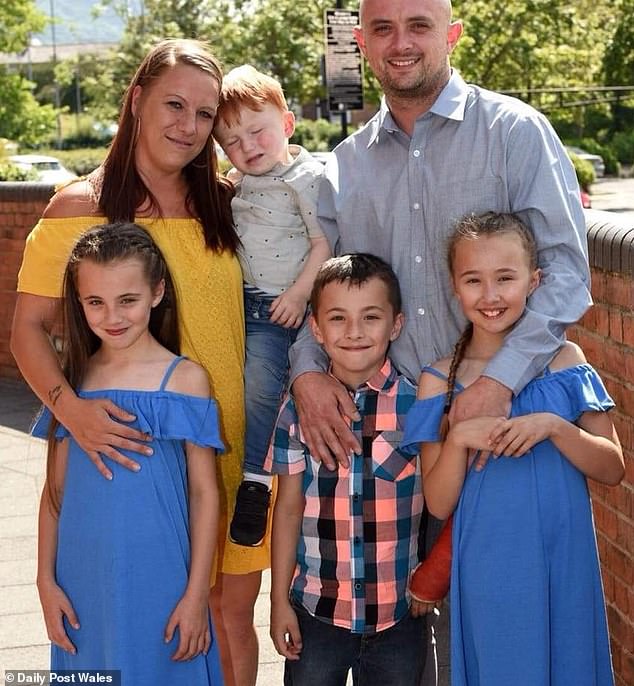 Jonathan Stevens is pictured with his partner Laura Burford and four of their children – including Lacey (bottom right) and Jack (bottom centre), whom he rescued yesterday 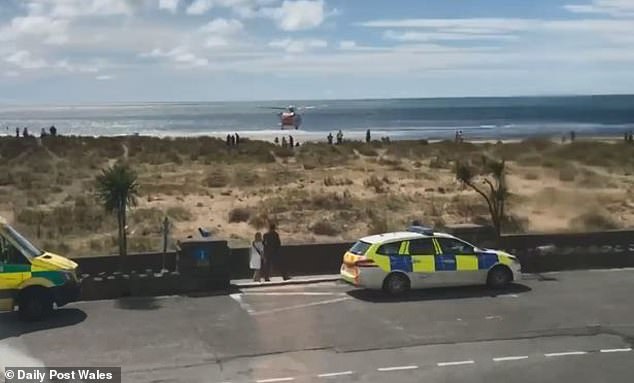 She said: ‘I am absolutely devastated to say that I have lost the complete love of my life. All seven of his beautiful kids have lost their dad.

‘He died saving his kids’ lives in the sea. There are no words to describe the pain. I will always be grateful to (him) for bringing our babies back. I love him, always have, and always will.’

A GoFundMe page aiming to raise £2.000 has been set up to support Ms Burford and the children by friend Mel Plowman, who described Mr Stevens as a ‘true hero’.

A North Wales Police spokesman said: ‘Police and the Coastguard were called at 1.58pm on Sunday to a report that a man had got into difficulty in the sea in Barmouth.

‘The man was taken by air ambulance to Ysbyty Gwynedd (Gwynedd Hospital), where he tragically died.’ 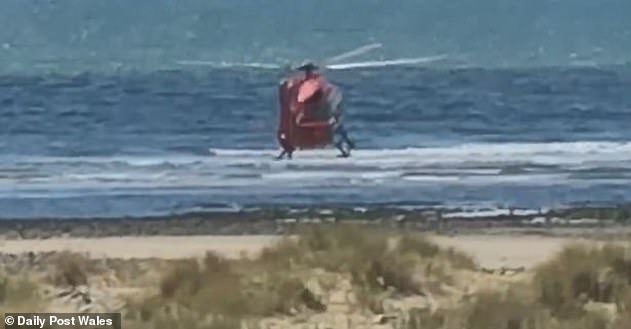 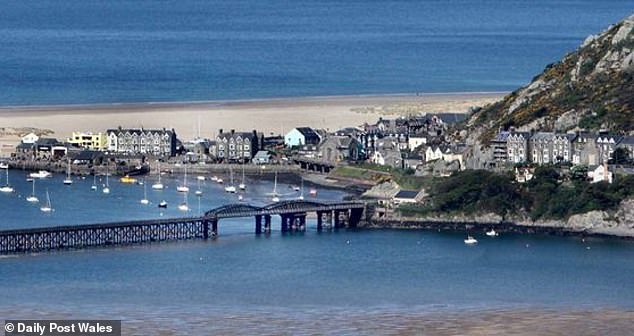 Local authorities have warned beaches are becoming ‘unmanageable’ due to large swathes of visitors, prompting fears around keeping people safe in the water.

The Coastguard had its busiest day for more than four years last Friday – when the UK recorded its third hottest day ever – as it dealt with more than 300 incidents.

Thanet District Council asked people to avoid four of the area’s beaches, including Margate’s Main Sands, due to the number of visitors.

Daytrippers flocked to beaches across the country on Friday, sparking concerns about how sunseekers would keep to social-distancing measures.

Many calls to the Coastguard on Friday were about people being cut off by the tide, missing children and swimmers getting into difficulty.

The Coastguard said the total number of UK incidents was 329, including 232 callouts for coastguard rescue teams, 129 for lifeboats, 22 requiring aircraft and three for a hovercraft.

The coast along Essex and Kent saw a total of 45 incidents, it added.

‘Barmouth harbour master and the Coastguard rescue helicopter and helimed also attended. A male casualty was recovered from the water and transferred to Ysbyty Gwynedd in a serious condition.’

And a spokesman for the Welsh Ambulance Service said: ‘We were called at 1.39pm to reports of persons caught in a rip tide at Barmouth beach.

‘We sent two rapid response cars and two emergency ambulances to the scene where crews were also supported by a Wales Air Ambulance and a search and rescue helicopter.

The Maritime and Coastguard Agency said teams had been busy dealing with multiple search and rescue incidents across the Welsh coast on Sunday.

Along with the incident in Barmouth, it said the Abersoch Coastguard Rescue Team was called to help three people in the water at Hell’s Mouth.

The casualties were said to be suffering from suspected hypothermia and were given medical care, the agency said.

Meanwhile, Aberdovey Coastguard Rescue Team was called at 2.45pm to reports of three people in the water at Aberdovey, resulting in one man being taken to hospital.

On Saturday a man in his 40s died after being pulled from the sea at Pedn Vounder Beach, near Porthcurno, in west Cornwall.

In Brighton, a search operation for a kayaker who was reported missing off the East Sussex coast was suspended last night.

HM Coastguard said a person had been seen ‘going into the water’ from a kayak off Hove Lagoon yesterday morning.

A kayak and paddle were later found on the shoreline in the area. The coastguard said last night the search had since been suspended ‘pending further information’.

It comes after local authorities warned beaches are becoming ‘unmanageable’ due to large swathes of visitors, prompting fears around keeping people safe in the water.

The Coastguard had its busiest day for more than four years last Friday – when the UK recorded its third hottest day ever – as it dealt with more than 300 incidents.