Police break up Hong Kong memorial to mark 33rd anniversary of Tiananmen Square massacre after BANNING memorial for up to 10,000 killed by Chinese Communist soldiers

Police in Hong Kong dispersed crowds marking the anniversary of the Tiananmen Square student protest, where up to 10,000 civilians perished in 1989.

Mention of the violent student suppression, which came 33 years ago today, has been illegal in Hong Kong since Beijing tightened its grip on the territory in 2020.

Many leaders of vigil organisers the Hong Kong Alliance in Support of Patriotic Democratic Movements of China are currently locked up.

And cops shut Victoria Park, the city centre public square where thousands of Hongkongers used to commemorate the event. 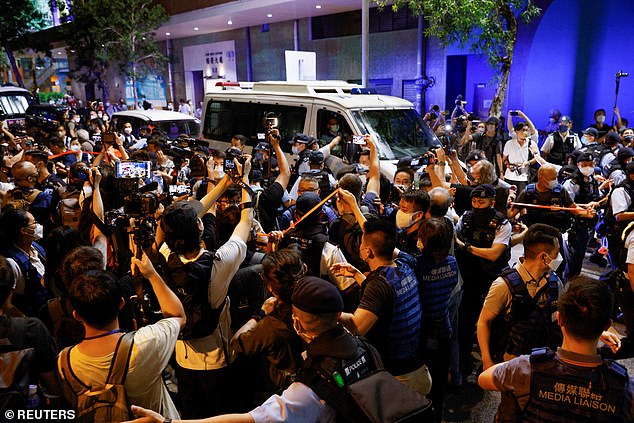 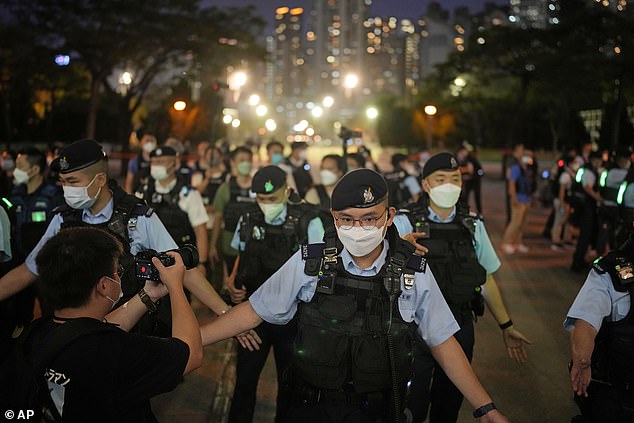 China justified the protest ban as a Covid prevention measure.

Hong Kong puppet leader Carrie Lam said this week any events to commemorate those killed in the 1989 suppression would be subject to national security laws.

Around 30 people met in Kowloon, northern Hong Kong to pray for those ‘who died for justice’ in 1989.

That’s despite the local Catholic church cancelling services which were set to mark the massacre, the FT reported. 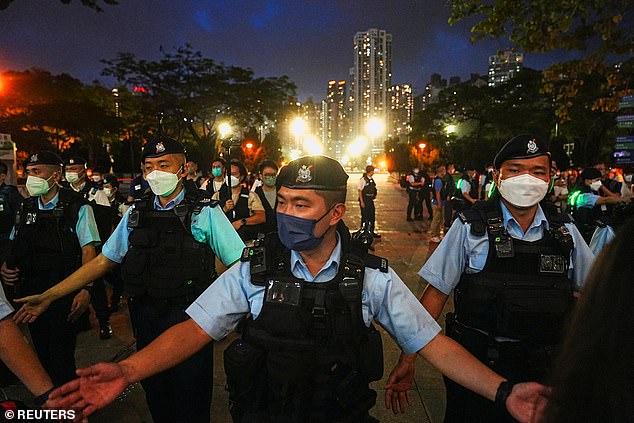 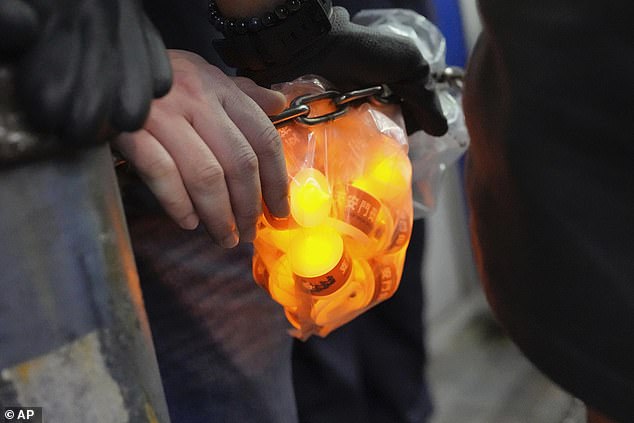 One congregant told the newspaper: ‘Public memorials may be gone this year, but what I remember in my heart, you cannot make it disappear.’

Last month a church leader and ex-opposition activist was arrested in Hong Kong on charges of ‘colluding with foreign forces’.

Numerous statues and public memorials to mark Tiananmen Square have been dismantled in Hong Kong since Beijing’s crackdown was completed last year.

‘If nobody remembers, the suffering of the people will never stop and the perpetrators will continue their crimes with impunity.’

‘But we believe that such brute force cannot erase people’s memories,’ she posted on her Facebook and Instagram pages. 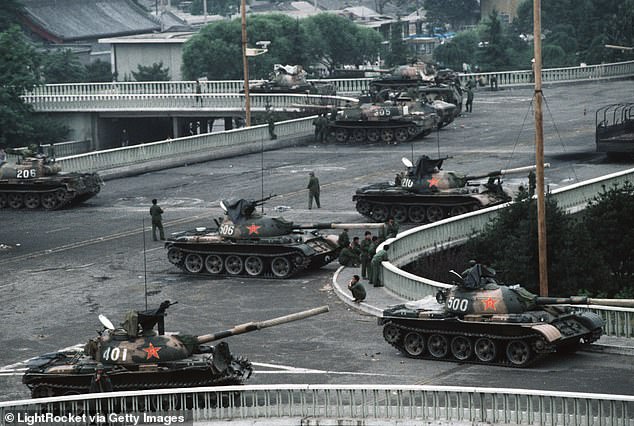 U.S. Secretary of State Antony Blinken called the Tiananmen crackdown ‘a brutal assault,’ adding in a statement: ‘The efforts of these brave individuals will not be forgotten.’

A wave of protests in 2020 failed to quash China’s National Security Law (NSL), the mandate on which the state has since imprisoned hundreds of dissenting activists.

It is widely seen as a crackdown on the rights of Hongkongers and a betrayal of the ‘one country, two systems’ principle in place since the island city returned to Chinese control in 1997.

The principle was intended to protect Hong Kong’s independence for 50 years – till 2047 – plus its right to an independent judiciary. 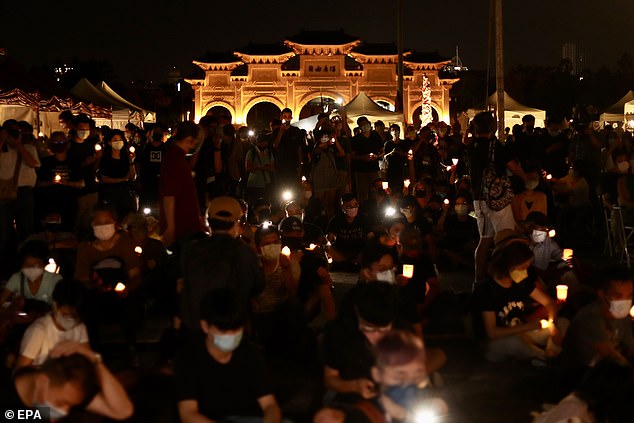 Crowds gathered at Liberty Square in Taipei, Taiwan in the early hours of this morning 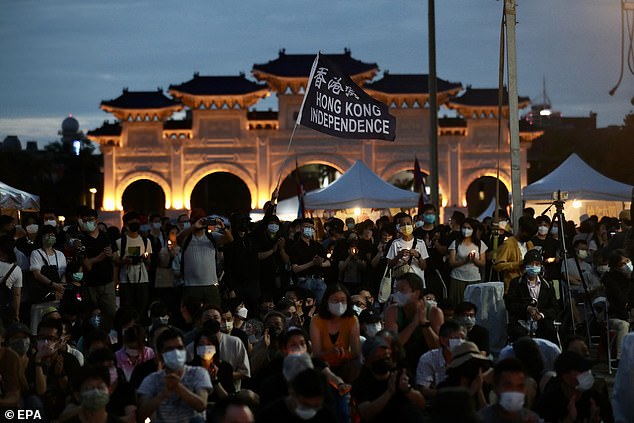 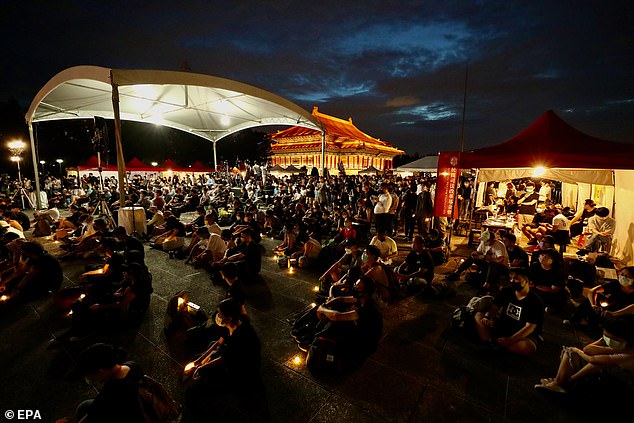 Yet under the 2021 law, the crime of ‘collusion with foreign forces’ is punishable by a maximum sentence of life in prison.

Cases can be sent to the mainland for trial, raising doubts about the independence and fairness of any trial held there.

‘The Chinese government has long ago come to a clear conclusion about the political incident that happened in late 1980s,’ he said.

The arrest of the cardinal came after China appointed the ex-security chief who oversaw the crackdown as the region’s new leader.

John Lee, 64, was the only candidate in the Beijing-backed race to succeed outgoing leader Carrie Lam last month.

The elevation of Lee, who is currently subject to US sanctions, places a security official in the top job for the first time amid a tumultuous few years for a city battered by political unrest and debilitating pandemic controls.

Despite the city’s mini-constitution promising universal suffrage, Hong Kong has never been a democracy, the source of years of public frustration and protests since the 1997 handover to China.

Its leader is instead chosen by an ‘election committee’ currently comprised of 1,461 people – roughly 0.02 percent of the city’s population.

After a brief secret ballot in May, 99 per cent of those who cast ballots (1,416 members) voted for Lee.

Only eight voted against, officials said.