Police return to the crime scene of underworld figure shooting

Police have returned to the scene of the drive-by shooting of the brother of notorious gangland identity Bassam Hamzy to conduct further inquiries into the killing in Sydney's south-west.

Officers did a secondary canvass of the crime scene on Tuesday and have renewed their appeal to the public for any information in relation to the shooting. 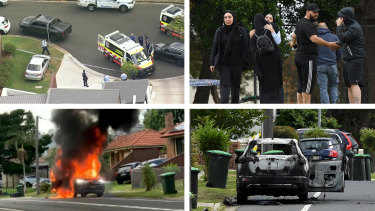 "As investigations continue, police are urging anyone with information, or who may have dashcam footage from the Condell Park area between 6am and 8am on Monday 19 October 2020, to come forward."

Certain members and associates from rival gangs were banned from several locations around Sydney’s west and east over the weekend, as police attempted to stop retaliation.

"This behaviour has got to stop, and we are absolutely sick of it," Commander Detective Superintendent Robert Critchlow said. "We're going through the front doors of houses all across Sydney, every other day and night at the moment.

"We will continue to fight this fight, and we will win."

Mr Critchlow said the police investigation into Mr Hamzy's Condell Park death was ongoing, but there was evidence several firearms had been used in the shooting.

He said several stray bullets hit nearby cars and homes and could have killed "innocent members of the public".

On Tuesday morning, police arrested a man and seized a pistol at a home in Market Street, Condell Park, as part of their investigations. The 25-year-old man was taken to Bankstown Police Station where charges are expected to be laid.