A PROTESTER was pictured facing down a cop with a rubber bullet gun while a young child was on his shoulders.

The image, taken at a Long Beach demonstration, was described as “the most impactful picture I have ever taken,” by the photographer. 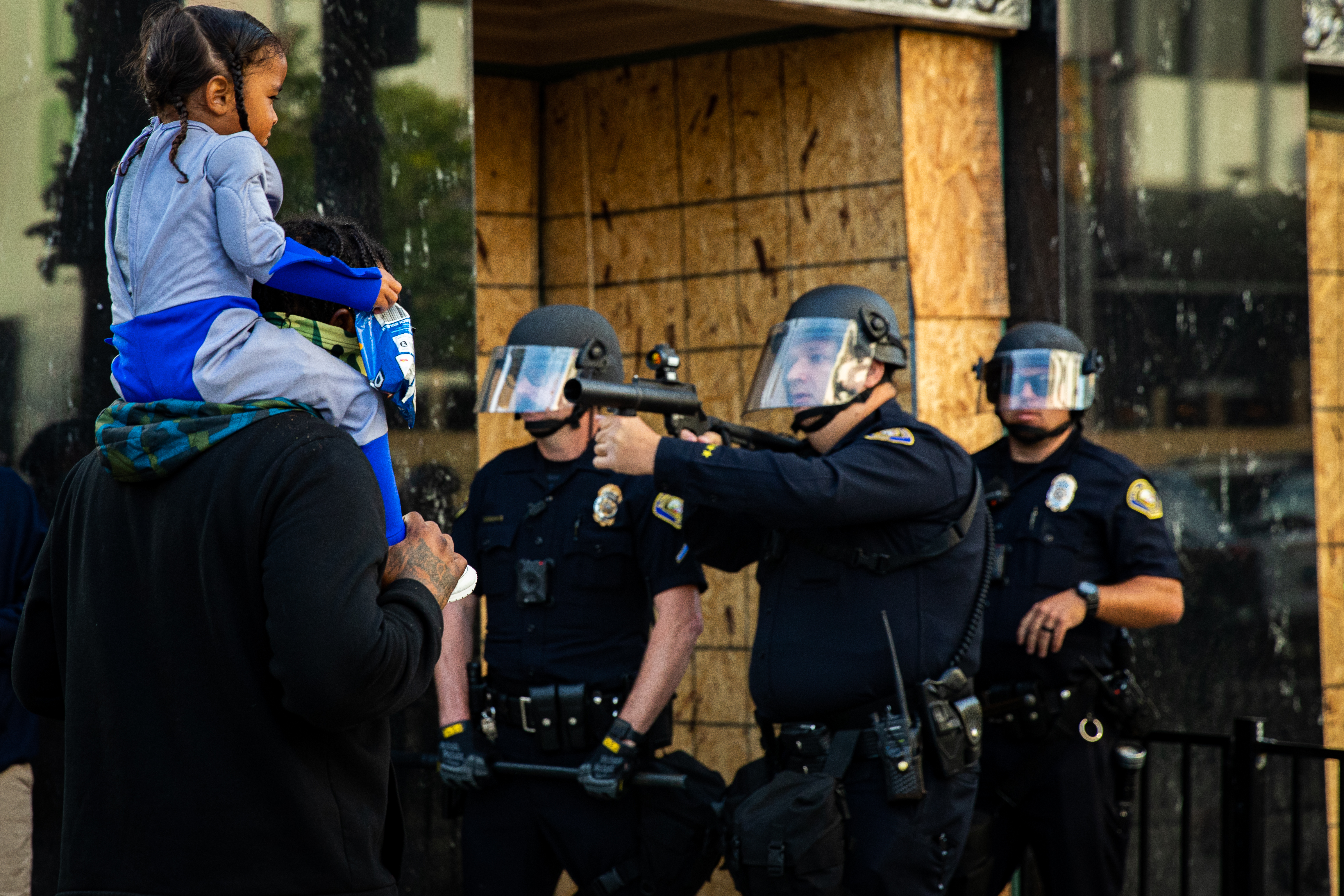 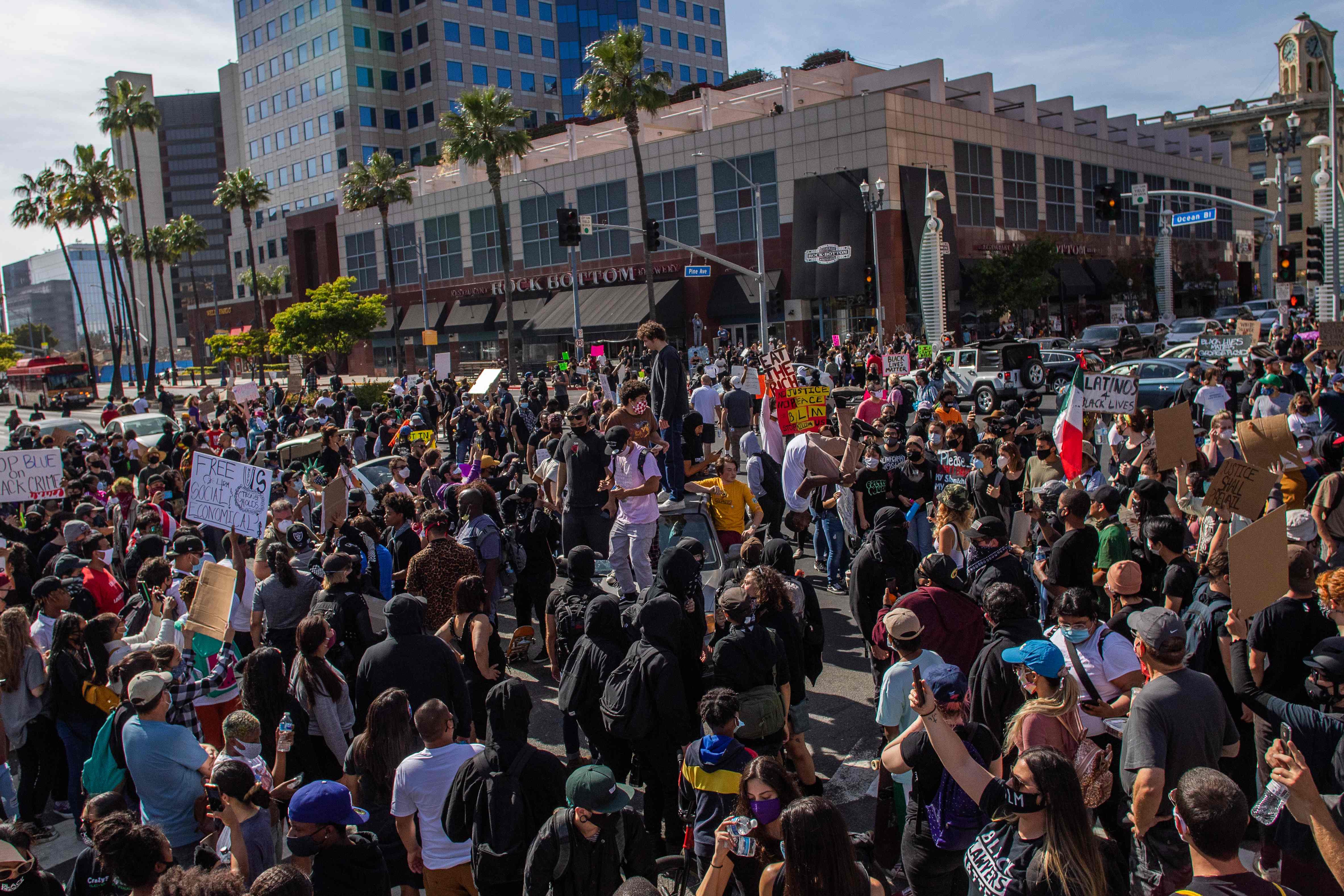 The snap shows a dad and his young kid facing off with police during protests in Long Beach, California, on Sunday.

Crowds of protesters standing against the killing of George Floyd have gathered in cities across the country over recent days.

Photographer Richard Grant told The Sun that he “had no idea it would have this kind of impact."

At some point there were guns pointed at him as the police were aiming at people behind him or around him – at the people throwing rocks and bottles and everything else.

He said: "Lots of people are saying the gun isn't pointed directly at the man and his son, and I'm pretty sure it's not either, also what I saw was in the viewfinder of my camera.

"I just got off the phone with the man in the picture, I managed to track him down. He doesn't know either – you don't really understand what's happening in the moment.

"But he said at some point there were guns pointed at him as the police were aiming at people behind him or around him – at the people throwing rocks and bottles and everything else.

"It's one frame and I don't believe the gun is pointed directly at him, not in the exact moment of that frame but I'm sure it had to have happened in the event. I'm not sure people are understanding that.

"A lot of people are also saying it doesn't matter if it was pointed at him in that moment or not or if it was just near him and I agree with that too."

One social media user commented: “They brought their kids to a peaceful protest, the police brought their riot gear and guns. Most of the protests were peaceful during the day.”

Mr Grant captioned the picture: “A man stands with his child in front of the police during demonstrations [on] Sunday in downtown Long Beach. Police pointed rubber bullet guns to get crowds to back away.”

It comes after the demonstrations in Long Beach over the weekend were marred by looting in the downtown area, with local authorities enforcing a 1pm curfew in the business district.

On Monday, Mayor Robert Garcia said: “What happened last night to our small businesses was unacceptable. 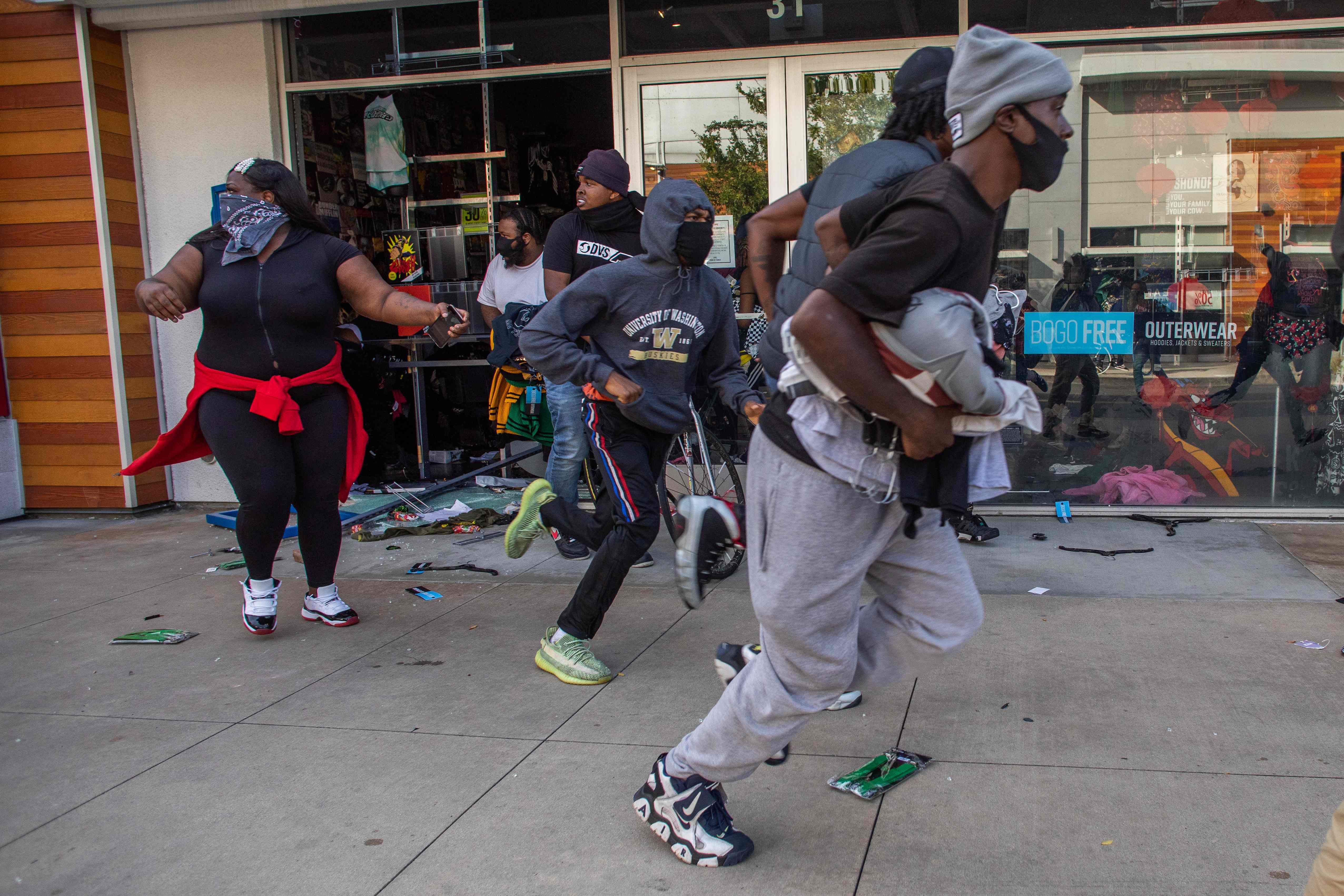 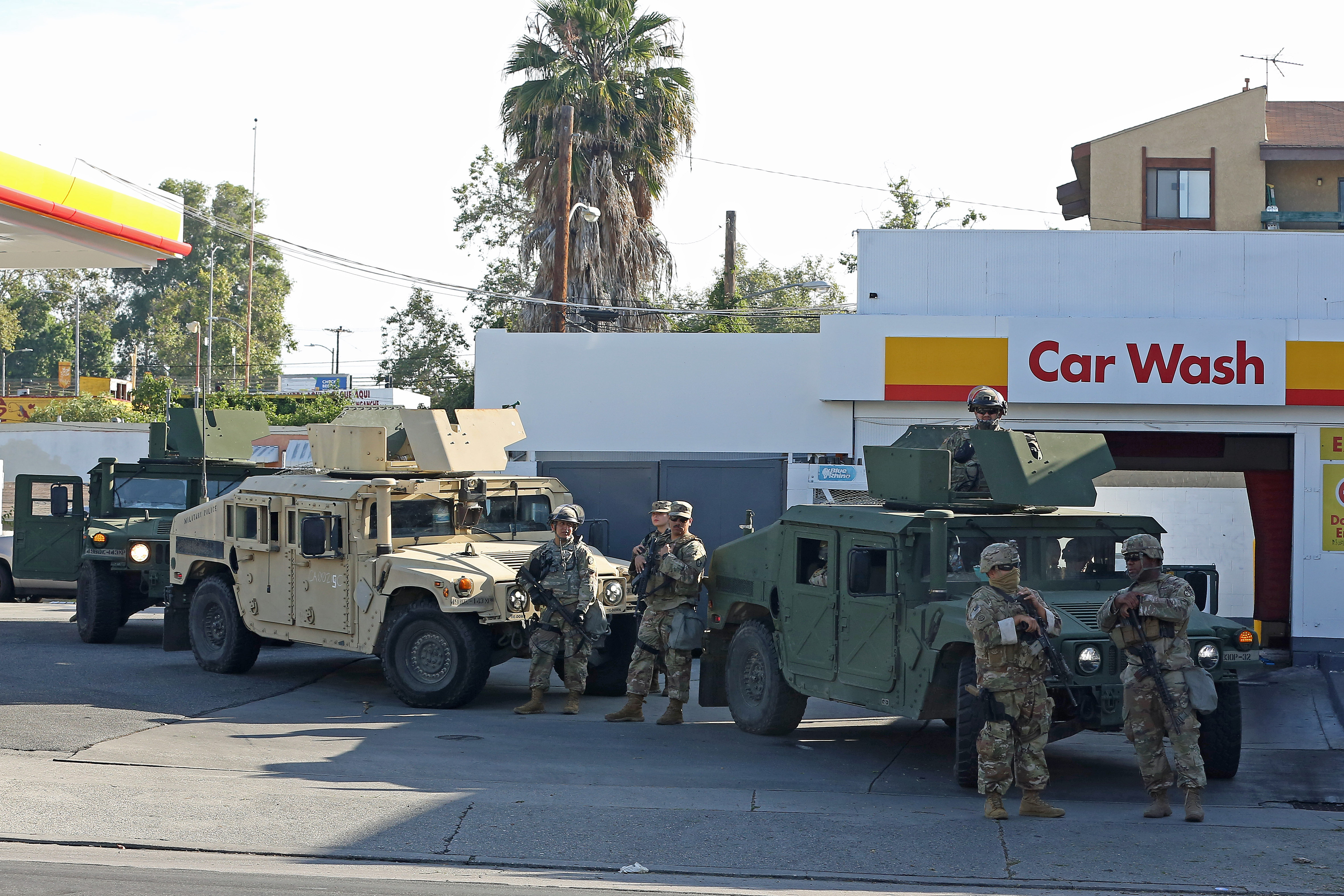 “We should be angry and saddened by the behavior of these people and these criminals.”

He continued: “There were some things that should give us some pause and are heartening.

“There was no loss of life last night. We did not lose one person in our community due to this violence.

“We had no police officers or firefighters that were seriously injured or hospitalised.”

California has seen some of the country’s largest protests, with thousands turning out in cities across the state.

Los Angeles, Oakland, San Francisco, Sacramento and San Diego were among those who saw significant demonstrations.

Nine cities in California were put under a 6pm curfew but officials, with several – including Beverly Hills and Santa Monica – under a stricter 1pm shutdown.

On Monday, Governor Gavin Newsom spoke against “the looting, the violence, the threats against fellow human beings”, saying it had “no place in this state and in this nation”.

However, he added: “The black community is not responsible for what is happening in this country right now.

“We are. Our institutions are responsible. We are accountable to this moment.

“Let’s just call that out. We have a unique responsibility to our black community in this country and we have been paying lip service about that for generations.”

More National Guard troops were called up by the Governor on Monday in an attempt to resolve tensions between police and protesters.

Governor Newsom brought in another 1,100 Guard members, bringing the total to 4,500.

On Monday, the National Guard said that 67,000 members had been deployed in 23 states and Washington DC.

The total surpasses the 51,000 that were activated during the response to Hurricane Katrina in 2005. 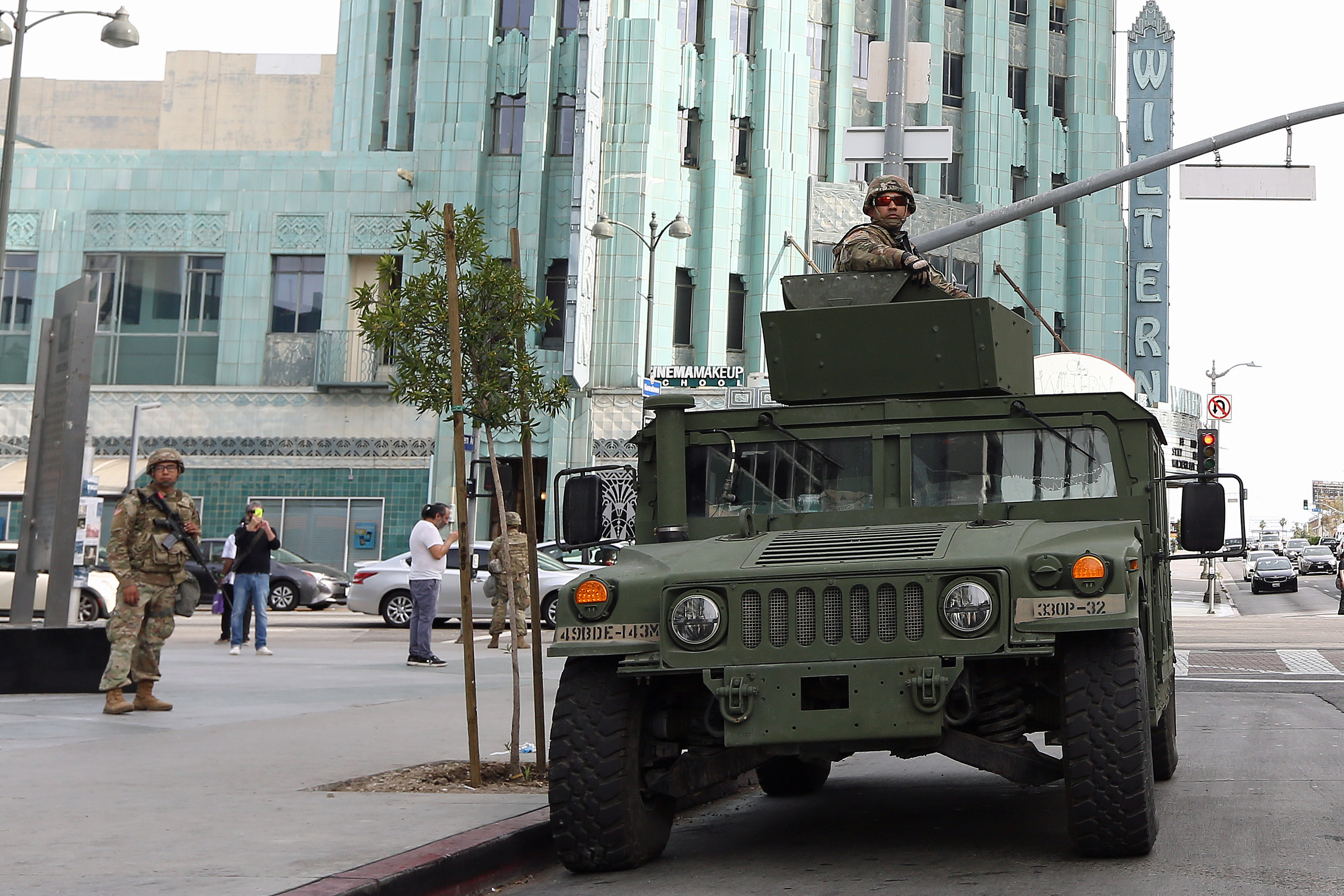 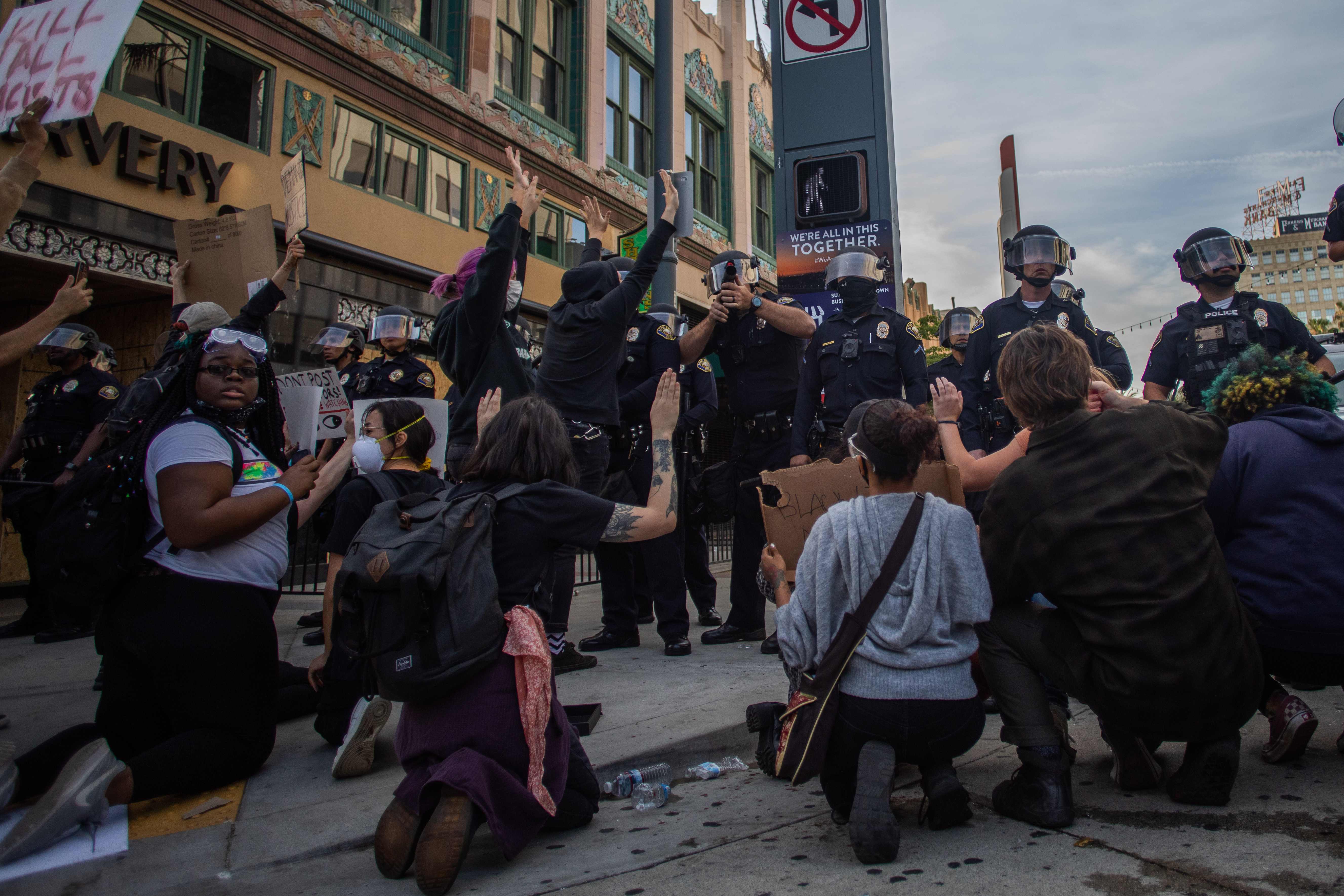