In a show of the resilience that has marked her record-breaking reign, the Queen has vowed to make two appearances on the Buckingham Palace balcony on Thursday, the first day of her Jubilee celebrations.

The appearances – which come despite recent mobility problems – will take place during Her Majesty’s official Birthday Parade, the start of the four-day bank holiday weekend.

A Royal source said: ‘The Queen is determined to take part in the Jubilee celebrations. Trooping was brought forward by one week to be part of the Jubilee this year and the Queen very much wants to be part of it.’

Crowds are expected to line the Mall to watch as the colour – or flag – is trooped by the 1st Battalion Irish Guards plus more than 1,500 officers and soldiers from the Household Division.

More than 350 horses and hundreds of military musicians will be involved in the procession, in which members of the Royal Family will travel on horseback and in carriages down the Mall to Horse Guards Parade, where the ceremony takes place. In a show of the resilience that has marked her record-breaking reign, the Queen has vowed to make two appearances on the Buckingham Palace balcony on Thursday, the first day of her Jubilee celebrations

This year marks a radical departure from the usual traditions that govern the 260-year-old occasion. Rather than inspecting the troops herself – a duty the Queen has undertaken every year of her reign – Her Majesty has reluctantly agreed to scale back her involvement and instead plans to appear on the balcony of Buckingham Palace beside her cousin the Duke of Kent to take the salute as the guards return to barracks.

The Prince of Wales will stand in for the Queen, inspecting the troops on horseback.

The Queen will later return to the balcony with more family members joining her to watch the RAF flypast at the close of the parade.

Buckingham Palace announced that ‘after careful consideration’ the Queen would not invite the Duke of York or the Duke and Duchess of Sussex to join her as they were no longer working members of the Royal Family.

A Palace spokesman said the Royal balcony appearances would be limited to members of the Royal Family ‘who are currently undertaking official public duties on behalf of the Queen’. 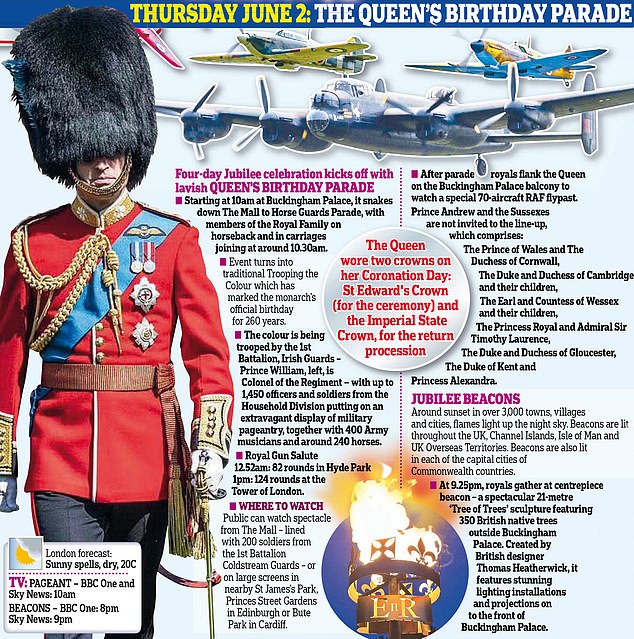 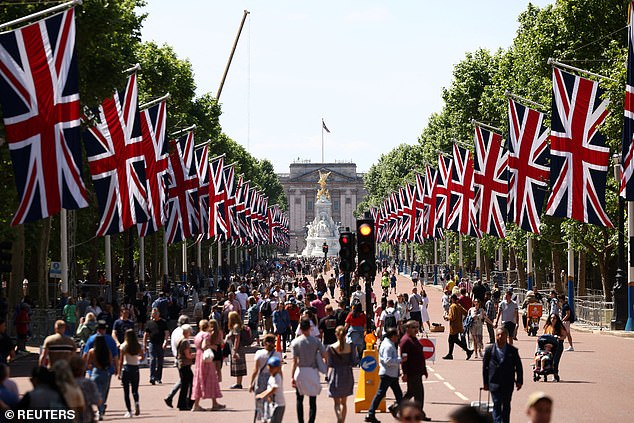 The Queen will later return to the balcony with more family members joining her to watch the RAF flypast at the close of the parade. The Mall pictured on May 22 ahead of next week’s festivites Corgis have surged in popularity – thanks to the Jubilee and Netflix’s The Crown.

More than 1,200 puppies were registered with the Kennel Club last year, the highest number in nearly 30 years.

A spokesman said: ‘The Queen played an integral part in introducing the corgi to the public consciousness.’

The first clear sign of a change to the traditional arrangements came yesterday when Prince William carried out the Colonel’s Review of the Irish Guards, regarded as a dress rehearsal for the main trooping ceremony.

The Queen’s dais, from which she would have been expected to watch the ceremony, was missing.

It will be a source of sadness to the Queen not to play her usual role in what will be the first full-scale Trooping the Colour since 2019.

The past two years have seen a dramatically reduced trooping ceremony staged in the quadrangle at Windsor Castle rather than at Horse Guards Parade, a result of Covid restrictions.

Tonight, the Queen’s late husband Prince Philip will be remembered in a feature-length BBC documentary to celebrate the Jubilee.

Her Majesty, who has watched the documentary and is believed to have given it approval, has provided a voiceover for the film. Other sections of audio are spliced over private home videos provided by the Queen to make the film.

In one section, the Queen can be heard saying of Philip: ‘That mischievous, inquiring twinkle was as bright at the end as when I first set eyes on him.’ A Royal source said: ‘The Queen is determined to take part in the Jubilee celebrations. Trooping was brought forward by one week to be part of the Jubilee this year and the Queen very much wants to be part of it’ (Piccadilly Circus pictured on Friday ahead of Jubilee) 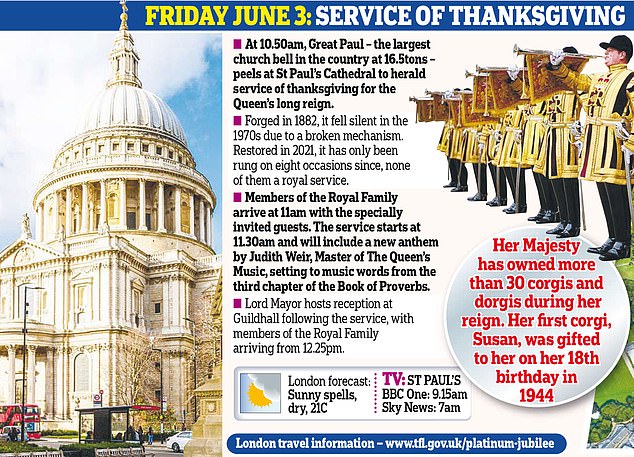 Britons are predicted to spend more than £200 million on Platinum Jubilee souvenirs and gifts.

Around six million mugs, ten million flags and one million books and portraits of the Queen are expected to be snapped up, according to the Centre for Retail Research.

Halcyon Days, which makes fine china in Stoke-on-Trent and is one of just 14 firms to hold three Royal Warrants, is selling £825 hand-crafted enamel boxes featuring a 1956 Cecil Beaton portrait of the Queen and bone china mugs decorated with iconic red telephone boxes for £39.

However, other firms are looking to cash in on the spending splurge with some rather more unusual offerings. Royal enthusiasts can have the Queen watching over them while they sleep by installing ‘wacky and wild’ Jubilee blinds from BlindsbyPost. Britons are predicted to spend more than £200 million on Platinum Jubilee souvenirs and gifts. Pictured is memorabilia in a shop ahead of the 70th anniversary 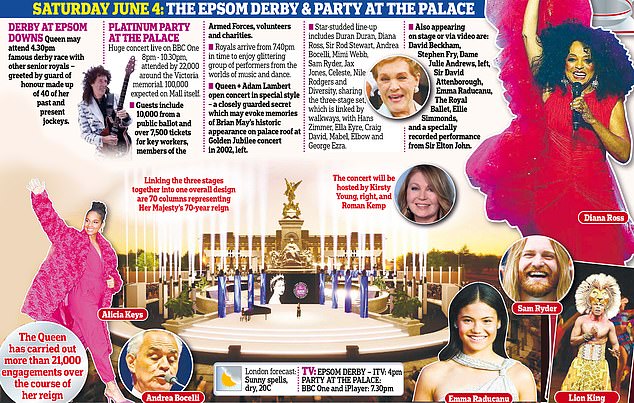 Gym enthusiasts can jump into a pair of Jubilee leggings for £48, with each leg bearing a full-length pastel portrait of the Queen, and a firm in Canterbury is selling Queen and Corgi salt and pepper shakers for £6.50.

For the truly dedicated collector, there are 10,000 items of memorabilia produced in China, each mistakenly embossed with ‘Platinum Jubbly’ instead of Jubilee. The cups, mugs and plates were snapped up by the Wholesale Clearance website. Boss Karl Baxter said: ‘What could be more unique than our misprinted crockery?’

A ‘party-pooper’ council has banned nine street parties for reasons including fears that ‘road closed’ signs may confuse drivers.

Locals in Merewood Road, Barnehurst, had their request for it to be closed rejected by Bexley Council in South-East London – even though it appears to fit the bill as it is lined with houses, buses do not use it and traffic can be diverted easily to a neighbouring road.

The council said a mini-roundabout at one end would make a diversion confusing. But resident Joanne Baker said: ‘The council are being party-poopers. We had bunting ordered and… we’d have had a bouncy castle for the kids, but that’s not happening as we’ve had to scale back plans.’ When householders said they would instead hold parties in their front gardens, which do not require permission, the council warned them not to gather on pavements.

A party on Langdale Crescent in Bexleyheath was stopped when the council said gas works had been booked first, while an event on Maiden Lane in Crayford was ruled out when officials said a road diversion was not suitable, despite an alternative route close by.

The council said it had approved 140 other road closures.