So no pot of gold? Rare flat rainbow beams across sea in Devon during Storm Francis as sun shines through spray whipped up of the sea

An extraordinary rare flat rainbow beamed across the sea off the coast of Devon as Storm Francis battered its way across the country this week.

The incredible sight, which was spotted in Torbay on Tuesday, made its appearance as record-breaking wind gusts of more than 80mph brought heavy downpours and travel chaos across the UK.

The image, which was photographed on Paignton beach, shows the spectrum of colours rising up from the sea to create the unique phenomenon.

Flat rainbows along the sea occur when light from the sun shines through the spray whipped up from the water and is reflected, refracted and dispersed by the droplets. 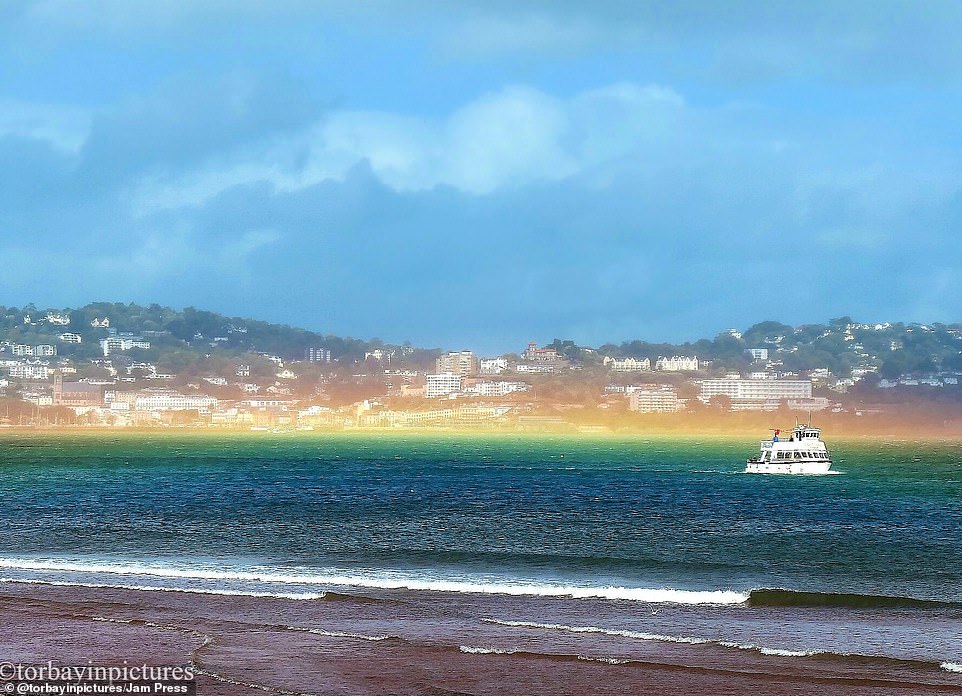 The rare flat rainbow was photographed beaming across the sea in Torbay, off the coat of Devon, on Tuesday, as Storm Francis made its way across the country 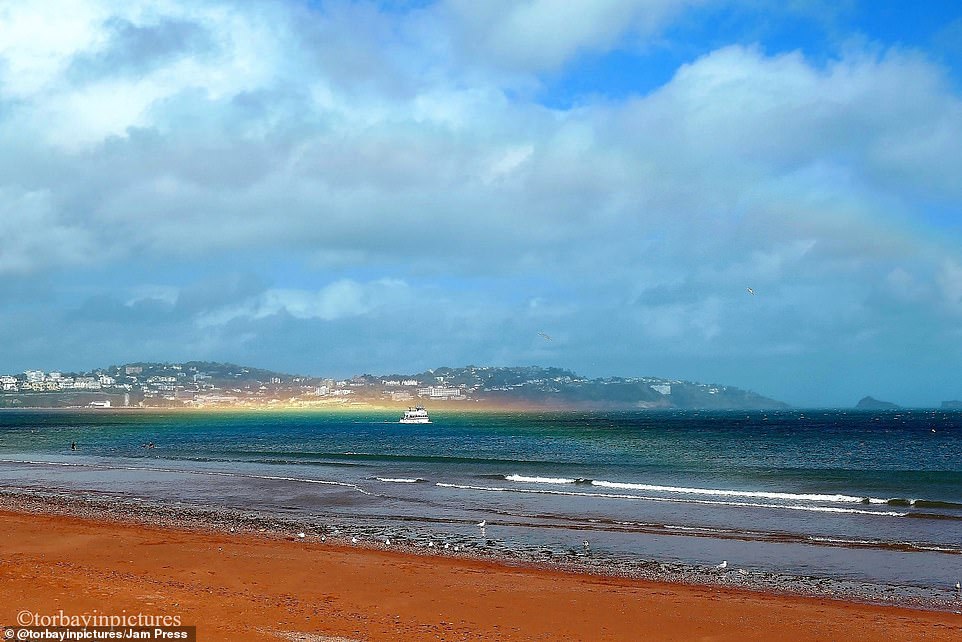 The rainbow, which was photographed on Paignton beach, saw a spectrum of colours rising up from the sea in a flat rather than a curved shape

A spokesperson from the Met Office explained: ‘This looks like spray, being blown up from the sea by the strong gusty winds due to Storm Francis.

‘The same principles as in a usual rainbow are then in play, so the light is being reflected, refracted and dispersed by the water droplets giving the different colours.

‘However, because it’s water blown up from the sea it’s flatter and not curved as when caused by water droplets/rain in the sky.

‘It was like a rainbow mist lying flat on the sea, one colour on top of the next.’

Following the rare sight, one resident told Devon Live: ‘It was warm and sunny so we decided to take the dog for a walk along the beach.

‘When we got to the pier it suddenly started raining, no clouds, just rain from the clear blue sky. 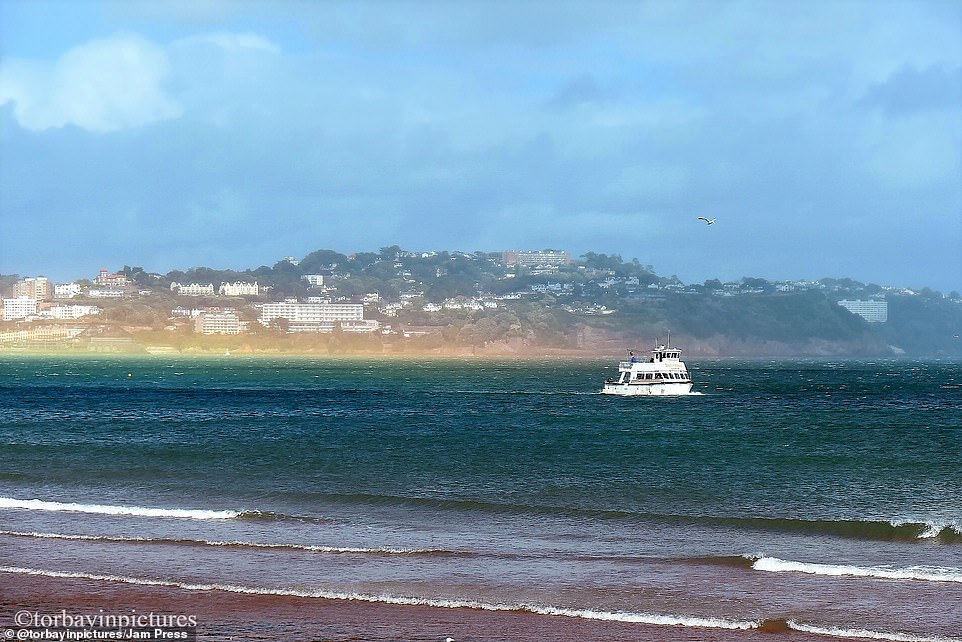 The phenomenon occurs when light from the the sun shines through the spray from the sea and is reflected, refracted and dispersed by the water droplets 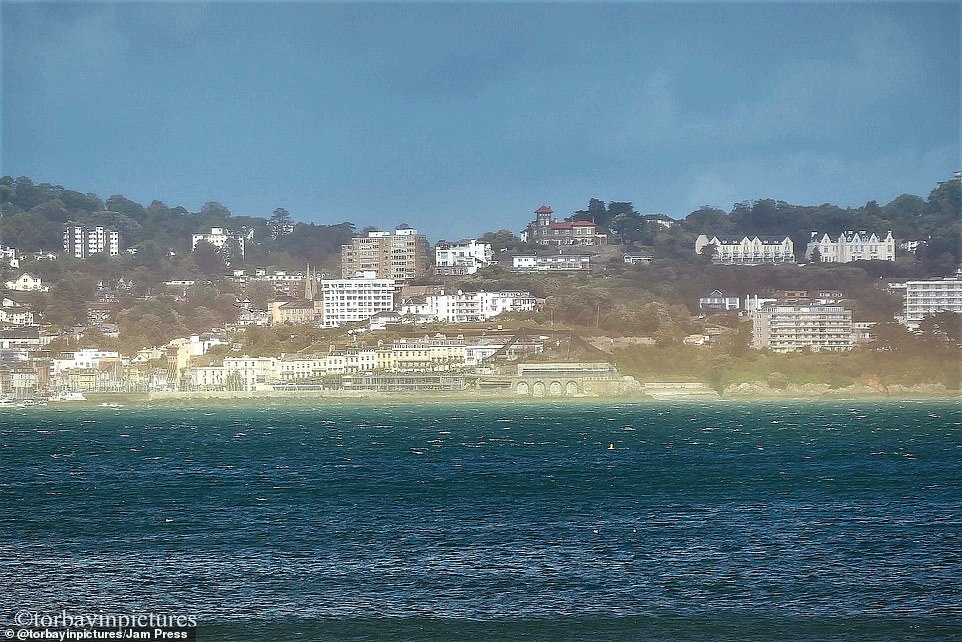 How do flat rainbow’s occur?

Flat rainbows can appear across the sea when light hits water droplets and reflects, refracts and disperses against them.

As the spray from the sea is blown up by strong winds, the light reflects off the droplets and a spectrum of colours emerge.

The rainbow appears flat rather than curved because the water is blown up from the sea.

When a flat rainbow occurs in the sky it is sometimes referred to as a ‘fire rainbow’.

Fire rainbows usually occur when cirrus clouds are far enough up in the air to form plate-shaped ice crystals.

When the sun is at the right angle it hits the top of these crystals and splits into different colours that can be seen from the ground.

A similar phenomenon was seen in Bristol in March 2017 and in Paris in 2013 after heavy rainstorms lashed above both cities during the day.

However, in both of those instances, the rainbows took on a slightly curved appearance as opposed to the flat one seen at Torbay this week.

The recent phenomenon came as Storm Francis left a trail of devastation in its wake after it brought gusts of more than 80mph and six weeks’ worth of rain.

There were 36 flood alerts and five warnings in place for England, as well as 17 for Wales and 11 in Scotland after homes were flooded and roads and railway lines blocked by the storm.

The strongest gusts recorded was the 81mph wind that hit The Needles near the Isle of Wight at around 8pm on Tuesday. This is just short of the August record for the UK which was 87mph recorded in 1996.

North Wales Police said flooding and a landslide had closed the A5 on Wednesday morning from Bethesda to Betws y Coed.

Carl Foulkes, the Chief Constable at North Wales Police, tweeted: ‘A really busy night across the force with colleagues working with fire and local authorities to manage impact of storm Francis.

‘Still a number of roads closed and we continue to monitor impact of rain. Important that everyone stays alert and safe.’

The Met Office has never had two named storms in August since the process started in 2015, but Francis came on the back of Ellen, which struck last week and caused power outages.