Get away from it all like Boris! £1,200-a-week remote Scottish holiday cottage where PM stayed during Covid pandemic is booked up by staycationers until May 2021

A remote Scottish holiday cottage where Boris Johnson stayed during the pandemic has been booked up by staycationers who want to holiday like the PM until May 2021.

A tourist board has welcomed the surge in bookings but campaigners warn the influx could overwhelm local services in the small coastal village, and spread Covid-19.

The Prime Minister stayed at the Old School House cottage with his fiancee Carrie Symonds and their son Wilf, five months, in August. 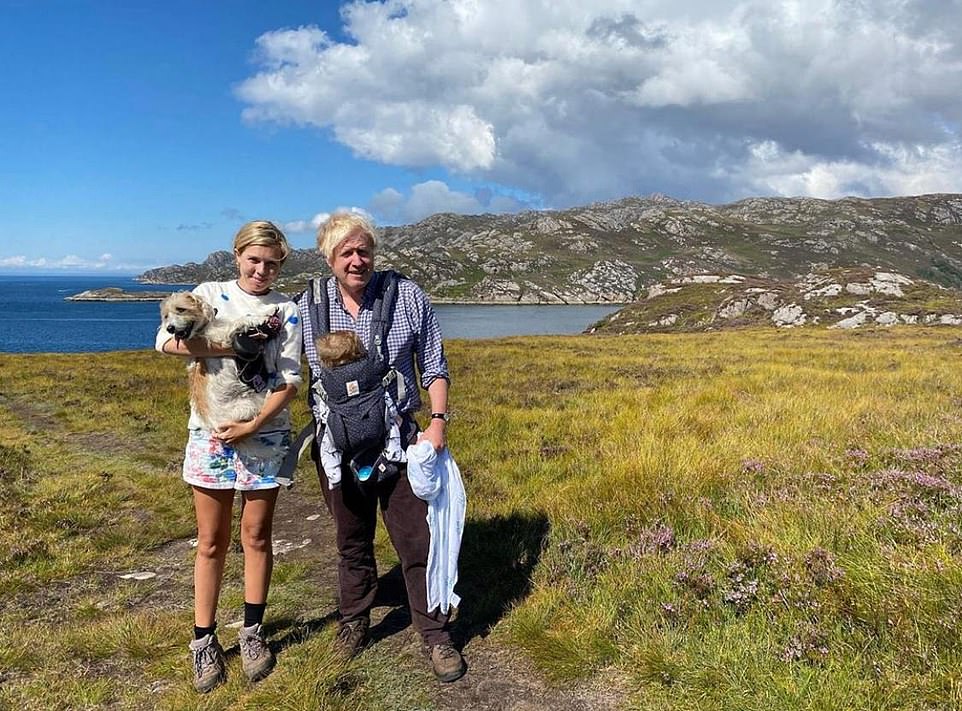 The Prime Minister Boris Johnson (right) stayed at the Old School House cottage with his fiancee Carrie Symonds (left), their son Wilf, (with Boris) and  their terrier Dylan (with Carrie) during the summer

At the time, Mr Johnson was blasted for travelling 620 miles from Downing Street for a holiday while the exam results fiasco – when an algorithm messed up grades – was raging.

Sheep farmer Kenny Cameron also slammed the PM for accidentally pitching a trendy bell tent on his land, which Mr Johnson mistook for part of the cottage’s grounds.

According to Cottages.com, the Old School House is now fully booked until May 22 next year, when it can be hired for seven nights for £1,229.

Staycationers and locals have clashed in the Highlands during the pandemic, with tourists accused of littering, camping in back yards and disrespecting communities. 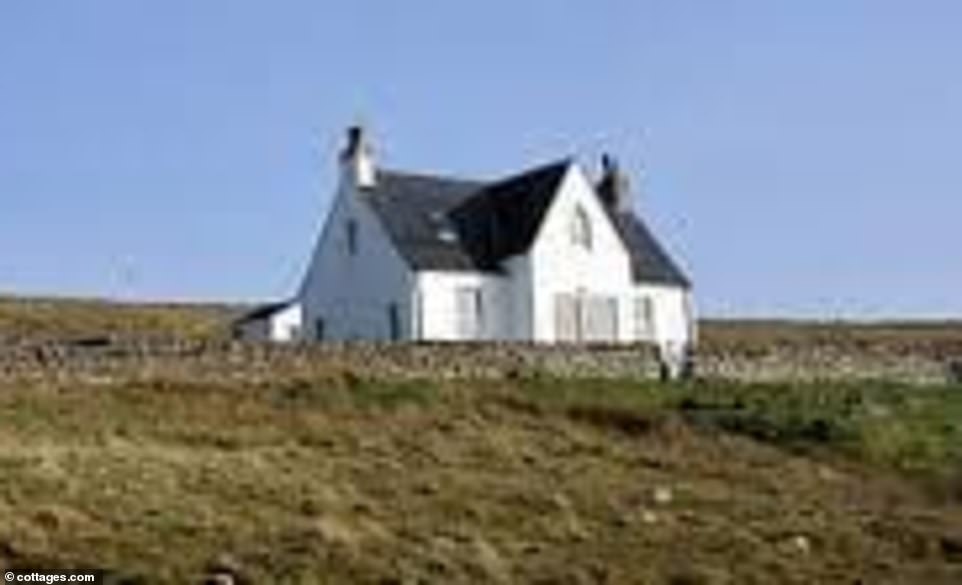 Old School House: This is the property where Prime Minister Boris Johnson stayed at with his fiancee Carrie Symonds and their son Wilf, five months, in August 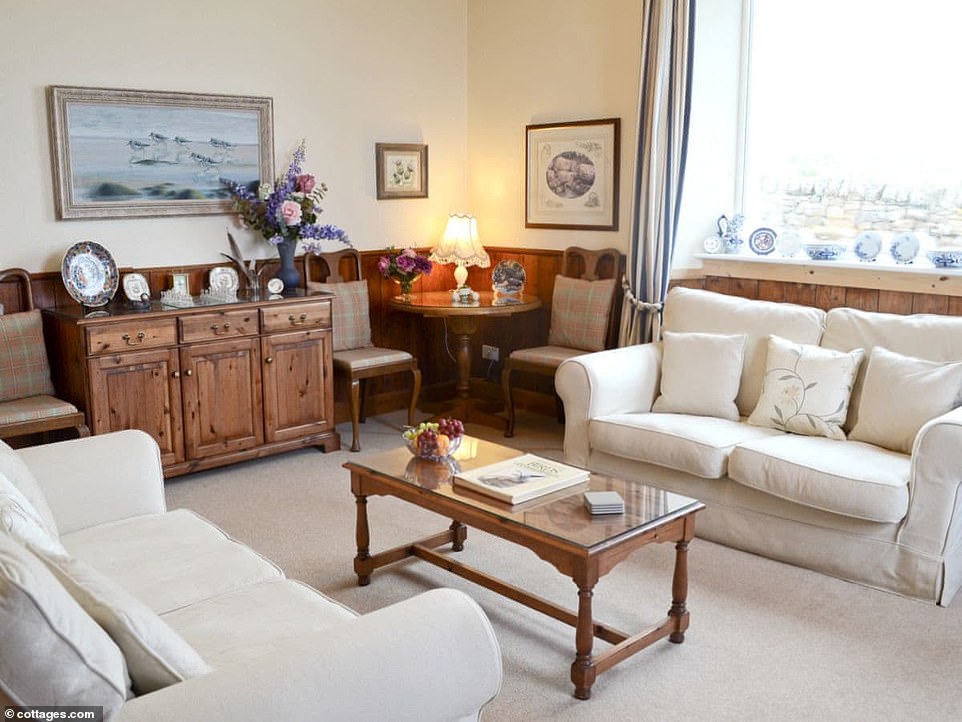 This former school house has been tastefully converted, whilst retaining interesting original features. The part-panelled living room was formerly a classroom

Highlands SNP Councillor Ron MacWilliam said: ‘We have a great tourism sector in the Highlands with world class scenery and outdoor leisure pursuits.

‘At any other time the attention of the Prime Minister would have been welcomed by locals, businesses and communities.

‘What Mr Johnson needs to commit to is an extension of the furlough scheme to protect local businesses and livelihoods until such time as Covid-19 is under control. 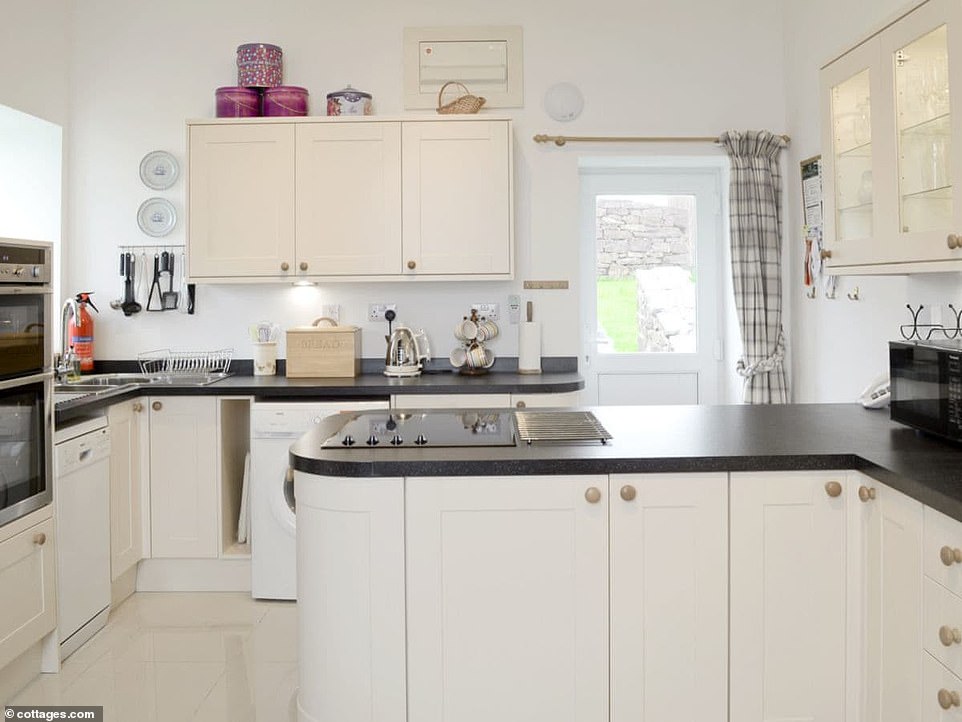 ‘There have been far too many campers this year and our communities simply do not have the healthcare facilities to cater for what could go wrong in the event of a major Covid outbreak,

‘Self-catering lets do offer a relatively safer alternative to hotel stays but with the Public Health situation worsening by the day, the Government needs to turn its focus to supporting people, which it is currently failing to do.’

But a spokesperson for Visit Scotland said: ‘In one of the most challenging years the tourism and events industry has faced, it is especially pleasing to hear news of businesses doing well. 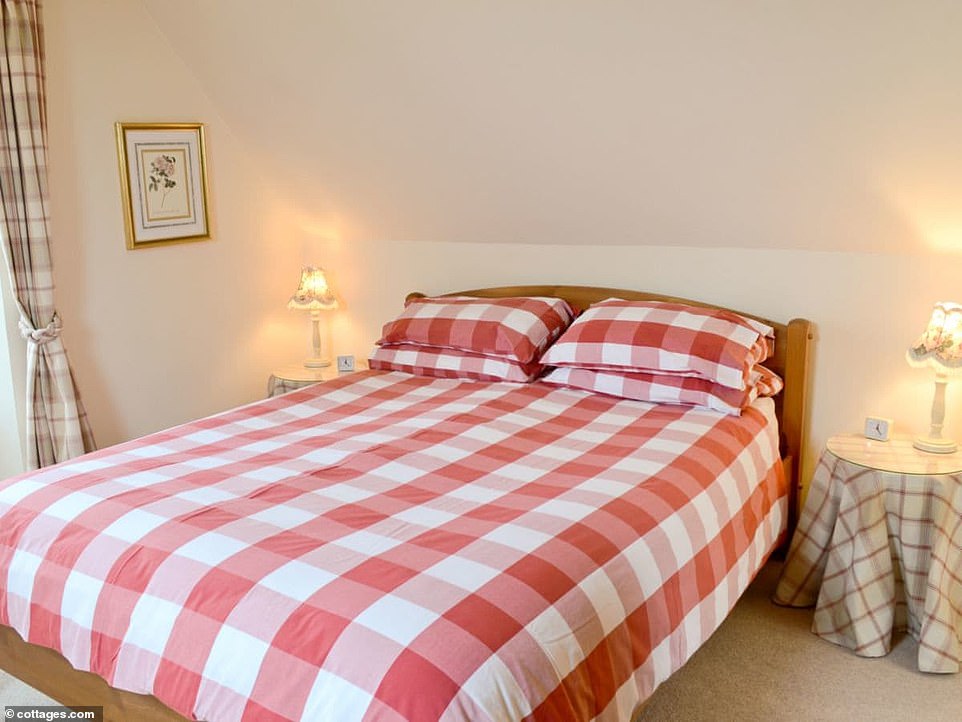 One of three bedrooms, the cottage is a perfect place to rest after a day of exploring the scenic Applecross and Torridon areas 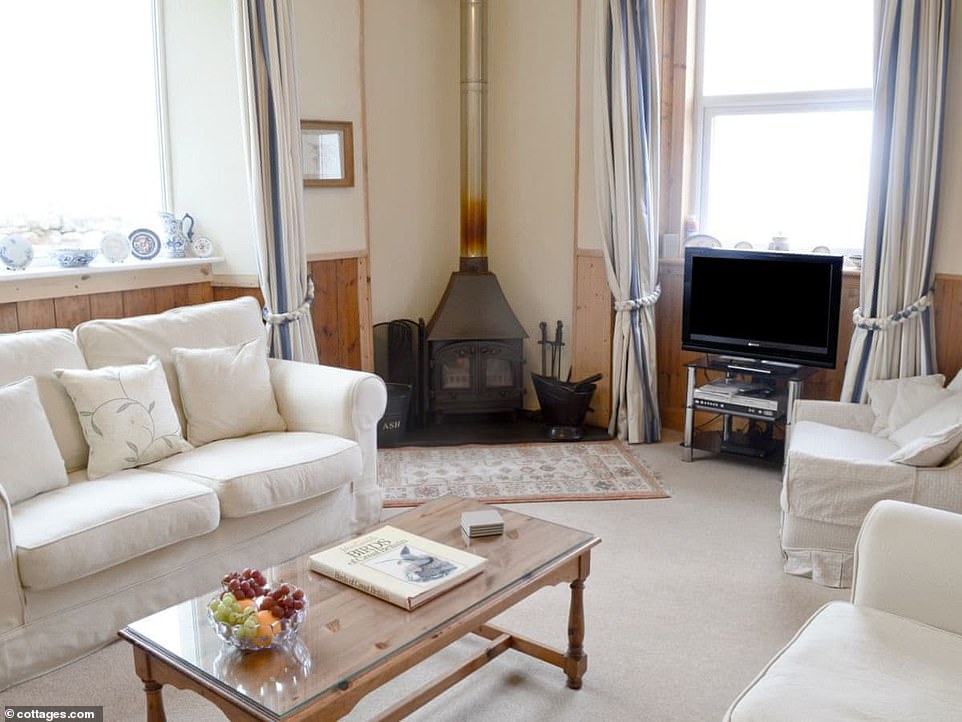 The tourist board has welcomed the surge in bookings but campaigners warn the influx could overwhelm local services in the small coastal village, and spread Covid-19

‘The Applecross Peninsula in Wester Ross has some truly spectacular remote scenery, with the road from Loch Torridon to the north, and the approach from the south over the Bealach na Ba (Pass of the Cattle), one of the highest in Britain, with incredible views out across the bay to Raasay and Skye.’

The secluded three-bed cottage overlooking the sea is dog friendly – which was handy for the PM’s terrier Dylan.

Describing the property on its website, Cottages.com said: ‘This secluded and spacious cottage, with its own walled garden, enjoys a gloriously sunny position on the seashore with spectacular views towards the islands of Raasay, Rona and Skye. 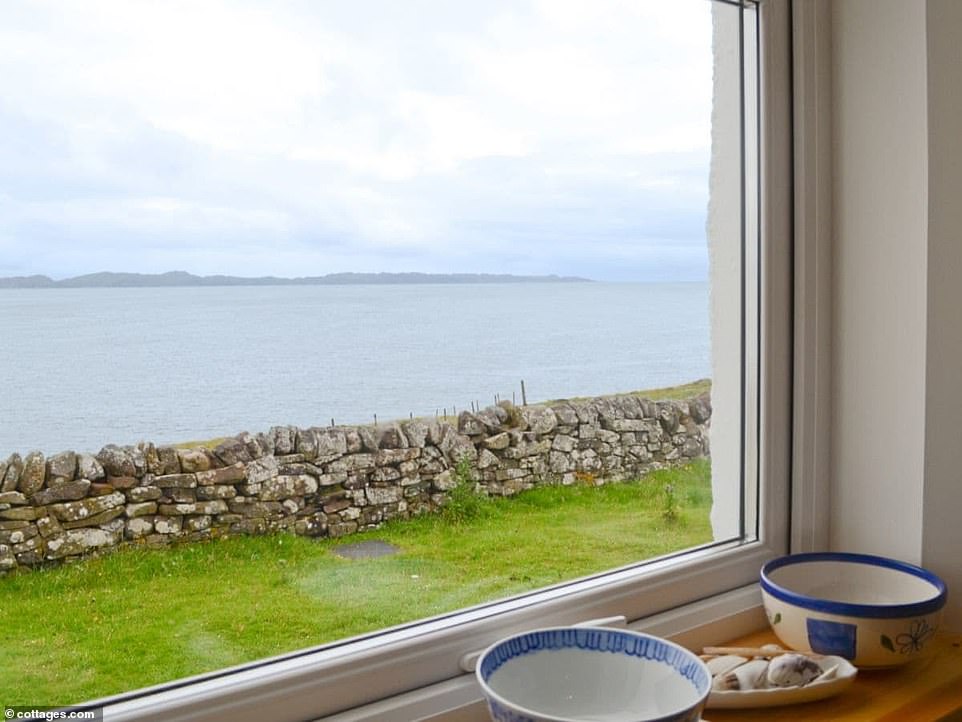 The cottage offers excellent walking and climbing terrain from its doorstep, both inland and along the rugged coastline – seals and otters can be spotted just off shore too 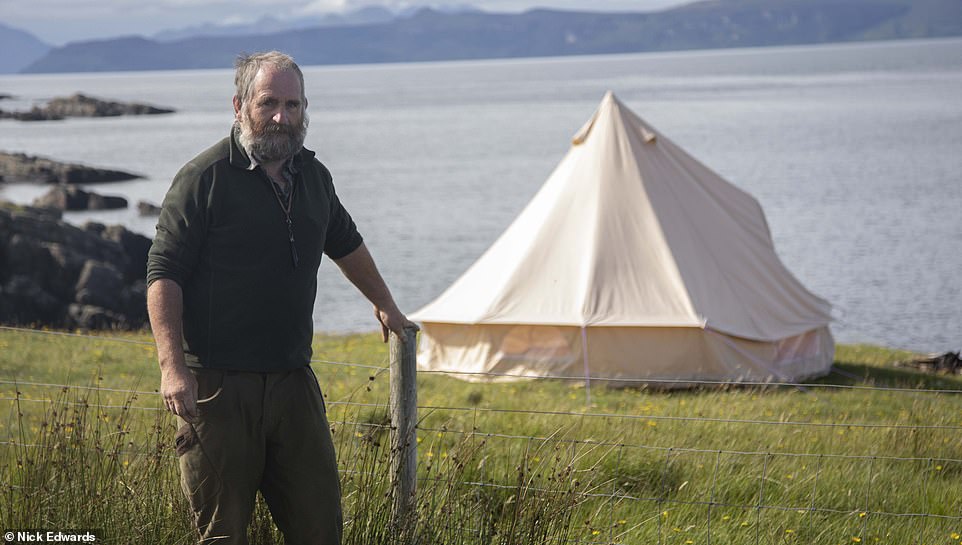 Sheep farmer Kenny Cameron (pictured) slammed the PM for accidentally pitching a trendy bell tent on his land, which Mr Johnson mistook for part of the cottage’s grounds when he stayed there in August

‘Reached via a quarter-mile track, this former school house has been tastefully converted, whilst retaining interesting original features; formerly classrooms, the part-panelled living room and well-equipped modern kitchen feature lovely high ceilings, and there is a large picture window in the hall, ideal for viewing wonderful sunsets and abundant wildlife.’

Boris Johnson and the Treasury were approached for comment.