Robert Durst gets life for California murder of best friend

Durst is accused of killing a friend 20 years ago and was recorded saying ‘I killed them all, of course’ in 2015 documentary. Jacqui Heinrich reports.

Robert Durst, the New York real estate heir, was sentenced to life in prison in a Los Angeles County courtroom Thursday for the 2000 murder of his longtime friend Susan Berman following a lengthy, drawn-out legal saga.

Durst, 78, slouched in a wheelchair and dressed in a brown prison jumpsuit, was convicted last month of first-degree murder for shooting Berman point-blank in her Los Angeles-area home just before Christmas. Prosecutors alleged he killed her in an effort to silence her, as she was slated to talk to authorities about how she provided a phony alibi for Durst after his first wife vanished in 1982.

Kathie Durst went missing from the couple’s South Salem, N.Y., home and has been declared dead, though her body has never been found. Durst has never been charged in her disappearance.

Several of the jurors who convicted Durst were present in the courtroom when the sentence was handed down. Durst declined to give an allocution statement. 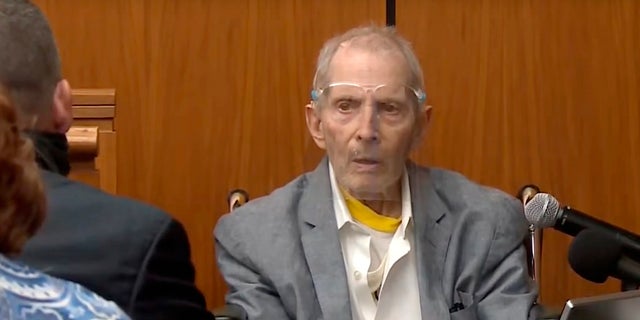 Several of Berman’s loved ones gave impact statements during Thursday’s proceedings. Sareb Kaufman, who was raised by Berman and considered her his mother, said her death changed his life.

Susan Berman’s cousin, Denny Marcus, told the judge: “I was robbed and my beautiful son was robbed of an absolutely extraordinary, unforgettable brilliant person whose life was savagely taken from her.”

“I will never hate Bobby because she loved him,” she added.

On the witness stand, a frail-looking Durst claimed he found Berman dead in her home but denied being there at the time of her death. Under cross-examination, he testified that he would lie if he had killed her.

During his trial, prosecutors presented evidence they say proves Durst killed his wife in their home in an effort to provide a motive for the Berman slaying. They also introduced evidence from a previous trial in which Durst was acquitted of fatally shooting a neighbor in Galveston, Texas.

Durst was in hiding in Texas to avoid possible criminal charges after investigators reopened the case of his missing wife, prosecutors said. He was living in a boarding house under an alias when he killed Morris Black.

He was later acquitted of the slaying but convicted of destroying evidence for chopping up Black’s body and tossing it out at sea. Prosecutors said Black was killed after he discovered Durst’s true identity.

His health has declined in recent years and Durst was bound to a wheelchair during his trial. When the verdict was announced, he was not in court because he was being quarantined after possibly being exposed to COVID-19.

The trial begin in March 2020 but was paused because of the pandemic and resumed in May.

The sentencing came years after Durst participated in the 2015 HBO documentary “The Jinx: The Life and Crimes of Robert Durst.”  In the final episode, Durst was overhead on a hot mic saying: “What the hell did I do? Killed them all, of course.” 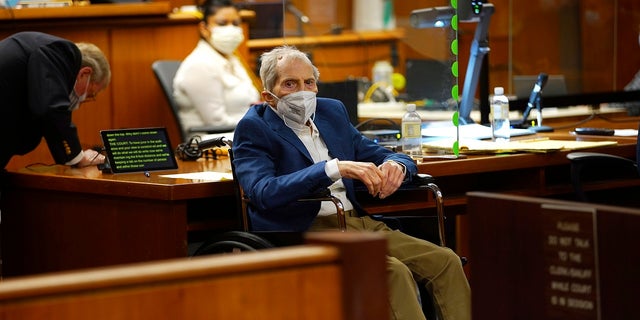 He later claimed there was a misunderstanding and that he either spoke too soft for the mic or it failed to utter what he was thinking. Westchester County, New York prosecutors plan to impanel a grand jury in the coming weeks to hear evidence against Durst in the disappearance of Kathie Durst.