‘Separated by distance but united in faith’: Holy Week celebrated in shadow of virus

Jerusalem: Christians in the Holy Land marked Good Friday without the mass pilgrimages usually seen in the days leading up to Easter because of the coronavirus, and worshippers in many other predominantly Christian countries where the virus is still raging observed their second annual Holy Week with tight restrictions on gatherings.

In Jerusalem, many holy sites were open, thanks to an ambitious Israeli vaccination campaign. It was a stark contrast to last year, when the city was under lockdown. 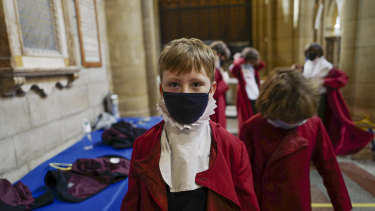 Young choristers wear masks as they prepare for the the Good Friday morning choral service, which took place without members of the public present due to Covid-19 regulations, at Truro Cathedral in Truro, England. Credit:Getty

In neighbouring Lebanon, Christians observed Good Friday under a lockdown and suffering a severe economic crisis.

In Latin America, penitents from Mexico and Guatemala to Paraguay carried tree branches covered with thorns and large crosses in Passion Plays re-enacting the crucifixion of Jesus Christ.

At the Vatican, Pope Francis presided over a torch-lit Way of the Cross ceremony in St Peter’s Square, foregoing for a second year the traditional Colosseum procession that draws thousands of pilgrims, tourists and Romans.

Worshippers in the Philippines and France marked a second annual Holy Week under movement restrictions amid outbreaks fanned by more contagious strains.

In the US, officials urged Christians to celebrate outdoors, while social distancing, or in virtual ceremonies. 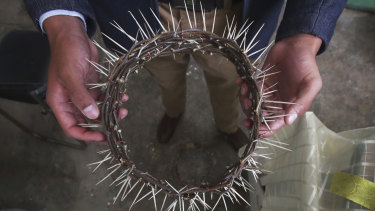 Brando Neri Luna, who interprets the role of Jesus Christ during the Stations of the Cross passion play during Holy Week, holds a crown of thorns during a Mass celebrating the feast day of St Joseph, the patron saint of carpenters, in Mexico City. Credit:AP

In Jerusalem’s Old City, Franciscan friars in brown robes led hundreds of worshippers down the Via Dolorosa, retracing what tradition holds were Jesus’ final steps, while reciting prayers through loudspeakers at the Stations of the Cross. Another group carried a large wooden cross, singing hymns and pausing to offer prayers.

Religious sites were open to limited numbers of faithful. The Church of the Holy Sepulchre, built on the site where Christians believe Jesus was crucified, died and rose from the dead, was open to visitors with masks and social distancing.

Despite one of the world’s most successful vaccination campaigns, air travel to and from Israel is still limited by quarantine and other restrictions, keeping away the foreign pilgrims who usually throng Jerusalem during Holy Week. In past years, tens of thousands of pilgrims would descend on the city’s holy sites. 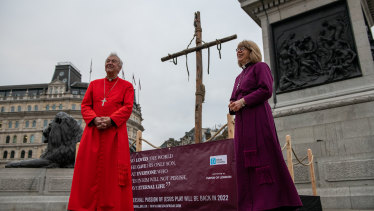 Archbishop of Westminster, Vincent Cardinal Nichols, and Bishop of London, Sarah Mullally, deliver Easter messages and a prayer in front of crucifix at Trafalgar Square on April 2, 2021 in London, England.Credit:Getty

“In regular years we urge people to come out. Last year we told people to stay at home,” said Wadie Abunassar, an adviser to church leaders in the Holy Land. “This year we are somehow silent.”

“We have to pray for those who can’t be here,” said Alejandro Gonzalez, a Mexican living in Israel. “Those of us who can be here have a responsibility to keep them in mind and to go in this Way of the Cross that they are going through as well.”

In Lebanon, Christians observed Good Friday amid a severe economic crisis exacerbated by the massive explosion that demolished parts of the capital last year. Even traditional Easter sweets are a luxury few can afford.

“People are not even talking about the feast,” says Majida Al Asaily, owner of a sweets shop in Beirut. “We haven’t witnessed anything like this year, despite the war and other difficulties that we had faced before.” 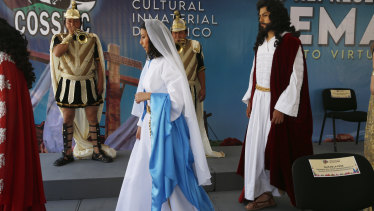 A couple playing the role of Jesus Christ and Mary walk in the Fuego Nuevo Museum during a presentation of the actors of the Stations of the Cross Passion Play in Mexico City. Credit:AP

At the Vatican, candles flickering in a breeze were placed in a circle around St Peter’s Square’s central obelisk and along a path leading to steps outside St Peter’s Basilica. There, Francis sat under a canopy in the darkness on a warm evening, listening to children reading meditations composed by other children that recounted sorrowful episodes in their lives.

One child wrote of loneliness in the COVID-19 pandemic, not being able to visit grandparents to keep them safe from contagion and missing schoolmates and teachers since schools in Italy have been closed for long stretches due to lockdown. Another wrote about grandpa dying of COVID-19 without family members in a hospital.

At one point, Francis prayed that God would give people his hope so that “we will be able to recognise you even in the darkest moments of our life.”

Anti-pandemic measures have devastated tourism in Italy and largely reduced religious pilgrimages to a trickle. Only a few hundred participants, including prelates, were allowed to attend.

In the US, the faithful were urged to abide COVID-related capacity restrictions at houses of worship, observe online services and take mask-wearing and social distancing precautions at outdoor ceremonies. 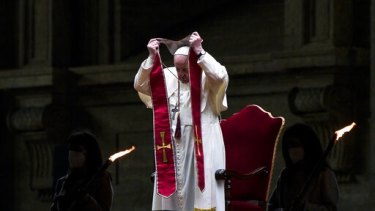 Pope Francis leads the Via Crucis (Way of the Cross) procession in the empty square outside the Saint Peter’s Basilica during Good Friday celebrations at the Vatican, with no public participation due to the Coronavirus pandemic,Credit:AP

Police officers escorted the entourage through the neighbourhood as church workers handed out face masks to those not wearing them in the crowd of onlookers.

In New York, Archbishop Timothy Dolan presided over a Celebration of the Passion of the Lord at St. Patrick’s Cathedral attended by mask-wearing clergy and worshippers. That service, an evening Stations of the Cross ceremony and a reflection on the passion and death of Christ were broadcast on the Catholic Channel on Sirius XM and livestreamed on the cathedral’s YouTube channel and website.

“We may be separated by distance, but we are united in Faith,” the archdiocese said in its invitation to Holy Week celebrations. 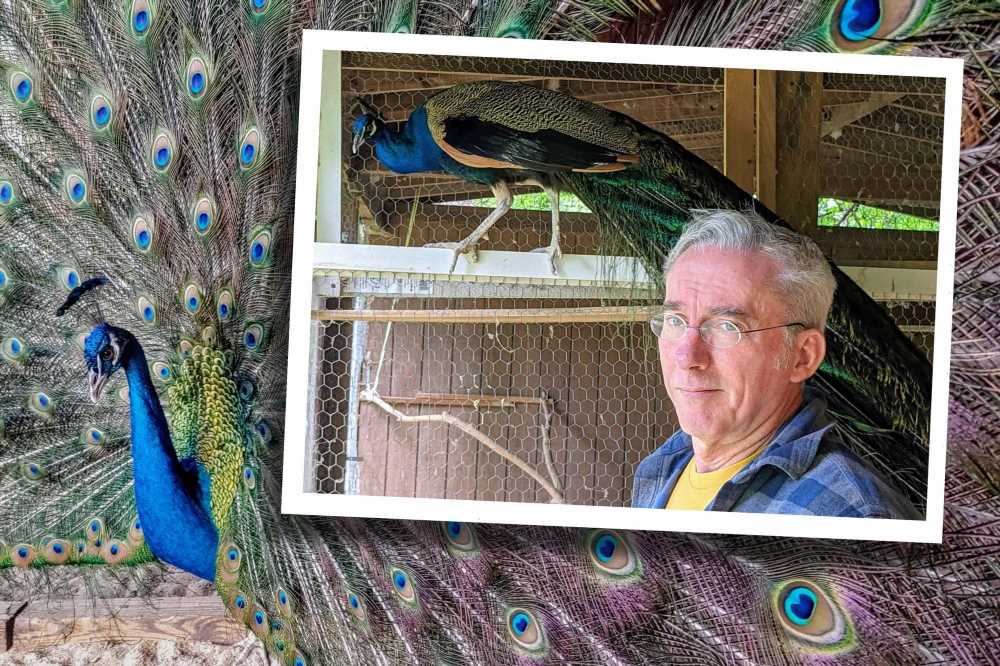