The ducks, geese and hardy cold-water swimmers in London’s Hyde Park have a new neighbor: a monumental floating structure made from 7,506 stacked barrels colored bright red, mauve and blue.

‘The London Mastaba’, unveiled Monday, is the latest installation by Christo, a master of supersized artworks who has previously wrapped Berlin’s Reichstag in silver fabric and festooned New York’s Central Park with thousands of saffron-colored cloth gates.

The 83-year-old artist’s first major creation in London rises 65 feet (20 meters) above the surface of the park’s Serpentine Lake.

Its slope-sided trapezoid was inspired by ancient Mesopotamian benches and Egyptian tombs. The colors have been chosen to complement the lush greenery and gray-blue skies of a London summer. 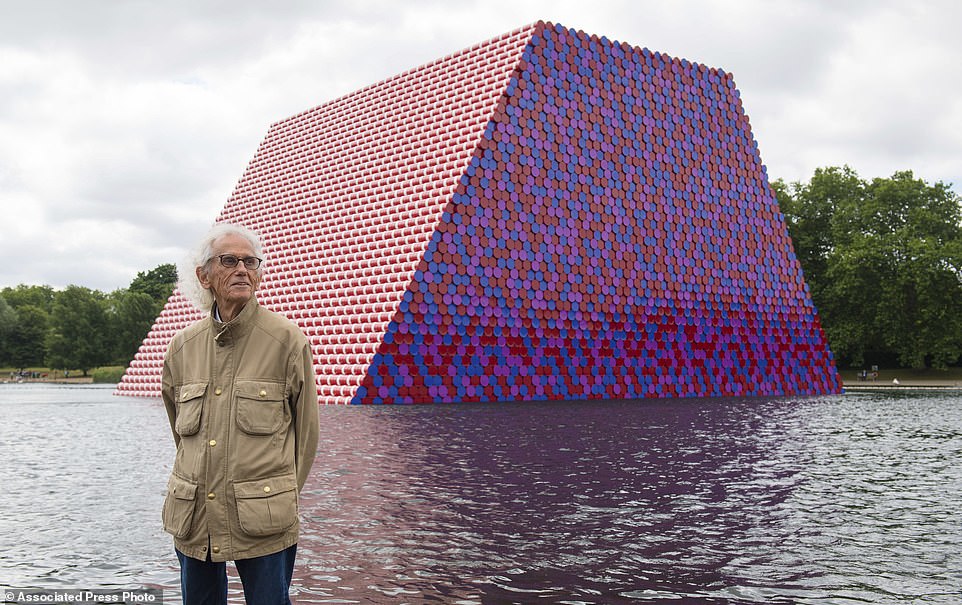 ‘The London Mastaba’, unveiled Monday, is the latest installation by Christo. It a monumental floating structure made from 7,506 stacked barrels colored bright red, mauve and blue 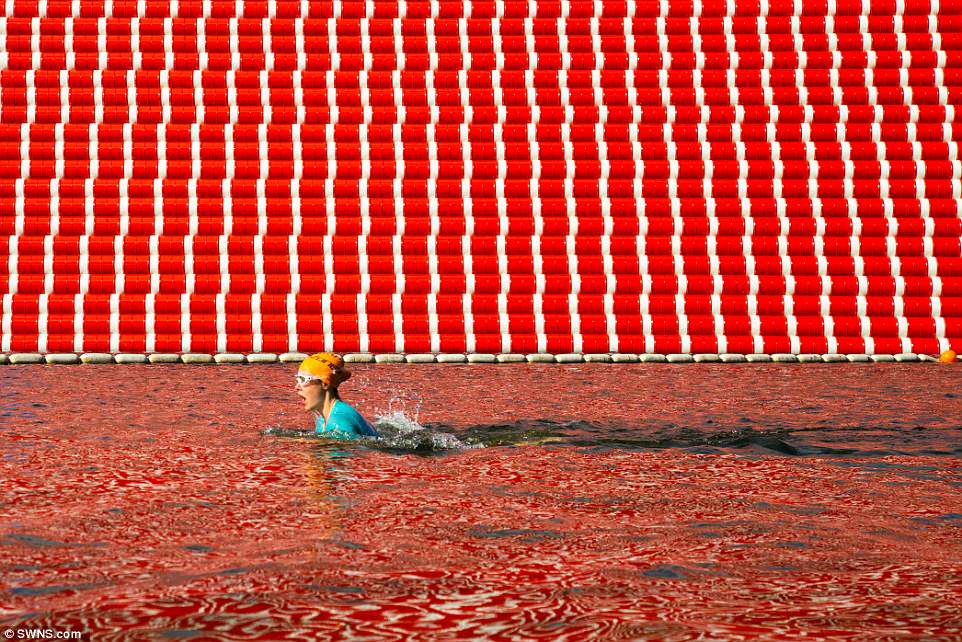 But not everybody is happy about the new addition – with members of the Serpentine Swimming Club complaining the structure means they have to swim in gloom.

‘It casts a shadow on the water. We’re swimming in gloom,’ one regular told the Telegraph. Another added: ‘It’s an affront to nature.’

The sculpture, which will float on the lake until September 23, is accompanied by an exhibition at the nearby Serpentine Gallery tracing the barrel-based artworks Christo has created since the 1950s – often with his wife and artistic partner, Jeanne-Claude, who died in 2009.

The pair started experimenting with paint cans and upsized to oil drums, using them to create walls, mounds and other structures both monumental and temporary.

Many of their grander schemes have never been built. Others took decades.

Christo and Jeanne-Claude first dreamed of a floating mastaba – Arabic for bench – in 1967. Initially it was to be built on Lake Michigan. Five decades later, it has finally arisen in London.

Although plenty hated the structure, calling it ‘hideous’, ‘intrusive’ and an ‘ego trip’, others have taken a shine to the installation.

One swimmer said: ‘It makes a change from the wildlife. I’m all in support of good art.’

Another added: ‘There was a beautiful colour to the water this morning from the reflection.’ 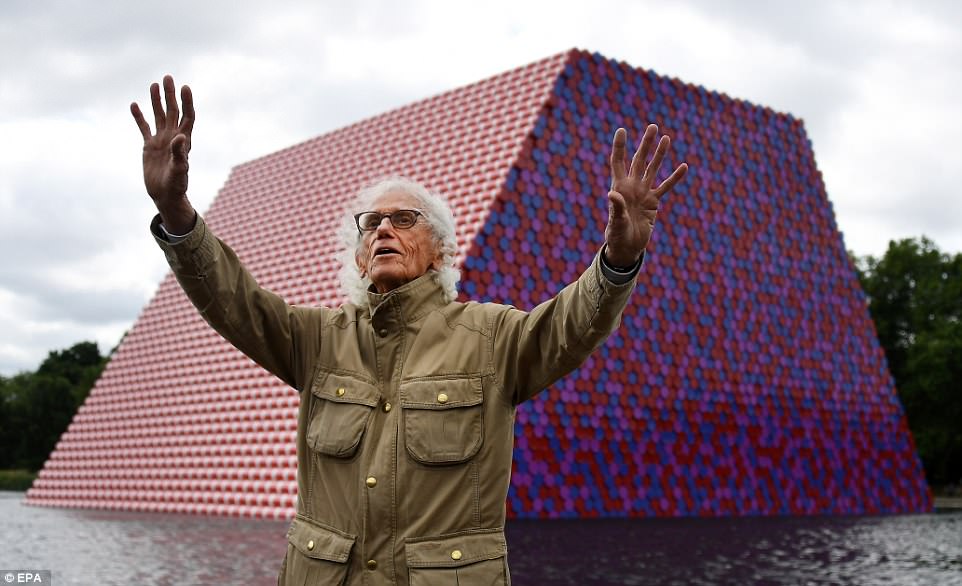 Another claimed the structure, which rises 65 feet (20 meters) above the surface of the park’s Serpentine Lake, added: ‘It’s an affront to nature’

Since 1977, Christo has been planning an even bigger version: a mastaba set in the Abu Dhabi desert that would be made from 410,000 barrels, rise 500 feet (150 meters) and constitute the largest sculpture in the world.

Like Christo’s other works, ‘The London Mastaba’ is temporary. At summer’s end it will be dismantled and the barrels recycled, in keeping with Christo’s ‘leave no trace’ philosophy.

For now, it floats serenely, drawing a mixed reaction from the walkers, joggers and cyclists who use the park each day.

Local Lucia Halpern, who watched the work being constructed in the park over two months, said her cockapoo Coco was a fan, ‘because it keeps the ducks away and she can go in the water.’

But she declared herself ‘a bit disappointed’ by the structure.

‘The only thing I find beautiful about it is the reflection in the water,’ she said. ‘Maybe that’s the point. It’s quite pretty when it gets the light and puts these magenta and pink colors on the water.’

The Bulgaria-born, New York-based Christo is unconcerned about getting divergent reviews.

‘Any interpretation is legitimate – critical or positive,’ he said. ‘All make you think. This is why we are human – to think.’ 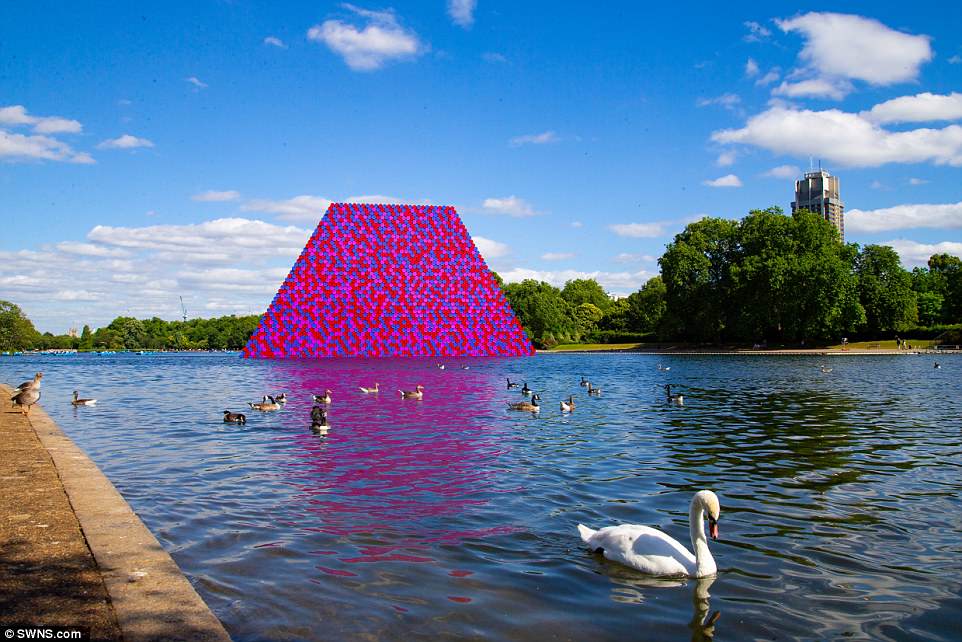 One swimmer did find some positive aspects, saying: ‘There was a beautiful colour to the water this morning from the reflection’ Savannah Chrisley reveals one of her biggest struggles
We and our partners use cookies on this site to improve our service, perform analytics, personalize advertising, measure advertising performance, and remember website preferences.Ok