Sex attacker, 30, who attempted to rape woman while she was asleep in her bed at late night drinks party is jailed for seven years

A sex attacker who forced himself on a woman as she lay asleep in her bed after he got drunk and overstayed his welcome at a party has been jailed for seven years.

Joseph Howell, 30, crept into the victim’s bedroom at 3.30am and tried to rape her as she lay sleeping beside a female friend who had been invited for a sleepover.

The attack occurred in early 2018 after the woman, in her early 20s, had been out in Bolton, Greater Manchester with her female friend.

The pair and several male friends had gone back to a house together but were followed by Howell, who helped buy cider en-route.

The women went to bed and told the men they should leave.

After hearing the door slam shut, they assumed the men had left, but ‘the next thing’ the victim knew, Howell was in bed beside her with her breasts exposed and pyjama bottoms pulled down.

Howell only stopped the sexual assault when the friend was woken up by the terrified victim and said ‘What the f*** Joe, what are you doing?’

At Manchester Crown Court, Howell, from Salford, was convicted of attempted rape and assault. He had denied wrongdoing and his trial had been delayed due to the pandemic. 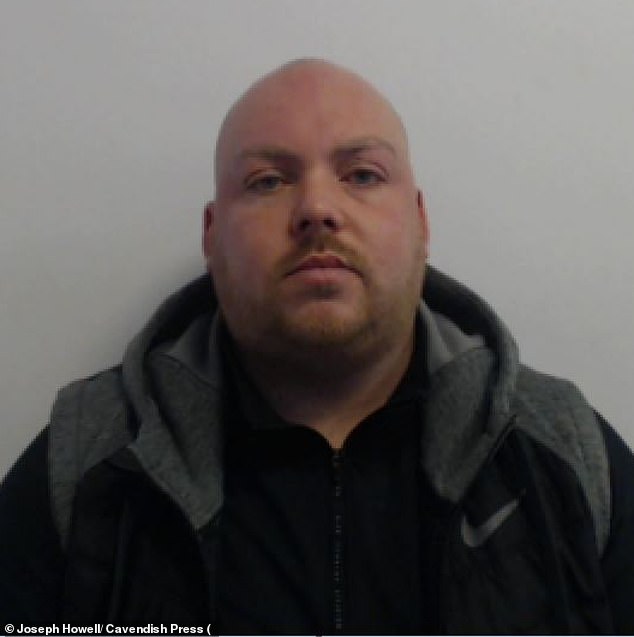 Joseph Howell, 30, crept into the victim’s bedroom at 3.30am and tried to rape her as she lay sleeping beside a female friend who had been invited for a sleepover

Sentencing, judge Recorder Paul Reid QC told him: ‘On that night you and your victim spoke but there was no suggestion she had any sexual interest in you. You targeted her while she was asleep and vulnerable.’

Howell was also banned from contacting the victim for life under the terms of a restraining order and must sign the Sex Offenders Register for life.

Prosecutor Darren Preston had told the court the victim had been ‘making her drinks last’ while they were out and said she was not at all drunk, but the men stayed up and carried on drinking.

He added: ‘The victim woke up at about 3.30am to find someone in the bed beside her.

‘She said when she woke fully she found her breast had been exposed from under her pyjama top and her pyjama bottoms had been pulled down below her bottom.

‘She froze and simply lay there on her side, her back to the defendant, although at this time she did not know who was in the bed.

‘She said she lay there for a couple of minutes and then started to try to wake her friend. He was, she said, ”still messing” with her as she did.

‘She said she edging slowly towards her friend as she didn’t want to make it obvious she had woken up in case he turned violent, and she grabbed her friend’s arm and squeezed it to try to wake her up.’

When the friend woke up the victim tried to gesture with her head that there was someone behind her. As the friend started to ask what was going on, the defendant stopped what he was doing, the court heard.

Mr Preston said: ‘She took her friend’s hand and put it to her lower body to show her that her pyjama bottoms were half off, and her friend then woke properly and said ”What the f*** Joe, what are you doing?”.

‘She took the opportunity of her friend confronting him to get up and out of bed and left… to sit in the car.’

The woman texted an ex-boyfriend and sat sobbing in car for 20 minutes whilst her friend quizzed Howell.

He claimed he gone into the bedroom where the two women were sleeping, as he couldn’t find his keys and then claimed: ‘It just happened – I’m not weirdo.’

In interview with police, he said they had consensual sexual contact before he gave up as there was ‘no room.’

In a statement the victim told police: ‘On that day I was at home thinking I was safe in bed, asleep when I was attacked by him.

‘Since that day my life has been in turmoil as the attack has been on my mind every day. It has now been going on for three years and has affected my sleep.

‘I have had nightmares about it and my anxiety went through the roof in the run up to the trial. I have been given medication. I am now wary of people I don’t know, never go to a party on a whim and I don’t trust people as much as I used to.

‘Some of his friends have threatened me which convinced me to move out of the area for 12 months. I have now had justice and feel relief and justification after all my suffering over the past three years. I want to get on with my life and be happy.’

In mitigation for Howell, defence lawyer James Heyworth said: ‘Entry to her home was not uninvited or forced and it is clear what went on was out of character for him.

‘He is a hard worker with his own business which did employ people, and he has supported his partner, young daughter and children from a previous relationship.’