Sickening moment gang of masked yobs on quad bikes jeer as they mow down four-year-old girl and her grandfather, 67, in shocking hit-and-run attack

This is the moment a four-year-old girl and her 67-year-old grandfather are mown down by a gang of jeering yobs on quad bikes.

The child is left sobbing in agony as the group ride off roaring with laughter after the unprovoked hit and run attack.

A family had been out walking when they were surrounded by bike riders breaking lockdown on playing fields in Doncaster, South Yorkshire on May 5.

The group is first seen tearing along a path across the fields when a woman warns ‘I am filming you’ before she is subjected to a torrent of abuse.

The bikers then turn and charge at the grandfather and hurl him out of shot in the collision. 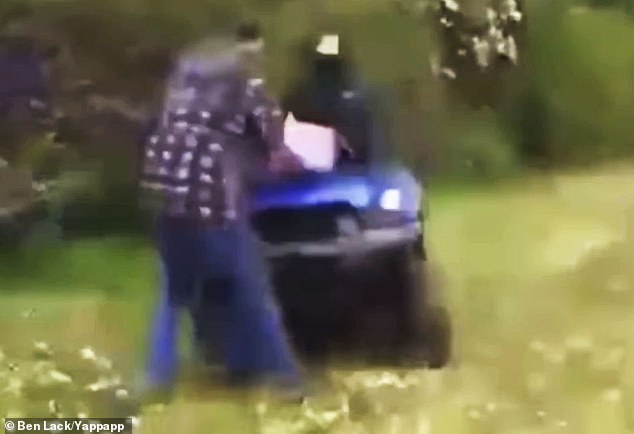 Screaming can be heard in the background as the women realise he has been seriously hurt.

The woman filming also appears to be hit as a second quad bike fills the lens and the phone then seemingly falls to the ground.

The little girl does not appear in the footage but can be heard sobbing out of view.

The woman managers to pick up the phone and aim the camera again to capture the aftermath of the carnage.

The gang then make off standing up in their saddles as members of the family cry in despair. 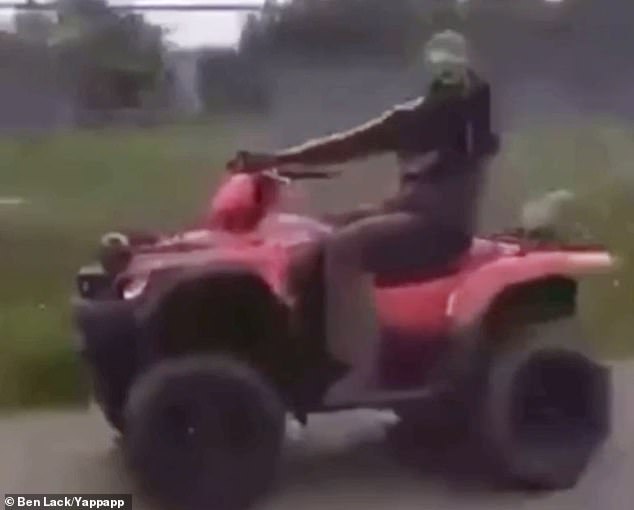 South Yorkshire Police said a 67-year-old man and a four-year-old girl both suffered minor injuries (pictured: One of the quad bikers)

South Yorkshire Police said: ‘Enquiries are on-going into a collision between two pedestrians and an off-road bike following an incident on May 5 at Selby Road in Askern, Doncaster.

‘It is reported that while a family were out walking they were deliberately driven at by a rider on a quad bike.

‘A 67-year-old man and a four-year-old girl both suffered minor injuries.

‘This morning (6 May) warrants were conducted in Highfields and Adwick and two quad bikes believed to be involved in the incident have been seized.

‘Work is on-going to locate the suspect. Kristen Stewart has been making her own fresh pasta in quarantine: impressive?
We and our partners use cookies on this site to improve our service, perform analytics, personalize advertising, measure advertising performance, and remember website preferences.Ok