Stepping out slowly: For many Melburnians, it’ll be a long road back

Claire Bravin and her family almost went to a cafe last Sunday. It was a beautiful day, the sun was shining and COVID-19 restrictions had been eased.

“I baulked at the last minute and my daughter suggested we just order Uber Eats and sit in the courtyard,” Bravin says. 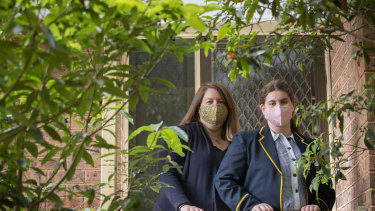 Claire Bravin and her daughter Eleanor are taking a slow and steady approach to re-entry after lockdown.Credit:Jason South

“In an abundance of caution I wanted to see more days with lots of zeros and get a feel for whether restaurants are signing people in and doing the right thing. The government’s messaging for so long has been one of ‘This thing could kill you’, it’s a bit hard to step into the space of ‘It’s OK to go out now’.

After one of the strictest lockdowns in the world, Premier Daniel Andrews is predicting “a summer like no other”.

Victorian government messaging has changed from “Stay home – lives are counting on it” and "Staying apart keeps us together" to “Stay safe, stay open”.

Businesses and institutions – including Melbourne City Council – have launched the campaign Let’s Melbourne Again – encouraging people to get back out. 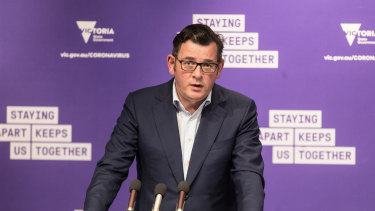 During lockdown the state government’s messaging was staying apart keeps us together.Credit:Simon Schluter

Van Dam says for a long time people have been hearing messaging that it is not safe to go out. Suddenly we are told it’s OK to do so: “For a lot of people, it’s not like a switch flips.”

He says it is still unclear when a vaccine will be available or how effective it will be.

“The virus is still there, there is still a risk,” he says. “The problem people face now is they have to evaluate that risk on their own. There is all this uncertainty. Are things really getting better or is this a honeymoon period and we will have to go back into another lockdown?”

COVID-safe rules – including limits to the number of people in shops – are working smoothly, he says, and not hindering people visiting their favourite stores.

Zahra describes the extension of JobKeeper until March 21 as the last remaining puzzle piece and says it is a well-timed boost for consumers.

“Victorian retailers have a lot of ground to make up after the financial devastation of lockdowns, but we have reason to feel optimistic about the spending patterns so far.”

Lord Mayor Sally Capp has identified bringing office workers safely back to the CBD as a priority, pointing out they make up a large proportion of customers for city businesses.

However national research conducted by McCrindle in June found that when people were thinking about returning to the office their number one reservation was travelling on public transport (86 per cent), followed by consuming communal food (84 per cent) and being in a communal workplace (83 per cent).

More than a third of Australians believed it would take them a few months to feel confident to eat out at restaurants and cafes.

“We really are erring on the side of super-conservatism around this,” social researcher Mark McCrindle says. “Again that’s the sort of attitude the government wanted to foster in the population in the middle of the pandemic, but now it is an attitude it is almost going to have to coax us away from.”

However he believes warmer weather and outdoor dining are likely to woo diners back to restaurants. 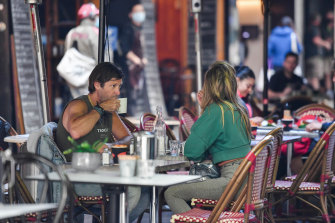 It is hoped that warmer weather will bring Melburnians back to restaurants and cafes. But how many?Credit:Joe Armao

Ian Gason, who lives in Moreland, has been put off by what he describes as “appalling compliance” with mask wearing by patrons and staff at local eateries.

“Obviously they are too self-centred to take this precaution, which doesn’t fill me with confidence,” he says. “I do feel a bit uncomfortable around crowds. People who a few months ago had their mask over their mouth, now have it around their chin. My wife is a chef, I can eat well at home, it’s not really necessary to go out.”

Gason has his first round of club cricket this weekend, the thought of which “is a bit intimidating”. "It’s like reverse culture shock,” he says of life after lockdown. “It’s always harder to come back.”

Psychological scientist and clinical psychologist Professor Kimberley Norris has spent much of her career researching the impact of isolation and confinement on people who work in extreme environments such as Antarctica or fly-in fly-out workers on remote oil rigs.

Norris knew her research would be useful for a future in which humans had colonised planets beyond Earth. What she never anticipated was how relevant it would be to a world upended by a global pandemic.

Life in isolation is largely predictable, she says, which makes people feel in control. People with hectic lives suddenly have time to reflect on what is important to them, such as eating meals with family.

“Even though many people talked about their frustration during lockdown and were champing at the bit to reintegrate into society, the reality is there is a very large minority for whom that is not the case,” Norris says.

Norris says reintegrating is traditionally the most difficult phase of the isolation process.

“Returning to work and the community can mean increased anxiety, irritation, mood fluctuations and a loss of respite and identity for many,” says Norris, an associate professor at the University of Tasmania.

The “reintegration experience” is different for everyone. Norris estimates 30 to 40 per cent of the population will take it at a slower pace. 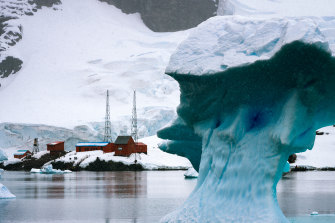 “Over time these individuals can and will engage, but it’s a gradual process,” she says.

“With Antarctic workers, for example, reintegration and adjustment from isolation can take a year or more.”

Those more likely to struggle were the ones who flung themselves back into normal life without giving themselves time to process their isolation experience, leading to burnout.

Norris recommends a smaller catch-up for those feeling overwhelmed rather than a huge get-together with the maximum number of people allowed under restrictions.

“Even though we are re-entering a previously familiar environment, it’s not simply a matter of picking up where we left off. We have changed, society has changed and the world has changed.”