A reveller hit another man over the head with a road sign during a mass brawl on a street in front of shocked onlookers – including one who gives a David Attenborough-style commentary.

Five men and one woman were caught on camera during the fight on Broad Street, in Birmingham, as they punched and kicked each other, right next to a parked highway maintenance truck filled with road signs and traffic cones.

At the start of the night-time footage, believed to be from last weekend, a man wearing a green bomber jacket confronts three of the men, while the woman tries to hold them at bay.

Suddenly, one of the men, who is bald, steps forward and punches the bomber jacket man in the head – causing him to retreat next to the highway vehicle, accompanied by the woman. 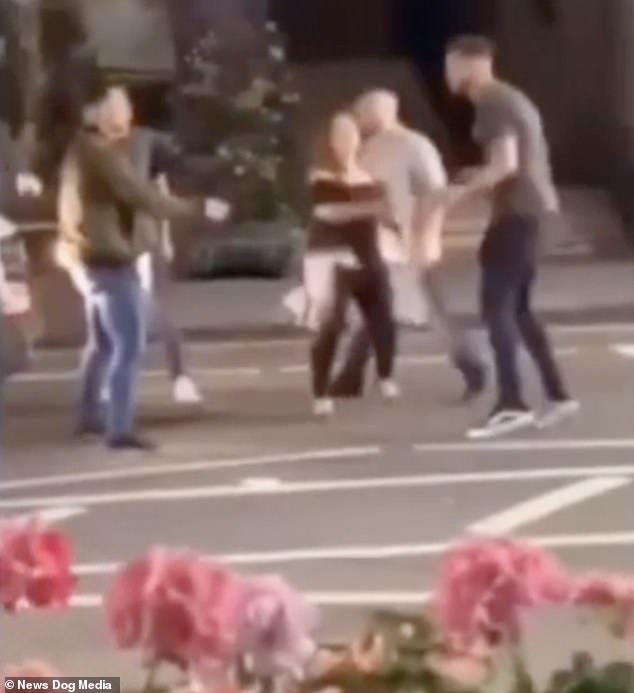 During a street brawl in Broad Street, Birmingham, one reveller (wearing a bomber jacket, left) is confronted by three other men while a woman (also pictured) tries to hold them back 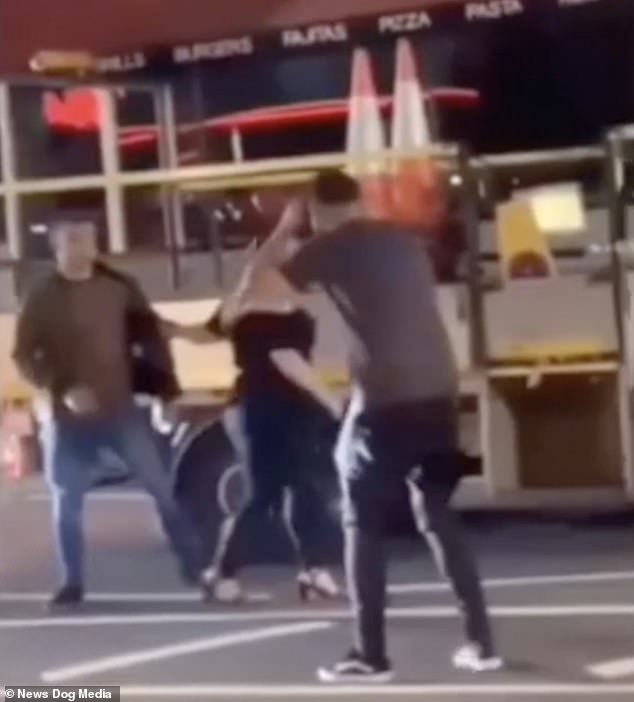 After he is punched in the head by one of the trio, the bomber jacket man retreats next to a parked road maintenance truck filled with signs and traffic cones. As he does so, another of the men, in a grey T-shirt (right), squares up to him 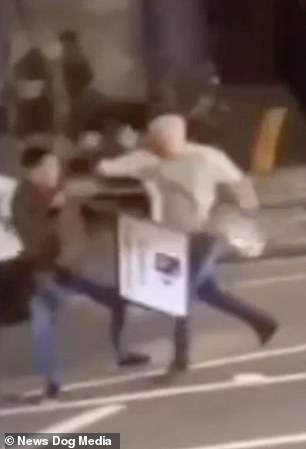 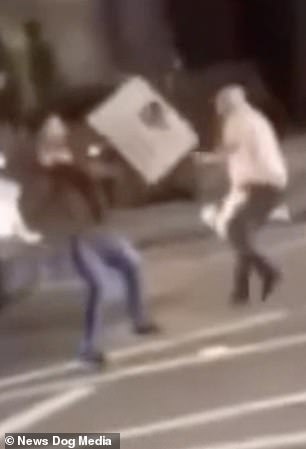 Moments later, the bomber jacket man has grabbed a metal road sign from the vehicle and approaches the same man who punched him earlier.  He then wields the sign in an attempt to counterattack

The unknown cameraman then chimes in with his commentary: ‘Put ’em up! Here we have two young white males going against each other in a war to defend their habitat.’

As the three men start edging towards the man who was punched, one of them, wearing a grey T-shirt, is slapped in the face by the woman – at which point the trio walk away.

While this is happening, the bomber jacket man reaches into the back of the maintenance vehicle and grabs a large metal road sign and starts chasing them. 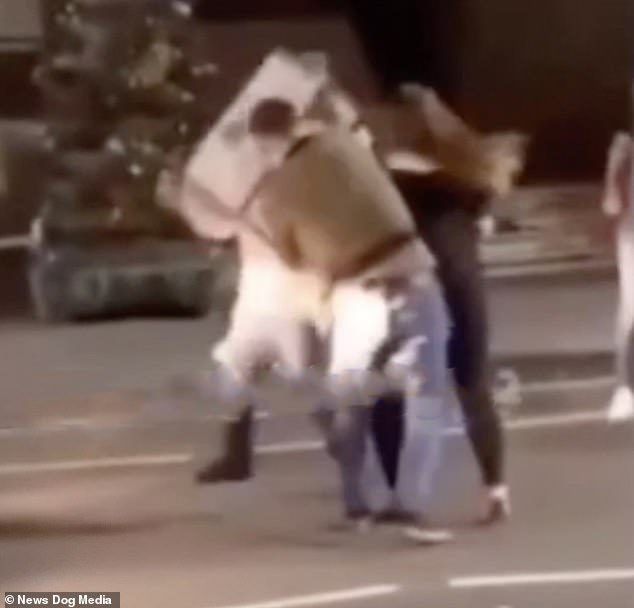 The bomber jacket man smashes the sign over the bald man’s head – but he seems surprisingly unfazed during the incident, which is believed to have occurred last weekend

Two of the men run away but the bald man again punches him in the face while he is being threatened with the sign.

Then, as the woman squares up to the bald man, her friend smashes him over the head with the sign – which, remarkably, seems to have little effect.

After a brief tussle over the sign, it falls to the ground, whereupon it is retrieved by one of two bewildered maintenance workers in hi-viz jackets who are witnessing the fight.

At this point, the bald man’s friends charge at the bomber jacket man and attack him, sending them tumbling to the road.

Suddenly, a fifth man runs into shot and kicks one of the revellers – before he too falls.

Bystanders continue to shriek as the fight comes to an end. The maintenance workers can be seen intervening and dragging the men away from each other.

It is unknown who filmed the footage but the video has been circulating across social media this week. 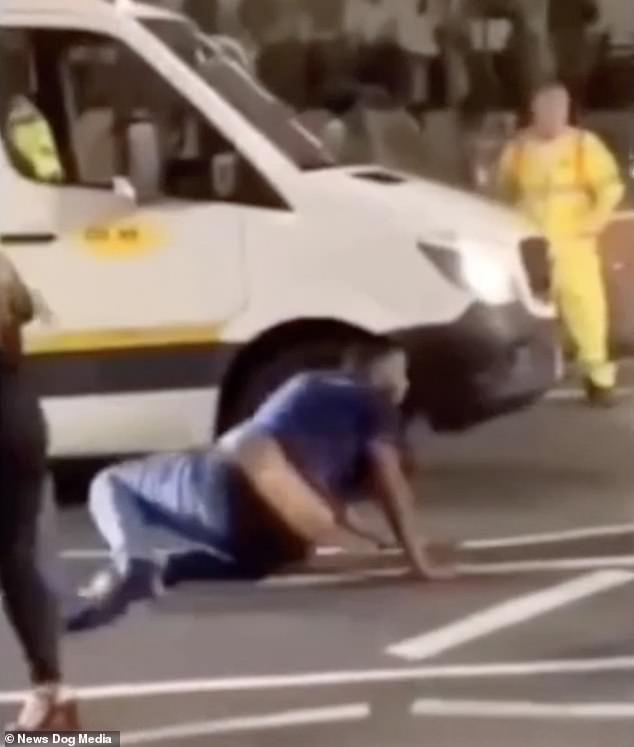 A fifth man appears from out of shot and launches a kick at one of the trio, which sees this latest addition to the fray ending up on the ground 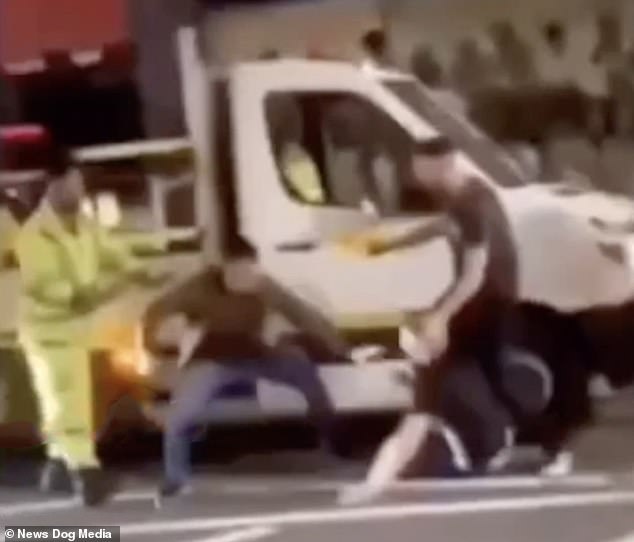 Towards the end of the clip, two bewildered maintenance workers, who have witnessed the brawl, intervene to break up the fight