What sort of idiot orders salt and pepper chicken and then complains it has salt in it?’: Straight-talking takeaway boss hits back at bad online reviews in hilarious fashion

A straight-talking takeaway boss has won praise for hitting back at bad online reviews in a hilarious fashion.

But the restaurant owner is more than ready to put angry punters in their place.

She has joked about not having a ‘crystal ball’ for delivery times, invited customers to show her the ‘right way’ to cook meals and even branded one complainant an ‘idiot.’

Mrs Cheung said she started leaving the hilarious replies after someone complained their vegetarian meal had no meat. 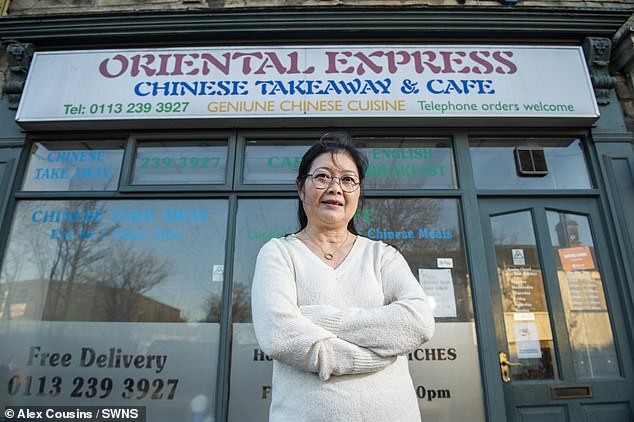 Alice Cheung, 50, has gained praise for how she handles customers complaining about food from the Oriental Express in Leeds 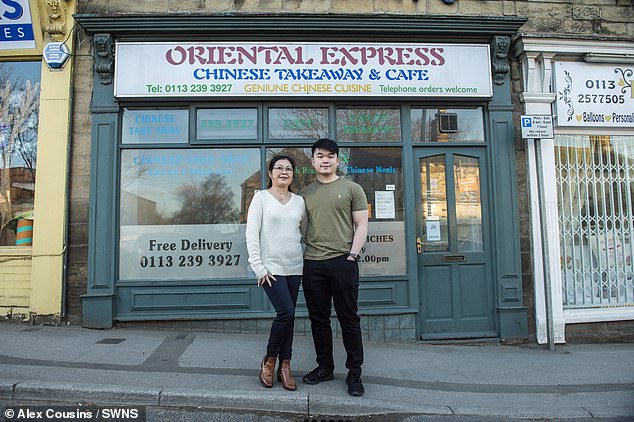 Mrs Cheung, pictured with her son Matthew, 24, has branded customers ‘idiots’ and told another to ‘get off the couch,’ and pick up food themselves after they complained about delivery times

One customer, named Joanne, gave a four star review on Just Eat, but complained the chicken wings she ordered were not ‘cooked properly’.

In a fiery response, the restaurant owner replied: ‘Hi Joanne, please get in touch so we can arrange for you to come in and show us how to cook chicken wing properly.’

Another complainant, named Dan, gave the restaurant a one-star review, prompting Mrs Cheung to reply: ‘What sort of idiot orders ‘Salt and Pepper Chicken’ and then complains it has salt in it,’ before telling he customer to take ‘your foul mouth and business somewhere else’.

Just last month it told one reviewer: ‘We are good but mind reading the stupid is not one of our skills.’

Alice, who has ran the family business in the Pudsey suburb of Leeds since 2004, said: ‘One of the funniest complaints we have had is when someone ordered a vegetarian box and then complained there was no meat

‘That’s when we first started leaving replies, when we noticed that some people were leaving bad reviews about things we weren’t to blame for or just weren’t true. 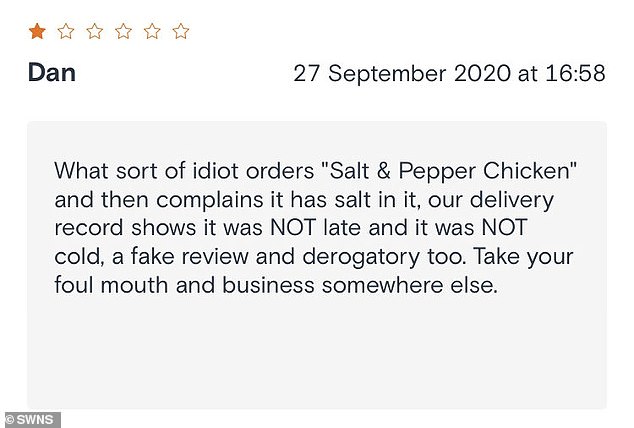 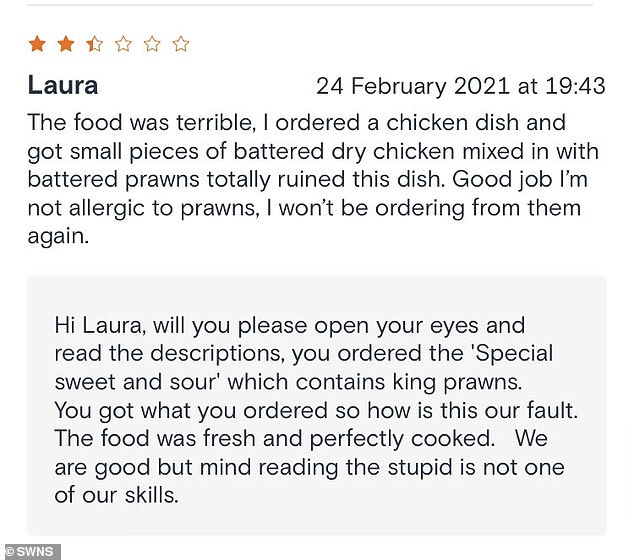 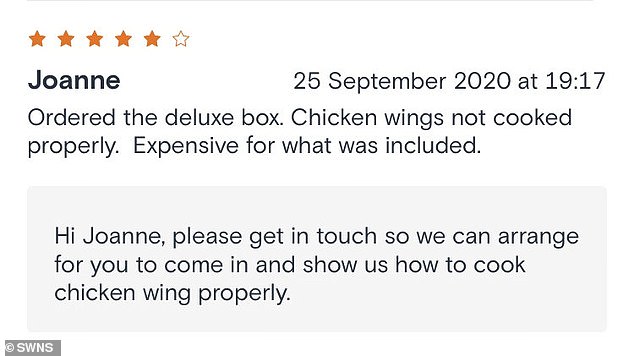 ‘Someone called in once asking for a free meal and they left a bad review on Google because we wouldn’t give them one.

‘It’s like they are using the threat of a bad review to black mail businesses.

‘We just want to be honest with people if we get a bad review. If we are at fault, we will admit to it, but sometimes there are things you can’t control like busy delivery times.

‘We do make mistakes sometimes, we will always do something to compensate, such as free delivery next time you order.

‘If we have messed up, we’ll always hold our hands up. But if not, people should expect some banter.’

The restaurant owner, who has a 24-year-old son, Matthew, told Leeds Live she wanted to give honest answers to what she described as ‘silly comments’

She said: ‘[Negative] reviews tend to put business owners down and demotivate them, I want to be realistic!

‘I think review [responses] should be honest and not corporate responses.’

In December, one customer took exception to being the food was ‘on its way,’ when she called to ask where it was.

Mrs Cheung’s blunt reply was: ‘That is a strange comment, what did you want us to say.’

When another review gave a mediocre two-and-a-half star rating, the restaurant’s tongue-in-cheek reply read: ‘Thank you Tina, let me guess, too much food, too hot, too tasty, delivered too quickly.’

The takeaway has 149 reviews on food ordering website Just Eat, with an overall rating of five stars. The maximum rating a restaurant can have is six stars. 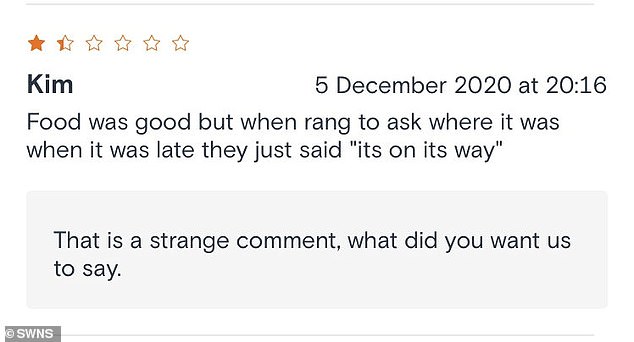 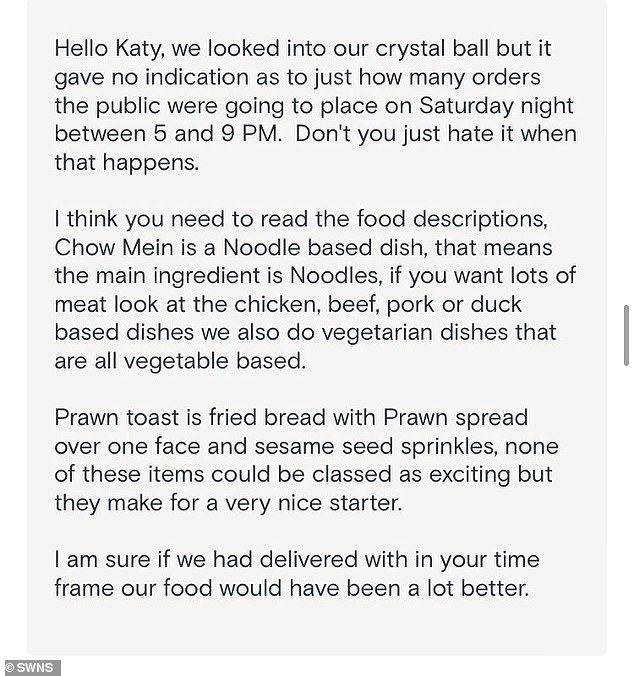 In another reply over a late and incorrect order, Mrs Cheung wrote: ‘But you did get the fod and we replaced the wrong item, and we all this when the side roads and your path were full of snow and ice.

‘You could get off the couch and collected (sic) the food and then you would have had it in 20 minutes.

‘Two and a half hours is an exaggeration. We look forward to not serving you again.’

Mrs Cheung says 95 per cent of the restaurant’s reviews are positive.

While she admits some of the remaining five per cent are due to errors from the restaurant, she urged customers to be honest when leaving reviews.

The business owner said the shop had to adapt to modern technology in recent years, which included ‘troll’ reviews. 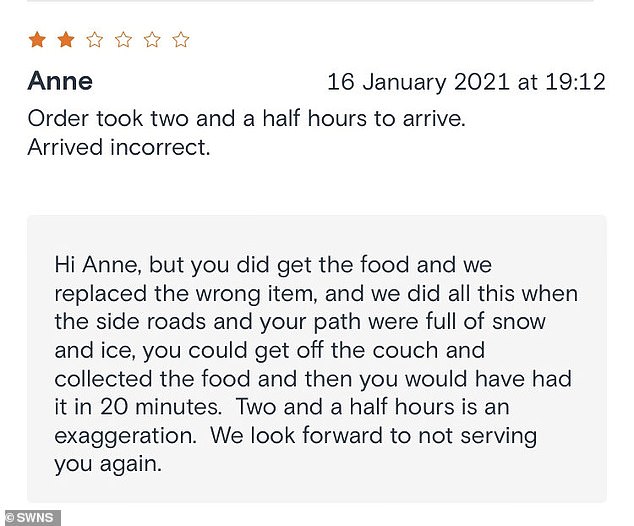 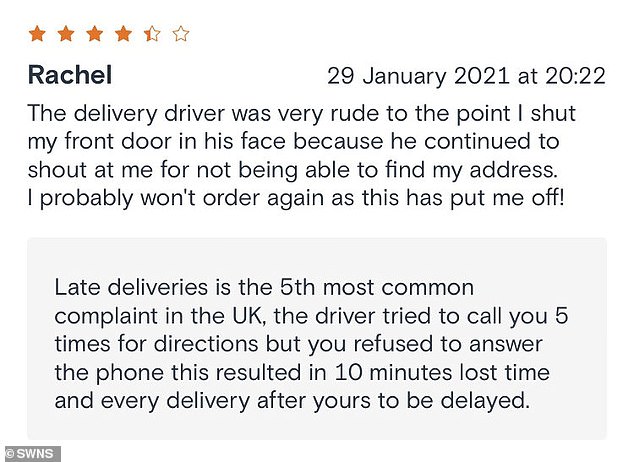 She added: ‘Just Eat and everything has become a big thing so we have had to adjust from the old days of taking calls and writing everything down on a piece of paper.

‘That has given people more of a voice and a platform to say what they think.

‘The majority of our reviews are pretty good, we have a lot of return customers.

‘Sometimes we have reviews where people are just plain rude or will say something that is not true.

‘If people are leaving comments like that there’s a chance they wont come back again anyway, so we tell them how it is.

‘But our regular customers have really loved it and have been supportive of the viral stuff.’