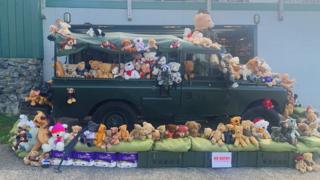 A mass teddy bear hunt is under way around the world to help distract the millions of children locked down because of the coronavirus pandemic.

Stuffed toys are being placed in windows to give children a fun and safe activity while walking around their neighbourhood with parents.

The hunt is inspired by the children’s book We’re Going on a Bear Hunt, written by UK author Michael Rosen.

Teddies have been spotted around the world, including in the UK and US.

New Zealand’s Prime Minister Jacinda Ardern has also joined in, putting two bears in the window of her family house in Wellington.

Tanya Ha, a resident of Melbourne in Australia, told the BBC she had been inspired to put cuddly toys in her window after hearing about other hunts around the world.

Her displays change every day and feature humorous and educational notes aimed at adults, not just kids.

“I’ve always felt a sense of my local community, and being part of it,” Ms Ha said.

Her two children help with ideas for the displays and Ms Ha says working on them has helped to keep her mind occupied amid the angst of the pandemic.

“It’s just fun,” said Ms Ha, who works as a science journalist and broadcaster. “There’s a real buzz in sharing [science] and the delight in how things work around you.”