Teenage thug, 17, nicknamed 'The Devil' is jailed for life for murder

Teenage thug, 17, nicknamed ‘The Devil’ is jailed for life after he stabbed an ex-Army cadet, 27, to death with a Rambo knife in a random attack then posted ‘RIP’ on Facebook

A teenager nicknamed ‘The Devil’ has been jailed for life by a judge who called him ‘one of the most dangerous 17-year-olds I’ve ever come across’ after he stabbed an innocent man to death during a Rambo knife rampage.

Noel Reade, 17, was also ordered to be named and shamed after he used a fearsome Rambo III hunting knife to kill 27-year old Keagan Crimes who was ‘in the wrong place at the wrong time.’

Reade just 16 at the time and in the midst of setting up his own drugs empire and  was said to be acting ‘like a man possessed’ as he stalked the streets of Winsford, Cheshire, looking to ‘stab everyone in his sight.’

During a confrontation outside a convenience store he knifed 27-year old former army cadet Mr Crimes in the chest, penetrating his heart, and he also stabbed and seriously wounded another man who tried to intervene.

Mr Crimes died later in hospital after losing 33 pints of blood. Later Reade, who filtered a selfie to make it look as if he had Devil horns, posted a sarcastic ‘RIP Keagan’ on Facebook.

Inquiries revealed the teenager had previously been among a group of youths who stabbed a man repeatedly telling the youngsters to ‘stick him.’ 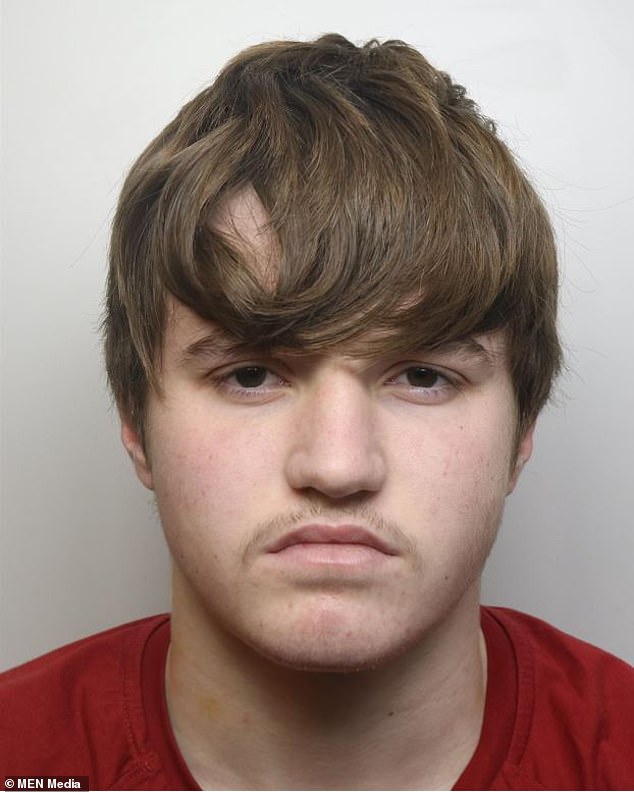 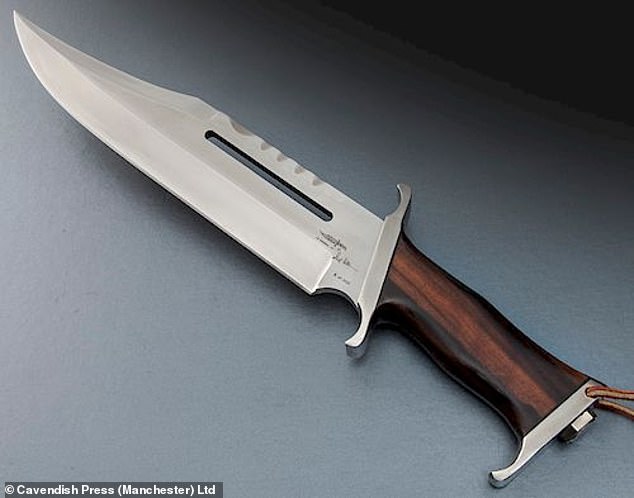 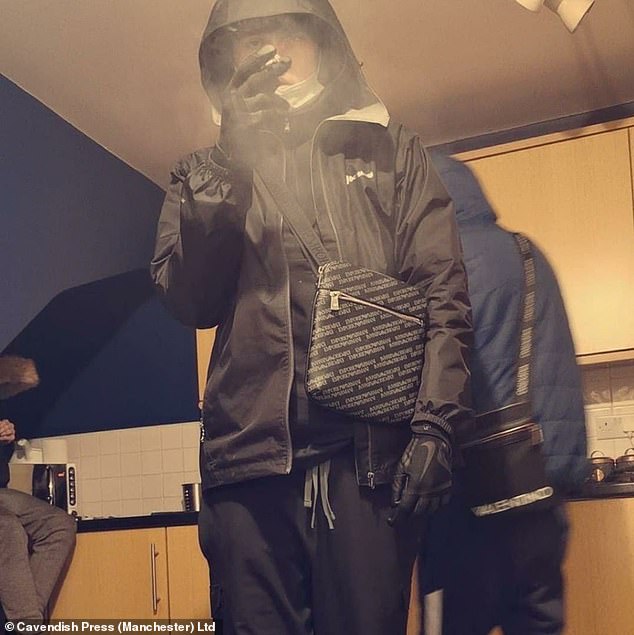 Then just weeks after the murder and as police hunted the culprit, Reade also terrorised a mother and son at knifepoint during a vicious house burglary in which he said: ‘I’m going to kill you – I’m going to slice you up.’

At Chester Crown Court, Reade from Crewe made gang hand gestures and blew kisses to friends in the public gallery as he was ordered to serve a minimum of 19 years.

He was convicted of murder at an earlier hearing but denied the charge with his lawyer claiming he was a ‘little boy lost.’

Sentencing Judge Stephen Everett told Reade: ‘You are one of the most dangerous 17-year-olds I’ve ever come across in my 40 years as a solicitor, barrister and judge. Even at a young age you are a vicious thug who wants to lead others and use violence.

‘You were clearly setting yourself up to be a ringleader, nothing more or less, in the drugs supply in Winsford. You wanted to be the boss and for you severe violence had become a normal way of life. Everybody else came a very poor second.’

He added: ‘You thought you were untouchable. The RIP Keagan post on your Facebook page was not remorse. If you had shown remorse you would have admitted it. Regrettably, it is the sort of thing, a gangster would do. There is absolutely no evidence to suggest Keagan Crimes was going to attack you yet you stabbed him in a vicious way. 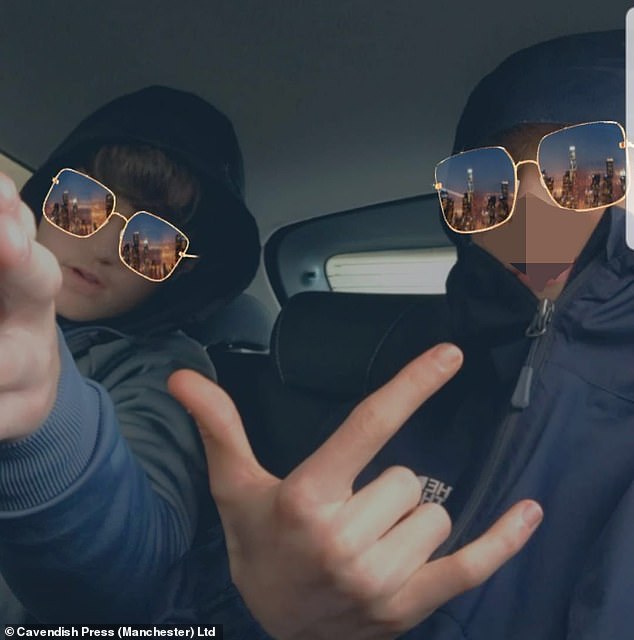 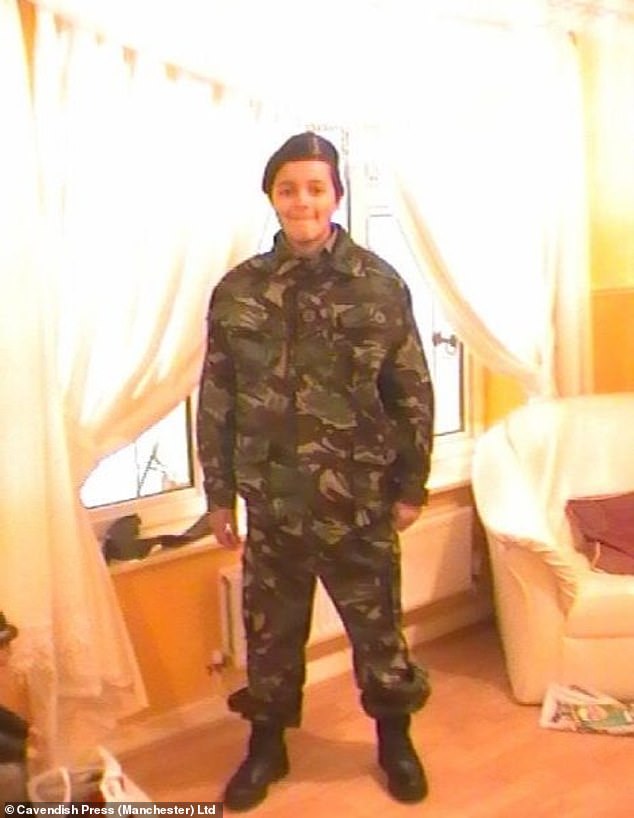 ‘You’re a young thug and that is evidenced by the destruction you have caused over the last few years. I don’t want to hear any more about you being a little boy lost, because you are definitely not.’

The killing occurred on October 11 2020 after Reade and four other teenagers went out looking for two men they suspected of trying to ‘muscle’ in on his drugs racket.

Their targets were spotted inside the Premier Store and as they desperately tried to hold the front door shut Reade who was brandishing the Rambo knife, was seen kicking at it whilst one of his gang smashed the glass with a hammer.

The two men escaped via the stock room door but Reade and his associates re-grouped outside the shop and a confrontation took place between them and a group of the two men’s friends which included Mr Crimes who was celebrating a friend’s birthday.

Reade’s gang fled but the teenager remained, brandishing the knife towards the group and a fight broke out and Mr Crimes was stabbed with fatal consequences. Another man Jason McQuoid, 36, attempted to use a tree branch to swipe out at Reade but he was stabbed in the left shoulder and chest area. A third man was also stabbed.

One eye witness told the trial: ‘I could hear shouting and I saw one of my mates jumping over a fence at the back of the shops saying ‘they’re trying to f***ing stab us’. As I got to the front of the shop, I saw a young lad with a knife trying to swing at people.

‘He was trying to stab everyone in his sight, like a man possessed, trying to kill anyone.’

In a statement to police McQuoid, 32, who has since died following unrelated issues said: ‘I was walking to the chippy and came around the corner and saw Keagan being stabbed.

‘I ran up to the lad and kicked him and then got stabbed myself. It was just some kid and I’d never seen him before in my life. He was carrying a big knife, like a zombie knife. I was stabbed because I was helping my mate.’

Reade later contacted his mother who arranged for a taxi to collect him and bring him home. Police traced him after his DNA was found at the murder scene. In the wake of the killing he had Googled phrases such as ‘does blood wash off shoes’, ‘Rambo III knives’ and ‘guns.’ He buried the knife and it has never been recovered.

His lawyer Michael Hayton QC said: ‘During the latter half of 2020 he was clearly out of control but he was still a youth when he carried out these crimes. It was someone acting the big man and embarking upon a new friendship with those clearly carrying out criminality.’

‘He is someone not beyond hope, with a basic intelligence to move on in life. He might not be an angel and you might not want him living next door, but we suggest this was a little boy lost.’

Two other boys then aged 15 and 16 were given 12 month youth referral orders at an earlier hearing after admitting affray.

After the hearing Mr Crimes’s mother said in a statement: ‘Keagan was a smashing lad, was liked by all of his friends, the life and soul of any gathering. ‘The thought of our lad, our Keagan, no longer being here, pains us every single day.’

‘It’s made so much worse knowing he was taken away from us so cruelly and needlessly as Keagan was at the wrong place at the wrong time.’

Det Insp Adam Waller, who led the investigation, said: ‘Throughout the investigation and trial, Reade has shown no remorse for his actions. Keagan’s family have had to sit through and listen to distressing evidence, reliving his last hours that no-one should ever have to listen to.’