THIS is the terrifying moment a man films a massive spider crawling along the handlebars of his quadbike and then jumping on him.

Metui Tongatua can be heard screaming for his daughter to flee after spotting the dinner plate sized huntsman spider as it climbed up through the quadbike’s engine. 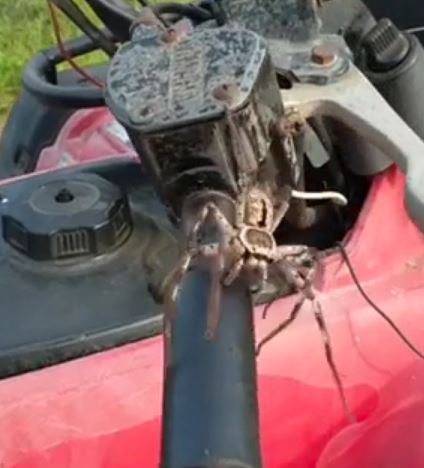 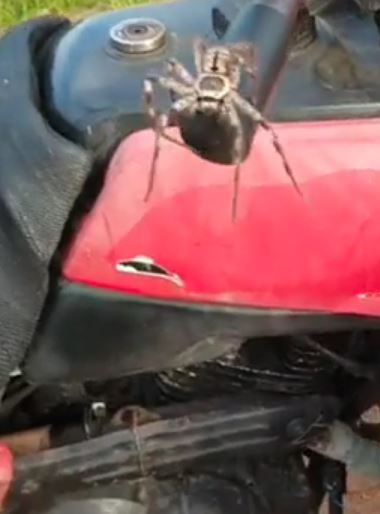 He had been driving down a deserted road in North Queensland with his two dogs and daughter in the back trailer on Sunday, March 28.

But things took turn for the worse when the fearsome looking beast began advancing towards him and then jumped on him.

He lets loose a volley of four letter expletives after he toldhis daughter to get off the trailer.

According to Arachnologist Dr Robert Raven, said the vibrations from the quad bike attract spiders at a “rocket speed”.

The spiders gather and behave erratically if the vehicle is an older model and runs on diesel, he explained. 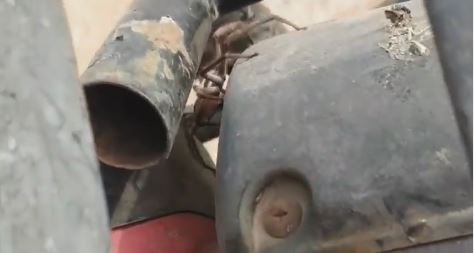 “We don't know why but spiders will cover your tyres and become stirred up from the engine creating the deep vibrations,” said Dr Raven from the Queensland Museum.

Huntsman spiders are renowned for the enormous size, with males able to achieve a leg span of between 10 and 12 inches.

Adult Huntsman spiders do not build webs but forage for food use venom to stun their prey and aid in digestion but the poison is not deadly to humans.

Their diet mainly consists of insects but they are also known to eat small reptiles such as skinks and gekkos.

In Australia a huntsman spider was seen dragging a dead mouse up the side of a fridge.

They are sometimes called giant crab spiders or wood spiders because they like to live in woody areas such as forests, sheds, and woodpiles.

They live in warm tropical climates across the world in places such as Australasia, Asia, Africa, the Americas, and the Mediterranean Basin.

They are common in Australia but have been introduced accidentally to parts of the USA, Pakistan, India, China, and Japan.