In October, if everything falls into place, an 787 Dreamliner charter flight will depart London Heathrow bound for Australia with a very unusual passenger list.

On board, in the cabin sharing airline seats with passengers, will be up to 40 pets. 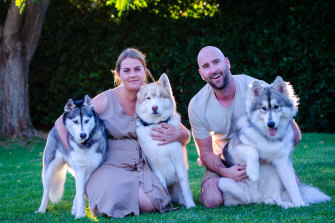 The charter flight is in response to the difficulties expats have experienced in getting their animals to and from Australia. It’s a feat that involves rabies tests, import permits and booking space at the Department of Agriculture, Water and the Environment’s Post-Entry Quarantine facility in Mickleham for the compulsory 10-day quarantine stay.

Airlines have also stopped flying many dogs, including snub-nosed breeds, in cargo holds due to fears they will have difficulty breathing and might die.

West Australian resident Joanna Maddison has formed a company, Skye Pet Travel, to organise a charter flight from London to Melbourne on October 5 – and back again from Melbourne to London on October 9 – to transport her own dogs and allow other Australians to bring theirs home.

Last week The Sunday Age and The Sun-Herald reported on a couple who spent $25,000 importing their two rescue cats from Malaysia to Australia.

The cost of a Melbourne to London ticket aboard Maddison’s charter is $10,000 for one passenger and one pet. That secures six economy class seats, allowing a pet crate to be secured to one row of seats. Two passengers and one pet would cost $11,500.

“Pets can come out of the crate once the plane is airborne,” Maddison said.

The health and safety officer, who has never organised a charter flight before, plans to be on the return flight to Britain, with husband Liam, to live with their Siberian huskies and malamute-cross, named Skye, Jazz and Roux.

“I didn’t want to put them through that trauma of the journey in cargo and likely have to stay overnight in foreign country. I am an anxious person in that way when it comes to their welfare,” Maddison said.

She is in negotiations with a charter company and expects to sign a contract within weeks for a 787 Dreamliner, operated by a member of the Star Alliance.

Maddison said she was in contact with the Post-Entry Quarantine facility to arrange the acceptance of a large number of pets but does not expect final details to be confirmed until two months before the flight.

Currently, 65 per cent of seats have been reserved on each leg, but Maddison needs 100 per cent for the flights to take place.

“The margins are very small, this is something very close to my heart – there should be more options for pets because they are our family,” Maddison said.

But many in the community are sceptical that Skye Pet Travel can overcome the formidable logistics required. Skye Pet Travel was removed from one Facebook group for violating its no advertisement rule. 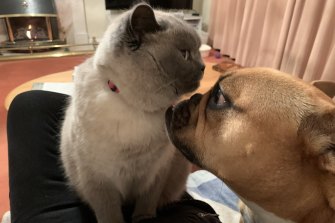 “There are risks as it has not been done before,” said Allison Cranwell, who with her husband David Weight want to book the flight to transport Misty, their four-year-old British shorthair colourpoint cat, and Molly, a four-year-old French bulldog and old tyme bulldog-cross, from London to Australia.

“When we got them, we swore they were ours for life. It’s the commitment and love for our pets that make us knowingly put our pets through this, we don’t want to leave them behind,” said Cranwell, a contracts administrator.

Cranwell has estimated the charter flight would be about the same cost as the couple relocating and flying the pets as cargo. “The extra amount is a small price to pay for the pets’ wellbeing.” 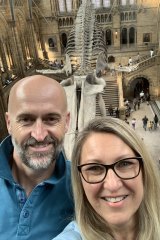 Allison Cranwell and husband David Weight hope to fly their two pets from London to Australia.

She acknowledged the complicated process of obtaining rabies vaccinations, tests and results, and a 180-day waiting period before flying. Plus import permits and a booking at the Post-Entry Quarantine facility. “All the many milestones can fall over at any time.”

The charter company will organise aircraft logistics and permits and all import permits and quarantine bookings must be made no later than two months before arrival.

It has sourced an operator who will allow the pets in the plane’s cabin.

Maddison says her company is working with Airpets UK to ensure compliance with all animal import documentation, including a vet schedule with all vaccination and test requirements, a health certificate and parasite treatment and an airway bill document.