The Trump convention starts tonight as he travels to North Carolina

The Donald Trump convention starts tonight: President to travel to North Carolina before speaking four nights in a row as party agrees on platform with NO policy except supporting him for a second term

Donald Trump will start his week off in North Carolina Monday as he prepares to speak during the 10:00 p.m. hour all four nights of the Republican National Convention, where he will officially accept his nomination to run for reelection on Thursday.

Other than backing Trump, the Republican National Committee has not agreed on any other platform for the 2020 convention as the president is prepared to focus on the accomplishments of his first term rather than presenting plans for a second.

In a new resolution adopted Saturday from the previous 2016 platform, the RNC made six declarations and resolved four issues – but otherwise kept the four-year-old platform the same.

‘RESOLVED, That the Republican Party has and will continue to enthusiastically support the President’s America-first agenda,’ the RNC listed.

One of Trump’s unofficial 2020 slogans is, ‘Promises Made, Promises Kept,’ which will be on full display all four nights of the convention. 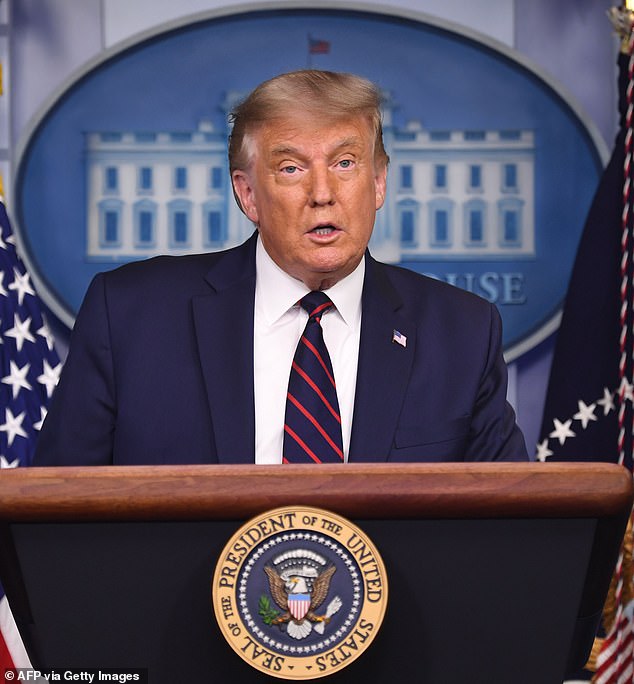 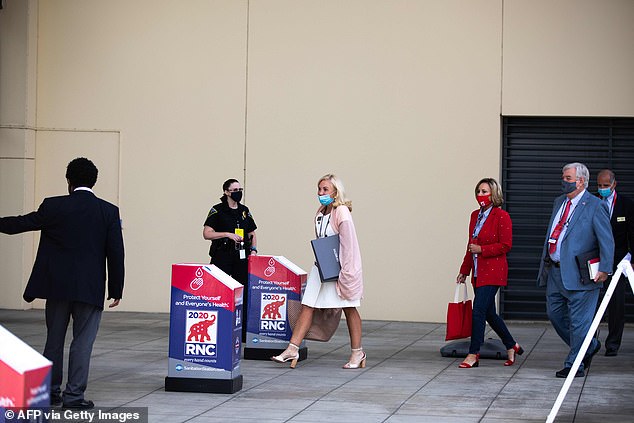 Delegates arrived in Charlotte, North Carolina – the original location of the convention – over the weekend as many speakers prepare to make their remarks remotely in the midst of the coronavirus pandemic 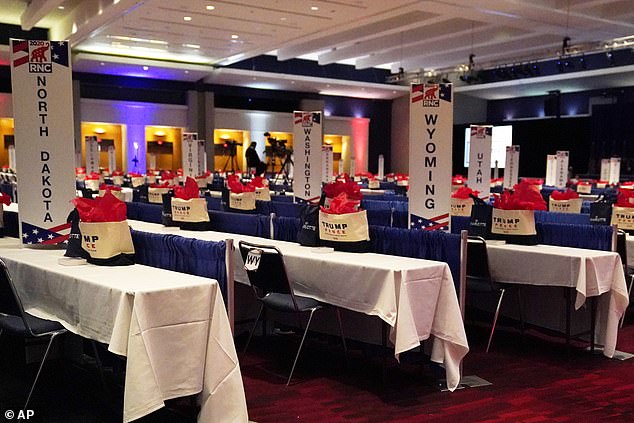 While the RNC will not be fully virtual like the Democratic Convention was last week, the in-person events are severely scaled down 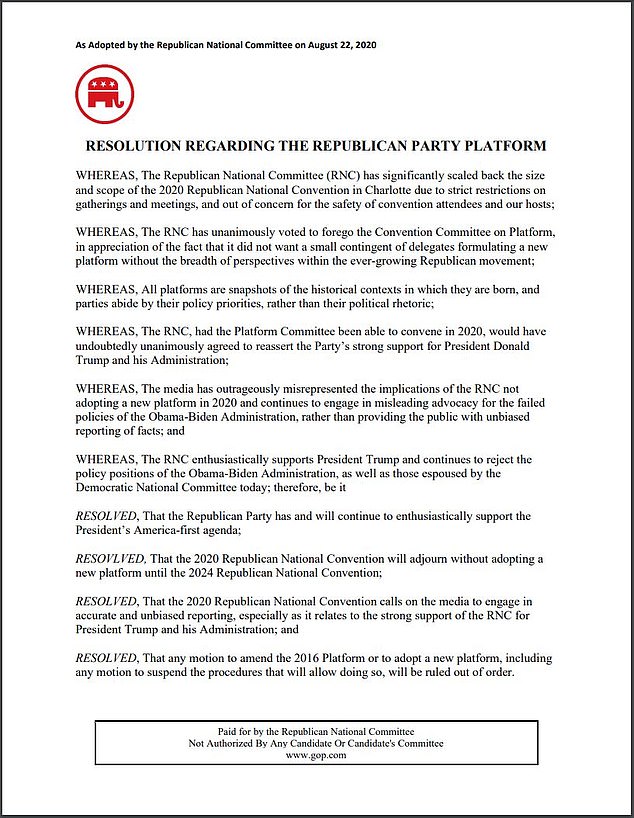 The RNC released a resolution on its 2020 platform that said it will not adopt a new platform from 2016 until 2024, but did reaffirm it will ‘enthusiastically support the President’s America-first agenda’

‘The RNC enthusiastically supports President Trump and continues to reject the policy positions of the Obama-Biden Administration, as well as those espoused by the Democratic National Committee today; therefore, be it RESOLVED, That the Republican Party has and will continue to enthusiastically support the President’s America-first agenda,’ the RNC 2020 resolution reads.

The quadrennial event this year will also, in part, be put on by two producers who worked on ‘The Apprentice,’ the show where businessman Trump rose to reality television stardom.

Sadoux Kim is a longtime deputy to the show’s creator and is a lead consultant on the production of the convention. He served as a Miss Universe judge in the past when Trump owned the pageant.

Chuck LaBella, a former NBC entertainment executive, is also on the RNC payroll. He helped produce ‘The Comedy Central Roast of Donald Trump.’

The convention this year will feature more logistical challenges as several speakers will join from remote locations in the midst of the coronavirus pandemic – similar to the Democratic convention last week.

The speaker line-up, which was released this weekend, is full of staunch Trump allies, both on and off Capitol Hill.

Traditionally, the party’s nominee only delivers remarks one night of the four-night nominating convention.

Democratic nominee Joe Biden did make appearances each night of his nominating events last week, but only made a keynote address on the final night on Thursday. 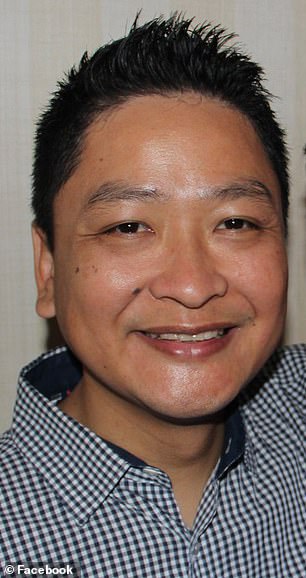 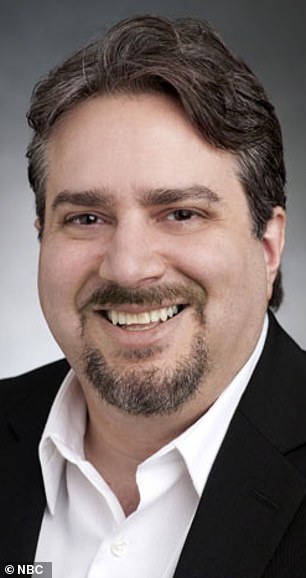 The Republican Convention has been partially planned and will be put on by two producers Sadoux Kim (left) and Chuck LaBella (right) who worked on ‘The Apprentice,’ the show where Trump rose to reality television stardom

Initially Trump all the events were scheduled to take place in Charlotte, North Carolina. Once the state’s Governor Roy Cooper decided large gathers would not be permitted in the midst of the pandemic, Trump moved his speech – and most of the marquee events – to Jacksonville, Florida where, at the time, lockdown orders were less restrictive.

As the Sunshine State went back into lockdown after experiencing a spike over the summer, Trump was forced to rethink his plans again.

The president will make his acceptance speech from the White House on Thursday and several other events and remarks during the convention will take place in federal grounds and buildings.

The president’s top campaign aides have spent the last few weeks scrambling to come up with a platform for the next four years as the makeup of the convention changed yet again.

Senior administration officials have admitted that they are learning toward pledging Trump will continue working toward hallmarks of his first term instead of presenting entirely new ideas in order for the president to appeal to his base and respond to criticism from his own party.

Steve Scalise, House Republican Whip and Louisiana representative who was shot during a congressional baseball game practice in June 2017

Natalie Harp, on the campaign’s advisory board and healthcare advocate

Kim Klacik, black Republican running for Congress in Baltimore who went viral after urging black voters to break from Democrats

Mark and Patricia McCloskey, St. Louis couple who faced felony charges for defending their home by wielding guns at protesters passing their home

Mary Ann Mendoza, ‘Angel Mom’ who lost her police officer son in 2014 after he was in a head-on car collision with an illegal alien

Nicholas Sandmann, teenager whose confrontation with a Native American activist while wearing a MAGA hat near the Lincoln Memorial went viral

Sister Dede Byrne, member of the Little Workers of the Sacred Hearts of Jesus and Mary

Ryan Holets, police officer known for adopting the baby of a homeless Heroin addicted woman he found behind a gas station

Jeff Van Drew, New Jersey representative who flipped from Democrat to Republican in the middle of his term

Ann Dorn, widow of retired St. Louis police captain David Dorn Dorn was shot and killed on June 2 at a pawn shop where he served as a security guard

Carl and Marsha Mueller, parents of Kayla Mueller, a humanitarian worker who was tortured and killed by ISIS